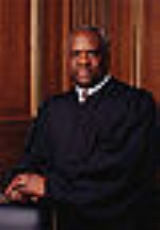 Thomas grew up in Georgia
Georgia (U.S. state)
Georgia is a state located in the southeastern United States. It was established in 1732, the last of the original Thirteen Colonies. The state is named after King George II of Great Britain. Georgia was the fourth state to ratify the United States Constitution, on January 2, 1788...
and was educated at the College of the Holy Cross
College of the Holy Cross
The College of the Holy Cross is an undergraduate Roman Catholic liberal arts college located in Worcester, Massachusetts, USA...
and at Yale Law School
Yale Law School
Yale Law School, or YLS, is the law school of Yale University in New Haven, Connecticut, United States. Established in 1824, it offers the J.D., LL.M., J.S.D. and M.S.L. degrees in law. It also hosts visiting scholars, visiting researchers and a number of legal research centers...
. In 1974, he was appointed an Assistant Attorney General
Missouri Attorney General
The Office of the Missouri Attorney General was created in 1806 when Missouri was part of the Louisiana Territory. Missouri's first Constitution in 1820 provided for an appointed Attorney General, but since the 1865 Constitution, the Attorney General has been elected...
in Missouri
Missouri
Missouri is a US state located in the Midwestern United States, bordered by Iowa, Illinois, Kentucky, Tennessee, Arkansas, Oklahoma, Kansas and Nebraska. With a 2010 population of 5,988,927, Missouri is the 18th most populous state in the nation and the fifth most populous in the Midwest. It...
and subsequently practiced law there in the private sector. In 1979, he became a legislative assistant
Legislative assistant
A legislative assistant is a legislative staffer who works for a legislator by monitoring pending legislation, conducting research, drafting legislation, giving advice and counsel, and making recommendations....
to Missouri United States Senator John Danforth
John Danforth
John Claggett "Jack" Danforth is a former United States Ambassador to the United Nations and former Republican United States Senator from Missouri. He is an ordained Episcopal priest. Danforth is married to Sally D. Danforth and has five adult children.-Education and early career:Danforth was born...
and in 1981 was appointed Assistant Secretary for Civil Rights at the U.S.

For a time we wondered why our real father didn't come and rescue us, but we had long since accepted our fate by the time we finally met him.

Long after the fact, it occurred to me that this was a metaphor for life- blisters come before calluses, vulnerability before maturity- but not even the thickest of skins could have spared us the lash of Daddy's tongue.

I began to suspect that Daddy had been right all along: the only hope I had of changing the world was to change myself first.

The black people I knew came from different places and backgrounds- social, economic, even ethnic- yet the color of our skin was somehow supposed to make us identical in spite of our differences. I didn't buy it. Of course we had all experienced racism in one way or another, but did that mean that we had to think alike?

The popular political answers of the day, I saw, had hardened into dogma, making anyone who questioned them a heretic. Having turned my back on religion, I saw no reason to accept mere political opinions as gospel truth. Years later these same dogmatists would walk away from the wreckage of their failed policies, like children tossing aside a broken toy. But the victims they left behind were real people- my people.

How often had he longed to hold us, hug us, grant our every wish, but held himself back for fear of letting us see his vulnerability, believing as he did that real love demanded not affection but discipline?

I knew that until I was ready to tell the truth as I saw it, I was no better than a politician- but I didn't know whether I would ever be brave enough to break ranks and speak my mind.