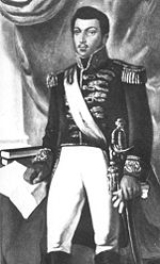 Encyclopedia
Alexandre Sabès Pétion was President of the Republic of Haiti
Haiti
Haiti , officially the Republic of Haiti , is a Caribbean country. It occupies the western, smaller portion of the island of Hispaniola, in the Greater Antillean archipelago, which it shares with the Dominican Republic. Ayiti was the indigenous Taíno or Amerindian name for the island...
from 1806 until his death. He is considered as one of Haiti's founding fathers, together with Toussaint Louverture, Jean-Jacques Dessalines
Jean-Jacques Dessalines
Jean-Jacques Dessalines was a leader of the Haitian Revolution and the first ruler of an independent Haiti under the 1801 constitution. Initially regarded as Governor-General, Dessalines later named himself Emperor Jacques I of Haiti...
, and his rival Henri Christophe
Henri Christophe
Henri Christophe was a key leader in the Haitian Revolution, winning independence from France in 1804. On 17 February 1807, after the creation of a separate nation in the north, Christophe was elected President of the State of Haiti...
.

Pétion was born in Port-au-Prince
Port-au-Prince
Port-au-Prince is the capital and largest city of the Caribbean nation of Haiti. The city's population was 704,776 as of the 2003 census, and was officially estimated to have reached 897,859 in 2009....
to a Haitian mother and a wealthy French
French people
The French are a nation that share a common French culture and speak the French language as a mother tongue. Historically, the French population are descended from peoples of Celtic, Latin and Germanic origin, and are today a mixture of several ethnic groups...
white father. Like other gens de couleur
Gens de couleur
Gens de couleur is a French term meaning "people of color." The term was commonly used in France's West Indian colonies prior to the abolition of slavery, where it was a short form of gens de couleur libres ....
libre with wealthy fathers, Pétion was sent to France
France
The French Republic , The French Republic , The French Republic , (commonly known as France , is a unitary semi-presidential republic in Western Europe with several overseas territories and islands located on other continents and in the Indian, Pacific, and Atlantic oceans. Metropolitan France...
in 1788 to be educated and study at the Military Academy in Paris. In Saint-Domingue, many gens de couleur, often freed by their fathers, constituted a third caste between the whites and enslaved Africans. While restricted in political rights, many became educated and wealthy landowners, resented by the petits blancs, who were minor tradesmen. Before the slave uprising of 1791, they led a rebellion to gain voting and political rights they believed due them as French citizens after the French Revolution. At that time most did not support freedom or political rights for enslaved Africans and blacks.

Pétion returned to Saint-Domingue as a young man to take part in the Créole expulsion of the British from Saint-Domingue (1798–99). There had long been racial and class tensions between gens de couleur and enslaved Africans and free blacks in Saint-Domingue, where slaves outnumbered whites and gens de couleur by ten to one. During the years of warfare against planters or grand blancs, Spanish, English, and French racial tensions were exacerbated in competition for power and political alliances.

When tensions arose between blacks and mulattoes, Pétion often supported the mulatto faction. He allied with General André Rigaud
André Rigaud
Benoit Joseph André Rigaud was the leading mulatto military leader during the Haïtian Revolution. Among his protégés were Alexandre Pétion and Jean-Pierre Boyer, both future presidents of Haïti.-The revolutionary:...
and Jean Pierre Boyer
Jean Pierre Boyer
Jean-Pierre Boyer , a native of Saint-Domingue, was a soldier, one of the leaders of the Haitian Revolution, and President of Haiti from 1818 to 1843. He reunited the north and south of Haiti in 1820 and also invaded and took control of Santo Domingo, which brought all of Hispaniola under one...
against Toussaint L'Ouverture
Toussaint L'Ouverture
François-Dominique Toussaint Louverture , also Toussaint Bréda, Toussaint-Louverture was the leader of the Haitian Revolution. His military genius and political acumen led to the establishment of the independent black state of Haiti, transforming an entire society of slaves into a free,...
in a failed rebellion, the so-called "War of Knives", in the South of Saint-Domingue, which began in June 1799. By November the rebels were pushed back to the strategic southern port of Jacmel
Jacmel
Jacmel, also known by its indigenous Taíno name of Yaquimel, is a town in southern Haiti founded in 1698. It is the capital of the department of Sud-Est and has an estimated population of 40,000, while the municipality of Jacmel had a population of 137,966 at the 2003 Census.The buildings are...
; the defence was commanded by Pétion. The town fell in March 1800 and the rebellion was effectively over. Pétion and other mulatto leaders went into exile in France.

In February 1802, General Charles Leclerc
Charles Leclerc
Charles Victoire Emmanuel Leclerc was a French Army general and husband to Pauline Bonaparte, sister to Napoleon Bonaparte.-To 1801:...
arrived with tens of warships and 82,000 French troops to bring Saint-Domingue under more control. Gens de couleur Petion, Boyer and Rigaud returned with him in the hope of securing power in the colony.

Following the French deportation of Toussaint Louverture and the renewed struggle, Pétion joined the nationalist force in October 1802. This followed a secret conference at Arcahaie, where Pétion supported Jean-Jacques Dessalines
Jean-Jacques Dessalines
Jean-Jacques Dessalines was a leader of the Haitian Revolution and the first ruler of an independent Haiti under the 1801 constitution. Initially regarded as Governor-General, Dessalines later named himself Emperor Jacques I of Haiti...
, the general who had captured Jacmel. The rebels took the capital of Port-au-Prince
Port-au-Prince
Port-au-Prince is the capital and largest city of the Caribbean nation of Haiti. The city's population was 704,776 as of the 2003 census, and was officially estimated to have reached 897,859 in 2009....
on October 17, 1803. Dessalines proclaimed independence on January 1, 1804, naming the nation Haiti. On October 6, 1804, Dessalines declared himself ruler for life and was crowned emperor.

Following the assassination
Assassination
To carry out an assassination is "to murder by a sudden and/or secret attack, often for political reasons." Alternatively, assassination may be defined as "the act of deliberately killing someone, especially a public figure, usually for hire or for political reasons."An assassination may be...
of Dessalines on October 17, 1806, Pétion championed the ideals of democracy and clashed with Henri Christophe
Henri Christophe
Henri Christophe was a key leader in the Haitian Revolution, winning independence from France in 1804. On 17 February 1807, after the creation of a separate nation in the north, Christophe was elected President of the State of Haiti...
who wanted absolute rule. Christophe was elected president, but he did not believe the position had sufficient power, as Petion kept powers for himself. Christophe went to the north with his followers and established an autocracy. The loyalties of the country divided between them, and the tensions between the blacks and mulattoes were reignited once again.

After the inconclusive struggle dragged on until 1810, a peace treaty was agreed and the country was split in two. While Christophe made himself king of the northern Kingdom of Haiti
Kingdom of Haiti
The Kingdom of Haiti was the state established by Henri Christophe on March 28, 1811 when he was proclaimed King Henri I having previously ruled as president. This was Haiti's second attempt at monarchal rule as Jean-Jacques Dessalines had previously ruled over the Empire of Haiti...
, Pétion was elected President of the southern part of Haiti in 1806.

Pétion seized commercial plantations from the rich gentry. The land was redistributed to his supporters and the peasantry, earning him the nickname Papa Bon-Cœur ("good-hearted father"). The land seizures and changes in agriculture unfortunately dealt a serious blow to the export-economy. Most of the population proceeded to become full subsistence farmers and so exports and state-revenue declined sharply.

Believing in the importance of education, Pétion started the Lycée Pétion in Port-au-Prince. Petion's virtues and ideals of freedom and democracy for the world (and especially slaves) were strong and he often showed support for the oppressed. He gave sanctuary to independence leader Simón Bolívar
Simón Bolívar
Simón José Antonio de la Santísima Trinidad Bolívar y Palacios Ponte y Yeiter, commonly known as Simón Bolívar was a Venezuelan military and political leader...
in 1815 and provided him with material and infantry support. This was vital aid played a defining role in Bolivar's success in liberating the countries of what would make up Gran Colombia
Gran Colombia
Gran Colombia is a name used today for the state that encompassed much of northern South America and part of southern Central America from 1819 to 1831. This short-lived republic included the territories of present-day Colombia, Venezuela, Ecuador, Panama, northern Peru and northwest Brazil. The...
.

The Port-au-Prince suburb of Pétionville
Pétionville
Pétion-Ville is a commune and a suburb of Port-au-Prince, Haiti, in the hills east and separate of the city itself on the northern hills of the Massif de la Selle. It was named after Alexandre Sabès Pétion , the Haitian general and president later recognized as one of the country's four founding...
was named for Pétion.