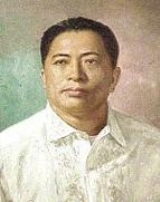 Encyclopedia
Alejo S. Santos was a Filipino
Filipino people
The Filipino people or Filipinos are an Austronesian ethnic group native to the islands of the Philippines. There are about 92 million Filipinos in the Philippines, and about 11 million living outside the Philippines ....
soldier and World War II
World War II
World War II, or the Second World War , was a global conflict lasting from 1939 to 1945, involving most of the world's nations—including all of the great powers—eventually forming two opposing military alliances: the Allies and the Axis...
hero
Hero
A hero , in Greek mythology and folklore, was originally a demigod, their cult being one of the most distinctive features of ancient Greek religion...
who parlayed his fame into a political career. His prestige was somewhat marred in later life when he agreed to run as the only candidate against Ferdinand Marcos
Ferdinand Marcos
Ferdinand Emmanuel Edralin Marcos, Sr. was a Filipino leader and an authoritarian President of the Philippines from 1965 to 1986. He was a lawyer, member of the Philippine House of Representatives and a member of the Philippine Senate...
in the widely-suspect 1981 Philippine presidential election.

Santos was born in Bustos, Bulacan
Bustos, Bulacan
Bustos is a 2nd class municipality in the province of Bulacan, Philippines. According to the latest census, it has a population of 60,681 inhabitants in 9,799 households.- Built up area :...
, the son of a farmer
Farmer
A farmer is a person engaged in agriculture, who raises living organisms for food or raw materials, generally including livestock husbandry and growing crops, such as produce and grain...
. He graduated from the University of the Philippines with an education course. He first served as Prison Guard with the Bureau of Prisons from 1933 to 1934. Santos married Juanita Garcia in 1934 and they had eight children: Reynaldo, Edgardo, Ravenal, Lamberto, Liberty, Daisy, Nenita and Alexis. At the outbreak of World War II, he was a captain of the USAFFE
U.S. Army Forces Far East
USAFFE included the Philippine Department, Philippine Army , and the Far East Air Force. USAFFE Headquarters was created on July 26, 1941, at No.1, Calle Victoria, Manila, Luzon, the Philippines, with Major General MacArthur as commander. The Chief of Staff was Lieutenant General Richard K...
. He was among the USAFFE soldiers who retreated to Bataan
Bataan
Bataan is a province of the Philippines occupying the whole of the Bataan Peninsula on Luzon. The province is part of the Central Luzon region. The capital of Bataan is Balanga City and it is bordered by the provinces of Zambales and Pampanga to the north...
to make the last stand against the invading Japanese Imperial Army
Imperial Japanese Army
-Foundation:During the Meiji Restoration, the military forces loyal to the Emperor were samurai drawn primarily from the loyalist feudal domains of Satsuma and Chōshū...
. However, he evaded capture by the Japanese when Bataan fell, escaping instead to his hometown. Santos then agreed to join the fledgling anti-Japanese guerrilla movement. He became one of the founders of the Bulacan Military Area, the main guerrilla movement in Bulacan
Bulacan
Bulacan , officially called the Province of Bulacan or simply Bulacan Province, is a first class province of the Republic of the Philippines located in the Central Luzon Region in the island of Luzon, north of Manila , and part of the Metro...
which had 23,000 men under its command. The BMA attracted many patriotic Filipinos chafing under Japanese rule, and was soon organized into eight divisions. For his World War II activities, Santos received numerous citations and awards from the Philippine and American governments. He was the only Filipino conferred the rank of brigadier general
Brigadier General
Brigadier general is a senior rank in the armed forces. It is the lowest ranking general officer in some countries, usually sitting between the ranks of colonel and major general. When appointed to a field command, a brigadier general is typically in command of a brigade consisting of around 4,000...
by the American government.

After the liberation of Bulacan by joint Filipino and American ground troops in 1945, Santos was named as its military governor. He was elected as to the House of Representatives
House of Representatives of the Philippines
The House of Representatives of the Philippines is the lower chamber of the...
in 1946, representing the 2nd District of Bulacan
Legislative districts of Bulacan
The Legislative Districts of Bulacan, namely the first, second, third and fourth districts, are the current representations of the province of Bulacan in the Philippine House of Representatives....
under the banner of the leftist Democratic Alliance
Democratic Alliance (Philippines)
The Democratic Alliance of the Philippines is made up of nationalist and progressive forces, primarily former members of the Partido Komunista ng Pilipinas. Most supported Sergio Osmeña and the Nacionalista Party against Manuel Roxas and the Liberal Party during the 1946 elections...
, but was almost immediately unseated together with several of his party-mates in a controversial maneuver believed to be related with the looming congressional vote on the approval of the Bell Trade Act
Bell Trade Act
The Bell Trade Act of 1946, also known as the Philippine Trade Act was an act passed by the United States Congress specifying the economic conditions governing the independence of the Philippines from the United States....
with the United States. Nonetheless, Santos was again elected to the House in 1949, and he served in the 2nd Congress
2nd Congress of the Philippines
The Second Congress of the Philippines was the meeting of the legislature of the Republic of the Philippines, composed of the Philippine Senate and House of Representatives from December 30, 1949 until December 8, 1953.-Sessions:**First Special Session: December 30, 1949 – January 5, 1950*First...
until his election as governor
Governor
A governor is a governing official, usually the executive of a non-sovereign level of government, ranking under the head of state...
of Bulacan in 1951. By then, Santos had affiliated with the Nacionalista Party. Santos would serve as governor until 1957, wherein 705 public works projects were constructed in Bulacan and the national government released Php 1.9 Million for these. From 1959 to 1961, Santos served as Secretary of National Defense
Department of National Defense (Philippines)
The Department of National Defense is the executive department of the Philippine government responsible for guarding against external and internal threats to peace and security in the country...
in the cabinet of President Carlos P. Garcia
Carlos P. Garcia
Carlos Polistico García was a Filipino teacher, poet, orator, lawyer, public official, political economist and guerrilla leader...
. In 1967 he was appointed by President Marcos
Marcos
-Sports:* Dayton Marcos, Negro League baseball team from Dayton, Ohio * Nélson Marcos, Portuguese footballer* Marcos Ambrose, Australian racing driver currently competing in NASCAR* Marcos Baghdatis, Cypriot tennis player...
to head the prison bureau, a post he held until 1971.

By 1981, Santos had mostly retired from political life, devoting his activity to veteran's affairs. It came as a surprise when he agreed to run for President against Ferdinand Marcos in the 1981 elections. The elections were called shortly after Marcos lifted the nine-year old declaration of martial law
Proclamation No. 1081
Proclamation No. 1081 was the declaration of martial law in the Philippines by President Ferdinand E. Marcos. Once in effect, it covered the entire republic on September 21, 1972...
while retaining authoritarian powers at the same time, and were seen as a means of maintaining the veneer of democracy, especially in the international community. However, the anti-Marcos political opposition, which felt it was cheated out of victory in the 1978 parliamentary elections, refused to participate in the presidential elections and successfully called for a boycott. Santos' candidacy, ostensibly under the banner of the then-moribund Nacionalista party, provided Marcos with at least one other candidate he could run against. Santos, as the sole opponent of Marcos, did not offer a vigorous campaign, and he was trounced in the election, garnering only 8% of the vote as against Marcos's 88%.