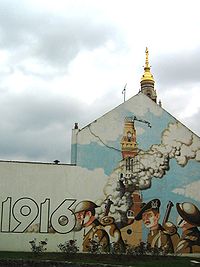 Albert is a commune
Communes of France
The commune is the lowest level of administrative division in the French Republic. French communes are roughly equivalent to incorporated municipalities or villages in the United States or Gemeinden in Germany...
in the Somme
Somme
Somme is a department of France, located in the north of the country and named after the Somme river. It is part of the Picardy region of France....
department in Picardie
Picardie
Picardy is one of the 27 regions of France. It is located in the northern part of France.-History:The historical province of Picardy stretched from north of Noyon to Calais, via the whole of the Somme department and the north of the Aisne department...
in northern France
France
The French Republic , The French Republic , The French Republic , (commonly known as France , is a unitary semi-presidential republic in Western Europe with several overseas territories and islands located on other continents and in the Indian, Pacific, and Atlantic oceans. Metropolitan France...
.

It is located about halfway between Amiens
Amiens
Amiens is a city and commune in northern France, north of Paris and south-west of Lille. It is the capital of the Somme department in Picardy...
and Bapaume
Bapaume
Bapaume is a commune and the seat of a canton in the Pas-de-Calais department in the Nord-Pas-de-Calais region of France.-Geography:A farming and light industrial town located 10 miles south of Arras at the junction of the A1 autoroute and the N17 and N30 national roads its location is...
.

During World War I, the statue of Mary and the infant Jesus - designed by sculptor Albert Roze and dubbed the "Golden Virgin" - on top of the Basilica of Notre-Dame de Brebières was hit by a shell on January 15, 1915, and was put on a horizontal position and was near falling. The Germans said that whoever made the statue fall would lose the war, and a number of legends surrounding the "Leaning Virgin" developed among German, French, and British soldiers. The Leaning Virgin became an especially familiar image to the thousands of British soldiers who fought at the Battle of the Somme (1916), many of whom passed through Albert, which was situated three miles from the front lines.

In his letters home to his wife, Rupert Edward Inglis (1863–1916), who was a former rugby international and now a Forces Chaplain, describes pasing through Albert:

We went through the place today (2 October 1915) where the Virgin Statue at the top of the Church was hit by a shell in January. The statue was knocked over, but has never fallen, I sent you a picture of it. It really is a wonderful sight. It is incomprehensible how it can have stayed there, but I think it is now lower than when the photograph was taken, and no doubt will come down with the next gale. The Church and village are wrecked, there’s a huge hole made by a Jack Johnson
Jack Johnson (boxer)
John Arthur Johnson , nicknamed the “Galveston Giant,” was an American boxer. At the height of the Jim Crow era, Johnson became the first African American world heavyweight boxing champion...
just outside the west door of the Church.

The German army recaptured the town in March 1918 during the Spring Offensive; the British, to prevent the Germans from using the church tower as an observation post, directed their bombardment against the basilica. The statue fell in April 1918 and was never recovered. In August 1918 the Germans were again forced to retreat, and the British reoccupied Albert until the end of the war.

Albert was completely reconstructed after the war, including widening and re-orienting the town's main streets. The Basilica, however, was faithfully rebuilt according to its original design by Eduoard Duthoit, the son of the architect who had overseen its construction in 1885-95. The present statue is an exact replica of Roze's original design, and a war memorial designed by Roze and featuring an image of the "Leaning Virgin" can be seen in the "Abri" (Shelter) Museum, which houses souvenirs of the war. The underground shelters in which the museum is located served as protective bunkers for Albert's residents during aerial bombardments in World War II
World War II
World War II, or the Second World War , was a global conflict lasting from 1939 to 1945, involving most of the world's nations—including all of the great powers—eventually forming two opposing military alliances: the Allies and the Axis...
.

Albert is twinned with the

British town of Ulverston
Ulverston
Ulverston is a market town and civil parish in the South Lakeland district of Cumbria in north-west England. Historically part of Lancashire, the town is located in the Furness area, close to the Lake District, and just north of Morecambe Bay....
in Cumbria
Cumbria
Cumbria , is a non-metropolitan county in North West England. The county and Cumbria County Council, its local authority, came into existence in 1974 after the passage of the Local Government Act 1972. Cumbria's largest settlement and county town is Carlisle. It consists of six districts, and in...
.

The two towns regularly meet to play football at Easter with the Cyril Barker Shield being contested every year. The two towns switch between each other's towns for the tournament.

Albert is also twinned with the

German towns of Aldenhoven
Aldenhoven
Aldenhoven is a municipality in the district of Düren in the state of North Rhine-Westphalia, Germany. It is located approx. 5 km south-west of Jülich, 5 km north of Eschweiler and 20 km north-east of Aachen.- Notable people :...
and Niesky
Niesky
Niesky is a small town in Upper Lusatia in eastern the Free State of Saxony, Germany. It has a population of about 11,000 and is part of the district of Görlitz....
.