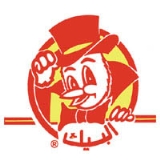 Encyclopedia
Al Baik is a chain of fast food
Fast food
Fast food is the term given to food that can be prepared and served very quickly. While any meal with low preparation time can be considered to be fast food, typically the term refers to food sold in a restaurant or store with preheated or precooked ingredients, and served to the customer in a...
restaurants in Saudi Arabia
Saudi Arabia
The Kingdom of Saudi Arabia , commonly known in British English as Saudi Arabia and in Arabic as as-Sa‘ūdiyyah , is the largest state in Western Asia by land area, constituting the bulk of the Arabian Peninsula, and the second-largest in the Arab World...
that primarily sells broasted chicken and shrimp with a variety of sauce. The chain has 31 branches in Jeddah
Jeddah
Jeddah, Jiddah, Jidda, or Jedda is a city located on the coast of the Red Sea and is the major urban center of western Saudi Arabia. It is the largest city in Makkah Province, the largest sea port on the Red Sea, and the second largest city in Saudi Arabia after the capital city, Riyadh. The...
, along with 6 in Mecca
Mecca
Mecca is a city in the Hijaz and the capital of Makkah province in Saudi Arabia. The city is located inland from Jeddah in a narrow valley at a height of above sea level...
, three in Medina
Medina
Medina , or ; also transliterated as Madinah, or madinat al-nabi "the city of the prophet") is a city in the Hejaz region of western Saudi Arabia, and serves as the capital of the Al Madinah Province. It is the second holiest city in Islam, and the burial place of the Islamic Prophet Muhammad, and...
, one in Taif and one in Yanbu.
Al Baik is a major consumer of chicken in Saudi Arabia. The Saudi government have stopped attempts for this very successful fast food chain to grow by limiting what regions of the country it can expand too.


It worth noting that Al Baik failed to expand because some Saudi princess have tried to partner forcibly with the original owners as a condition for expansion in the country of Saudi Arabia.

Al Baik's prices are lower than similar international fast food chains that it competes with, including McDonald's
McDonald's
McDonald's Corporation is the world's largest chain of hamburger fast food restaurants, serving around 64 million customers daily in 119 countries. Headquartered in the United States, the company began in 1940 as a barbecue restaurant operated by the eponymous Richard and Maurice McDonald; in 1948...
and KFC
KFC
KFC, founded and also known as Kentucky Fried Chicken, is a chain of fast food restaurants based in Louisville, Kentucky, in the United States. KFC has been a brand and operating segment, termed a concept of Yum! Brands since 1997 when that company was spun off from PepsiCo as Tricon Global...
. Al Baik's meals generally cost about 30 percent less than at the international chains.
The source of this article is wikipedia, the free encyclopedia.  The text of this article is licensed under the GFDL.