Encyclopedia
Ajaw is a political rulership title attested from the epigraphic
Epigraphy
Epigraphy Epigraphy Epigraphy (from the , literally "on-writing", is the study of inscriptions or epigraphs as writing; that is, the science of identifying the graphemes and of classifying their use as to cultural context and date, elucidating their meaning and assessing what conclusions can be...
inscriptions of the pre-Columbian
Pre-Columbian
The pre-Columbian era incorporates all period subdivisions in the history and prehistory of the Americas before the appearance of significant European influences on the American continents, spanning the time of the original settlement in the Upper Paleolithic period to European colonization during...
Maya civilization
Maya civilization
The Maya is a Mesoamerican civilization, noted for the only known fully developed written language of the pre-Columbian Americas, as well as for its art, architecture, and mathematical and astronomical systems. Initially established during the Pre-Classic period The Maya is a Mesoamerican...
, with a meaning variously interpreted as "lord", "ruler", "king" or "leader". It denoted any of the leading class of nobles in a particular polity and was not limited to a single individual. Since the ajaw performed religious activities, it also designated a member of the Maya priesthood
Maya priesthood
Until the discovery that Maya stelae depicted kings instead of high priests, the Maya priesthood and their preoccupations had been a main scholarly concern. In the course of the 1960s and over the following decades, however, dynastic research marginalized interest in the subject...
. The variant kuhul ajaw ("divine lord") indicates a sovereign leader of a polity, although the extent of the territory and influence controlled by an ajaw varied considerably, and could also be applied to persons who in theory recognised the overlordship of another person, dynasty or state. The title was also given to women, though generally prefixed with the sign Ix ("woman") to indicate their gender. 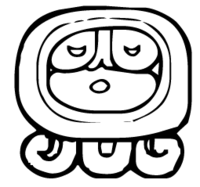 The word comes from the Mayan languages
Mayan languages
The Mayan languages form a language family spoken in Mesoamerica and northern Central America. Mayan languages are spoken by at least 6 million indigenous Maya, primarily in Guatemala, Mexico, Belize and Honduras...
, and is known from several of these languages in use at the time (such as in Classic Maya
Classic Maya language
The Classic Maya language is the oldest historically attested member of the Mayan language family. It is the main language documented in the pre-Columbian inscriptions of the Classic Era Maya civilization.- Relationships :...
), as well as in their contemporary descendant languages (in which there may be observed some slight variations). "Ajaw" is the modernised orthography
Orthography
The orthography of a language specifies a standardized way of using a specific writing system to write the language. Where more than one writing system is used for a language, for example Kurdish, Uyghur, Serbian or Inuktitut, there can be more than one orthography...
, as per the standard revision of Mayan orthography put forward in 1994 by the Guatemala
Guatemala
Guatemala is a country in Central America bordered by Mexico to the north and west, the Pacific Ocean to the southwest, Belize to the northeast, the Caribbean to the east, and Honduras and El Salvador to the southeast...
n Academia de Lenguas Mayas, and now widely adopted by Mayanist
Mayanist
A Mayanist is a scholar specialising in research and study of the Central American pre-Columbian Maya civilization. This discipline should not be confused with Mayanism, a collection of New Age beliefs about the ancient Maya....
scholars. Before this standardisation, it was more commonly written as "Ahau", following the orthography of 16th-century Yucatec Maya in Spanish transcriptions (now Yukatek in the modernised style).

In the Maya hieroglyphics writing system
Writing system
A writing system is a symbolic system used to represent elements or statements expressible in language.-General properties:Writing systems are distinguished from other possible symbolic communication systems in that the reader must usually understand something of the associated spoken language to...
, the representation of the word ajaw could be as either a logogram
Logogram
A logogram, or logograph, is a grapheme which represents a word or a morpheme . This stands in contrast to phonograms, which represent phonemes or combinations of phonemes, and determinatives, which mark semantic categories.Logograms are often commonly known also as "ideograms"...
, or spelled-out syllabically
Syllable
A syllable is a unit of organization for a sequence of speech sounds. For example, the word water is composed of two syllables: wa and ter. A syllable is typically made up of a syllable nucleus with optional initial and final margins .Syllables are often considered the phonological "building...
. In either case quite a few glyph
Glyph
A glyph is an element of writing: an individual mark on a written medium that contributes to the meaning of what is written. A glyph is made up of one or more graphemes....
ic variants are known.

"Ajaw" is also the name of the 20th named-day in the tzolk'in portion of the Maya calendar
Maya calendar
The Maya calendar is a system of calendars and almanacs used in the Maya civilization of pre-Columbian Mesoamerica, and in many modern Maya communities in highland Guatemala. and in Chiapas....
.