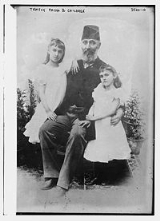 Encyclopedia
Ahmed Tevfik Pasha (11 February 1845 – 8 October 1936) was the last Ottoman
Ottoman Empire
The Ottoman EmpireIt was usually referred to as the "Ottoman Empire", the "Turkish Empire", the "Ottoman Caliphate" or more commonly "Turkey" by its contemporaries...
grand vizier
Grand Vizier
Grand Vizier, in Turkish Vezir-i Azam or Sadr-ı Azam , deriving from the Arabic word vizier , was the greatest minister of the Sultan, with absolute power of attorney and, in principle, dismissable only by the Sultan himself...
.

Ahmed Tevfik Pasha held office four times, from 13 April 1909 to 5 May 1909 under Abdulhamid II, and then under Mehmed V
Mehmed V
Mehmed V Reshad was the 35th Ottoman Sultan. He was the son of Sultan Abdülmecid I. He was succeeded by his half-brother Mehmed VI.-Birth:...
Reşad. His two other terms of office were 11 November 1918 - 3 March 1919, and 21 October 1920 - 4 November 1922, under Damat Ferid Pasha
Damat Ferid Pasha
Damad Ferid Pasha was an Ottoman statesman who held the office of grand vizier during two periods under the reign of the last Ottoman sultan Mehmed VI Vahdeddin, the first time between 4 March 1919 and 2 October 1919 and the second time between 5 April 1920 and 21 October 1920...
.

He died on October 8, 1936 in Istanbul
Istanbul
Istanbul , historically known as Byzantium and Constantinople , is the largest city of Turkey. Istanbul metropolitan province had 13.26 million people living in it as of December, 2010, which is 18% of Turkey's population and the 3rd largest metropolitan area in Europe after London and...
, and was interred at the Edirnekapı Martyr's Cemetery
Edirnekapi Martyr's Cemetery
The Edirnekapı Martyr's Cemetery is a burial ground located in the European part of Istanbul, Turkey. It consists of an old, historical part and a modern one....
.
The source of this article is wikipedia, the free encyclopedia.  The text of this article is licensed under the GFDL.