Encyclopedia
The AgustaWestland AW139 is a 15-seat medium sized twin-engined helicopter
Helicopter
A helicopter is a type of rotorcraft in which lift and thrust are supplied by one or more engine-driven rotors. This allows the helicopter to take off and land vertically, to hover, and to fly forwards, backwards, and laterally...
manufactured by AgustaWestland
AgustaWestland
AgustaWestland is an Anglo-Italian helicopter design and manufacturing company. It was formed in July 2000 when Finmeccanica S.p.A. and GKN plc agreed to merge their respective helicopter subsidiaries to form AgustaWestland with Finmeccanica and GKN each holding a 50% share.AgustaWestland is now a...
. Originally designed and developed jointly by Agusta and Bell Helicopters
Bell Helicopter Textron
Bell Helicopter is an American rotorcraft manufacturer headquartered in Hurst, Texas, near Fort Worth. A division of Textron, Bell manufactures military helicopter and tiltrotor products in and around Fort Worth, as well as in Amarillo, Texas, and commercial rotorcraft products in Mirabel, Quebec,...
and marketed as the Agusta-Bell AB139, it was redesignated the AW139 when Bell withdrew from the project. The AW149
AgustaWestland AW149
-See also:-External links:* * * * * * *...
is a medium-lift military helicopter being developed as an enlarged version of the AW139.

In 1997, the Italian helicopter manufacturer Agusta
Agusta
Agusta is an Italian helicopter manufacturer. It is based in Samarate, Northern Italy. It is a subsidiary of Finmeccanica. The company was founded by Count Giovanni Agusta in 1923, who flew his first airplane in 1907...
launched a programme to develop a replacement for the Bell Huey family of helicopters, which had been built in very large numbers both by Bell and Agusta, with a potential market of 900 aircraft being predicted. In 1998, Bell and Agusta entered into an agreement, setting up a joint venture, Bell/Agusta Aerospace Company (BAAC) to develop both the Italian helicopter and a tiltrotor
Tiltrotor
A tiltrotor is an aircraft which uses a pair or more of powered rotors mounted on rotating shafts or nacelles at the end of a fixed wing for lift and propulsion, and combines the vertical lift capability of a helicopter with the speed and range of a conventional fixed-wing aircraft...
aircraft, which became the Bell/Agusta AB139 and Bell/Agusta BA609 respectively.

The AB139 is a conventional layout twin-engined transport helicopter. It has a five-bladed fully articulated main rotor with a titanium
Titanium
Titanium is a chemical element with the symbol Ti and atomic number 22. It has a low density and is a strong, lustrous, corrosion-resistant transition metal with a silver color....
hub and composite blades and a four-bladed tail rotor. It is fitted with a retractable tricycle landing gear. It is flown by a crew of two pilots, with up to 15 passengers accommodated in three rows of five. It is powered by two Pratt & Whitney PT6C turboshaft engines.

The helicopter is being marketed for use in a number of roles including Law Enforcement/Emergency Medical Service, Executive Transport, Search and Rescue, Maritime and Offshore Oil Operations.

The company has orders for over 430 helicopters of which over 200 had been delivered by January 2009. It was a contender in the U.S. Army Light Utility Helicopter Program (2004–2006), but lost to the Eurocopter EC145-based UH-72A Lakota.

In 2007 a second production line at the AgustaWestland Aerospace plant in Philadelphia, United States
United States
The United States of America is a federal constitutional republic comprising fifty states and a federal district...
was established.

In late 2006 it was announced that the Japan Coast Guard
Japan Coast Guard
The , formerly the Maritime Safety Agency, is the Japanese coast guard. Comprising about 12,000 personnel, it is under the oversight of the Ministry of Land, Infrastructure, Transport and Tourism, and is responsible for the protection the coast-lines of Japan...
had selected the AW139 as the replacement for its fleet of Bell 212 helicopters. Twenty-four AW139s are expected to be delivered, beginning in 2008.

Designation change from 55th aircraft onwards, built in Italy and the United States.

Long nose variant with increased room for avionics built in both Italy and the United States. 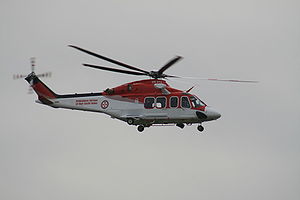