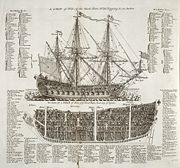 The Age of Sail was the period in which international trade
International trade
International trade is the exchange of capital, goods, and services across international borders or territories. In most countries, such trade represents a significant share of gross domestic product...
and naval warfare
Naval warfare
Naval warfare is combat in and on seas, oceans, or any other major bodies of water such as large lakes and wide rivers.-History:Mankind has fought battles on the sea for more than 3,000 years. Land warfare would seem, initially, to be irrelevant and entirely removed from warfare on the open ocean,...
were dominated by sail
Sail
A sail is any type of surface intended to move a vessel, vehicle or rotor by being placed in a wind—in essence a propulsion wing. Sails are used in sailing.-History of sails:...
ing ship
Ship
Since the end of the age of sail a ship has been any large buoyant marine vessel. Ships are generally distinguished from boats based on size and cargo or passenger capacity. Ships are used on lakes, seas, and rivers for a variety of activities, such as the transport of people or goods, fishing,...
s, lasting from the 16th to the mid 19th century. This is a significant period during which square-rigged sailing ships carried European settlers
History of colonialism
The historical phenomenon of colonisation is one that stretches around the globe and across time, including such disparate peoples as the Hittites, the Incas and the British. European colonialism, or imperialism, began in the 15th century with the "Age of Discovery", led by Portuguese and Spanish...
to many parts of the world in one of the most expansive human migration
Human migration
Human migration is physical movement by humans from one area to another, sometimes over long distances or in large groups. Historically this movement was nomadic, often causing significant conflict with the indigenous population and their displacement or cultural assimilation. Only a few nomadic...
s in recorded history.

Like most periodic eras
History by period
Whether one can precisely define a time window as 'High Middle Ages' or 'Early Middle Ages' the title evokes an image and expectations in the reader of certain sets of characteristics—the essential essence of such labeling—a communications tool from one mind to another.Nonetheless, periods have a...
the definition is inexact but close enough to serve as a general description. The age of sail runs roughly from the Battle of Lepanto
Battle of Lepanto (1571)
The Battle of Lepanto took place on 7 October 1571 when a fleet of the Holy League, a coalition of Catholic maritime states, decisively defeated the main fleet of the Ottoman Empire in five hours of fighting on the northern edge of the Gulf of Patras, off western Greece...
in 1571, the last significant engagement in which oar
Oar
An oar is an implement used for water-borne propulsion. Oars have a flat blade at one end. Oarsmen grasp the oar at the other end. The difference between oars and paddles are that paddles are held by the paddler, and are not connected with the vessel. Oars generally are connected to the vessel by...
-propelled galleys played a major role, to the Battle of Hampton Roads
Battle of Hampton Roads
The Battle of Hampton Roads, often referred to as either the Battle of the Monitor and Merrimack or the Battle of Ironclads, was the most noted and arguably most important naval battle of the American Civil War from the standpoint of the development of navies...
in 1862, in which the steam-powered ironclad CSS Virginia
CSS Virginia
CSS Virginia was the first steam-powered ironclad warship of the Confederate States Navy, built during the first year of the American Civil War; she was constructed as a casemate ironclad using the raised and cut down original lower hull and steam engines of the scuttled . Virginia was one of the...
destroyed the sailing ships USS Cumberland
USS Cumberland (1842)
The first USS Cumberland was a 50-gun sailing frigate of the United States Navy. She was the first ship sunk by the ironclad CSS Virginia....
and USS Congress
USS Congress (1841)
USS Congress — the fourth United States Navy ship to carry that name — was a sailing frigate, like her predecessor, .Congress served with distinction in the Mediterranean, South Atlantic Ocean, and in the Pacific Ocean...
, finally culminating with the advance of steam power, rendering sail power in warfare obsolete.

Sailing ships continued to be an economical way to transport cargo on long voyages into the 1920s. Sailing ships do not require fuel or complex engines to be powered; thus they tended to be more independent from requiring a dedicated support base on the mainland. Crucially though, steam powered ships held a speed advantage and were rarely hindered by adverse winds, freeing steam-powered vessels from the necessity of following trade wind
Trade wind
The trade winds are the prevailing pattern of easterly surface winds found in the tropics, within the lower portion of the Earth's atmosphere, in the lower section of the troposphere near the Earth's equator...
s. As a result, cargo and supplies could reach a foreign port in half the time it took a sailing ship. It is this factor that drove sailing ships aside. Sailing vessels were pushed into narrower and narrower economic niches (see disruptive technology
Disruptive technology
A disruptive technology or disruptive innovation is an innovation that helps create a new market and value network, and eventually goes on to disrupt an existing market and value network , displacing an earlier technology there...
) and gradually disappeared from commercial trade. Today, sailing vessels are only economically viable for small scale coastal fishing, along with recreational uses such as yachting
Yachting
Yachting refers to recreational sailing or boating, the specific act of sailing or using other water vessels for sporting purposes.-Competitive sailing:...
and passenger sail excursion ships.

In Europe
Europe
Europe is, by convention, one of the world's seven continents. Comprising the westernmost peninsula of Eurasia, Europe is generally 'divided' from Asia to its east by the watershed divides of the Ural and Caucasus Mountains, the Ural River, the Caspian and Black Seas, and the waterways connecting...
, the Golden Age of Sail is generally agreed to be the period in the 19th century when the efficiency and usage of commercial sailing vessels was at its peak (clipper
Clipper
A clipper was a very fast sailing ship of the 19th century that had three or more masts and a square rig. They were generally narrow for their length, could carry limited bulk freight, small by later 19th century standards, and had a large total sail area...
s, tall ship
Tall ship
A tall ship is a large, traditionally-rigged sailing vessel. Popular modern tall ship rigs include topsail schooners, brigantines, brigs and barques. "Tall Ship" can also be defined more specifically by an organization, such as for a race or festival....
s, etc.) and immediately before steamboat
Steamboat
A steamboat or steamship, sometimes called a steamer, is a ship in which the primary method of propulsion is steam power, typically driving propellers or paddlewheels...
s started to take trade away from sail. Some would say that the Golden Age of Sail relates specifically to the clipper ship era. while others put the Golden Age of Sail between 1850 and the early 1900s when sailing vessels reached their peak of size and complexity. "The Golden Age" is also a term used to describe the "Golden Age of Piracy", the time period from 1690 to 1725 when well-known pirates such as Edward Teach (Blackbeard
Blackbeard
Edward Teach , better known as Blackbeard, was a notorious English pirate who operated around the West Indies and the eastern coast of the American colonies....
) and Bartholomew Roberts
Bartholomew Roberts
Bartholomew Roberts , born John Roberts, was a Welsh pirate who raided ships off America and West Africa between 1719 and 1722. He was the most successful pirate of the Golden Age of Piracy. He is estimated to have captured over 470 vessels...
were preying on mercantile ships, and sometimes even blockading ports, on both sides of the Atlantic.