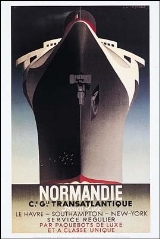 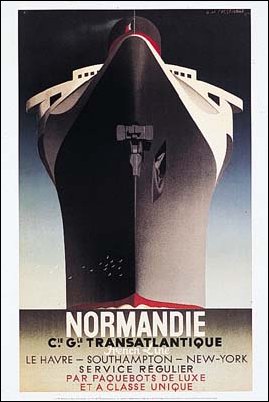 Adolphe Mouron Cassandre (24 January 1901 – 17 June 1968) was a Ukrainian
Ukraine
Ukraine is a country in Eastern Europe. It has an area of 603,628 km², making it the second largest contiguous country on the European continent, after Russia...
-French
France
The French Republic , The French Republic , The French Republic , (commonly known as France , is a unitary semi-presidential republic in Western Europe with several overseas territories and islands located on other continents and in the Indian, Pacific, and Atlantic oceans. Metropolitan France...
painter
Painting
Painting is the practice of applying paint, pigment, color or other medium to a surface . The application of the medium is commonly applied to the base with a brush but other objects can be used. In art, the term painting describes both the act and the result of the action. However, painting is...
, commercial poster
Poster
A poster is any piece of printed paper designed to be attached to a wall or vertical surface. Typically posters include both textual and graphic elements, although a poster may be either wholly graphical or wholly text. Posters are designed to be both eye-catching and informative. Posters may be...
artist, and typeface
Typeface
In typography, a typeface is the artistic representation or interpretation of characters; it is the way the type looks. Each type is designed and there are thousands of different typefaces in existence, with new ones being developed constantly....
designer.

He was born Adolphe Jean-Marie Mouron in Kharkov, Ukraine
Ukraine
Ukraine is a country in Eastern Europe. It has an area of 603,628 km², making it the second largest contiguous country on the European continent, after Russia...
, to French
France
The French Republic , The French Republic , The French Republic , (commonly known as France , is a unitary semi-presidential republic in Western Europe with several overseas territories and islands located on other continents and in the Indian, Pacific, and Atlantic oceans. Metropolitan France...
parents. As a young man, Cassandre moved to Paris
Paris
Paris is the capital and largest city in France, situated on the river Seine, in northern France, at the heart of the Île-de-France region...
, where he studied at the École des Beaux-Arts
École des Beaux-Arts
École des Beaux-Arts refers to a number of influential art schools in France. The most famous is the École nationale supérieure des Beaux-Arts, now located on the left bank in Paris, across the Seine from the Louvre, in the 6th arrondissement. The school has a history spanning more than 350 years,...
and at the Académie Julian
Académie Julian
The Académie Julian was an art school in Paris, France.Rodolphe Julian established the Académie Julian in 1868 at the Passage des Panoramas, as a private studio school for art students. The Académie Julian not only prepared students to the exams at the prestigious École des Beaux-Arts, but offered...
. The popularity of poster
Poster
A poster is any piece of printed paper designed to be attached to a wall or vertical surface. Typically posters include both textual and graphic elements, although a poster may be either wholly graphical or wholly text. Posters are designed to be both eye-catching and informative. Posters may be...
s as advertising afforded him an opportunity to work for a Parisian printing house. Inspired by cubism
Cubism
Cubism was a 20th century avant-garde art movement, pioneered by Pablo Picasso and Georges Braque, that revolutionized European painting and sculpture, and inspired related movements in music, literature and architecture...
as well as surrealism
Surrealism
Surrealism is a cultural movement that began in the early 1920s, and is best known for the visual artworks and writings of the group members....
, he earned a reputation with works such as Bûcheron (Woodcutter), a poster created for a cabinetmaker that won first prize at the 1925 Exposition Internationale des Arts Décoratifs et Industriels Modernes
Exposition Internationale des Arts Décoratifs et Industriels Modernes
The International Exposition of Modern Industrial and Decorative Arts was a World's fair held in Paris, France, from April to October 1925. The term "Art Deco" was derived by shortening the words Arts Décoratifs, in the title of this exposition, but not until the late 1960s by British art critic...
.

Cassandre became successful enough that with the help of partners he was able to set up his own advertising agency called Alliance Graphique, serving a wide variety of clients during the 1930s. He is perhaps best known for his posters advertising travel, for clients such as the Compagnie Internationale des Wagons-Lits.
His creations for the Dubonnet wine company were among the first posters designed in a manner that allowed them to be seen by occupants in moving vehicles. His posters are memorable for their innovative graphic solutions and their frequent denotations to such painters as Max Ernst
Max Ernst
Max Ernst was a German painter, sculptor, graphic artist, and poet. A prolific artist, Ernst was one of the primary pioneers of the Dada movement and Surrealism.-Early life:...
and Pablo Picasso
Pablo Picasso
Pablo Diego José Francisco de Paula Juan Nepomuceno María de los Remedios Cipriano de la Santísima Trinidad Ruiz y Picasso known as Pablo Ruiz Picasso was a Spanish expatriate painter, sculptor, printmaker, ceramicist, and stage designer, one of the greatest and most influential artists of the...
. In addition, he taught graphic design
Graphic design
Graphic design is a creative process – most often involving a client and a designer and usually completed in conjunction with producers of form – undertaken in order to convey a specific message to a targeted audience...
at the École des Arts Décoratifs and then at the École d'Art Graphique.

With typography an important part of poster design, the company created several new typeface styles. Cassandre developed Bifur in 1929, the sans serif Acier Noir in 1935, and in 1937 an all-purpose font called Peignot
Peignot
Peignot is constructed sans-serif display typeface, designed by A. M. Cassandre in 1937. It was commissioned by the French foundry Deberny & Peignot. The typeface is notable for not having a traditional lowercase, but in its place a "multi-case" combining traditional lowercase and small capital...
. In 1936, his works were exhibited at the Museum of Modern Art
Museum of Modern Art
The Museum of Modern Art is an art museum in Midtown Manhattan in New York City, on 53rd Street, between Fifth and Sixth Avenues. It has been important in developing and collecting modernist art, and is often identified as the most influential museum of modern art in the world...
in New York City
New York City
New York is the most populous city in the United States and the center of the New York Metropolitan Area, one of the most populous metropolitan areas in the world. New York exerts a significant impact upon global commerce, finance, media, art, fashion, research, technology, education, and...
which led to commissions from Harper's Bazaar
Harper's Bazaar
Harper’s Bazaar is an American fashion magazine, first published in 1867. Harper’s Bazaar is published by Hearst and, as a magazine, considers itself to be the style resource for “women who are the first to buy the best, from casual to couture.”...
to do cover designs.

With the onset of World War II
World War II
World War II, or the Second World War , was a global conflict lasting from 1939 to 1945, involving most of the world's nations—including all of the great powers—eventually forming two opposing military alliances: the Allies and the Axis...
, Cassandre served in the French army
French Army
The French Army, officially the Armée de Terre , is the land-based and largest component of the French Armed Forces.As of 2010, the army employs 123,100 regulars, 18,350 part-time reservists and 7,700 Legionnaires. All soldiers are professionals, following the suspension of conscription, voted in...
until the fall of France. His business long gone, he survived by creating stage sets and costumes for the theatre, something he had dabbled in during the 1930s. After the war, he continued this line of work while also returning to easel painting. In 1963, he designed the well-known Yves Saint-Laurent logo.

In his later years, Adolphe Mouron Cassandre suffered from bouts of depression
Depression (mood)
Depression is a state of low mood and aversion to activity that can affect a person's thoughts, behaviour, feelings and physical well-being. Depressed people may feel sad, anxious, empty, hopeless, helpless, worthless, guilty, irritable, or restless...
prior to his suicide
Suicide
Suicide is the act of intentionally causing one's own death. Suicide is often committed out of despair or attributed to some underlying mental disorder, such as depression, bipolar disorder, schizophrenia, alcoholism, or drug abuse...
in Paris in 1968.

In 1985, Henri Mouron told his father's life story in a book titled A.M. Cassandre. The book, published in English by Rizzoli, is currently out of print.