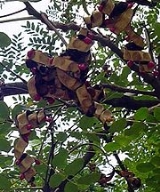 Adenanthera pavonina is a species of tree, used for its timber, also known as Barbados pride, Coral-wood, Coralwood, Peacock flower fence, Red beadtree, Red sandalwood tree, Red sandalwood, Sandalwood tree, Saga; syn. Adenanthera gersenii Scheff., Adenanthera polita Miq., Corallaria parvifolia Rumph. The tree is common within the tropics of the old world. In India
India
India , officially the Republic of India , is a country in South Asia. It is the seventh-largest country by geographical area, the second-most populous country with over 1.2 billion people, and the most populous democracy in the world...
, each language has its own name for the tree (for example in Kerala
Kerala
or Keralam is an Indian state located on the Malabar coast of south-west India. It was created on 1 November 1956 by the States Reorganisation Act by combining various Malayalam speaking regions....
it is known as Manchadi). It is also introduced in the following countries of the Americas: Brazil
Brazil
Brazil , officially the Federative Republic of Brazil , is the largest country in South America. It is the world's fifth largest country, both by geographical area and by population with over 192 million people...
, especially in Caatinga
Caatinga
Caatinga is a type of vegetation, and an ecoregion characterized by this vegetation in the northeastern part of Brazil. The name "Caatinga" is a Tupi word meaning "white forest" or "white vegetation"...
vegetation
Vegetation
Vegetation is a general term for the plant life of a region; it refers to the ground cover provided by plants. It is a general term, without specific reference to particular taxa, life forms, structure, spatial extent, or any other specific botanical or geographic characteristics. It is broader...
; Costa Rica
Costa Rica
Costa Rica , officially the Republic of Costa Rica is a multilingual, multiethnic and multicultural country in Central America, bordered by Nicaragua to the north, Panama to the southeast, the Pacific Ocean to the west and the Caribbean Sea to the east....
, Honduras
Honduras
Honduras is a republic in Central America. It was previously known as Spanish Honduras to differentiate it from British Honduras, which became the modern-day state of Belize...
, Cuba
Cuba
The Republic of Cuba is an island nation in the Caribbean. The nation of Cuba consists of the main island of Cuba, the Isla de la Juventud, and several archipelagos. Havana is the largest city in Cuba and the country's capital. Santiago de Cuba is the second largest city...
, Jamaica
Jamaica
Jamaica is an island nation of the Greater Antilles, in length, up to in width and 10,990 square kilometres in area. It is situated in the Caribbean Sea, about south of Cuba, and west of Hispaniola, the island harbouring the nation-states Haiti and the Dominican Republic...
, Puerto Rico
Puerto Rico
Puerto Rico , officially the Commonwealth of Puerto Rico , is an unincorporated territory of the United States, located in the northeastern Caribbean, east of the Dominican Republic and west of both the United States Virgin Islands and the British Virgin Islands.Puerto Rico comprises an...
, Trinidad
Trinidad
Trinidad is the larger and more populous of the two major islands and numerous landforms which make up the island nation of Trinidad and Tobago. It is the southernmost island in the Caribbean and lies just off the northeastern coast of Venezuela. With an area of it is also the fifth largest in...
, Tobago
Tobago
Tobago is the smaller of the two main islands that make up the Republic of Trinidad and Tobago. It is located in the southern Caribbean, northeast of the island of Trinidad and southeast of Grenada. The island lies outside the hurricane belt...
, Venezuela
Venezuela
Venezuela , officially called the Bolivarian Republic of Venezuela , is a tropical country on the northern coast of South America. It borders Colombia to the west, Guyana to the east, and Brazil to the south...
, and the United States
United States
The United States of America is a federal constitutional republic comprising fifty states and a federal district...
, specially in southern Florida
Florida
Florida is a state in the southeastern United States, located on the nation's Atlantic and Gulf coasts. It is bordered to the west by the Gulf of Mexico, to the north by Alabama and Georgia and to the east by the Atlantic Ocean. With a population of 18,801,310 as measured by the 2010 census, it...
.

Several alkaloid
Alkaloid
Alkaloids are a group of naturally occurring chemical compounds that contain mostly basic nitrogen atoms. This group also includes some related compounds with neutral and even weakly acidic properties. Also some synthetic compounds of similar structure are attributed to alkaloids...
s have been isolated from Adenanthera pavonina including pilocarpine
Pilocarpine
Pilocarpine is a parasympathomimetic alkaloid obtained from the leaves of tropical American shrubs from the genus Pilocarpus. It is a non-selective muscarinic receptor agonist in the parasympathetic nervous system, which acts therapeutically at the muscarinic acetylcholine receptor M3 due to its...
, pilocarpidine and physostigmine
Physostigmine
Physostigmine is a parasympathomimetic alkaloid, specifically, a reversible cholinesterase inhibitor. It occurs naturally in the Calabar bean....
.

This tree is useful for nitrogen fixation, and it is often cultivated for forage
Fodder
Fodder or animal feed is any agricultural foodstuff used specifically to feed domesticated livestock such as cattle, goats, sheep, horses, chickens and pigs. Most animal feed is from plants but some is of animal origin...
, as a medicinal plant, and as an ornamental garden plant and urban tree. The beauty of the seeds, their use as beads and for necklace, and their nourishing qualities (the raw seeds are toxic but can be eaten when cooked), have combined to scatter the plant. E. J. H. Corner
E. J. H. Corner
Edred John Henry Corner FRS was a botanist who occupied the posts of assistant director at the Singapore Botanic Gardens and Professor of Tropical Botany at the University of Cambridge...
states that in India, the seeds have been used as far back as history records as units of weight for fine measures, of gold for instance. The Malay name for the tree, saga, has been traced to the Arabic for 'goldsmith'.

The small, yellowish flower grows in dense drooping rat-tail flower heads, almost like catkins. The curved hanging pods, with a bulge opposite each seed, split open each into two twisted halves to reveal the hard, scarlet seeds. The young leaves can be cooked and eaten. The wood, which is extremely hard, is used in boat-building, making furniture and for firewood.

This tree is used for making soap, and a red dye can be obtained from the wood.

High doses of the seed extract show an anti-inflammatory effect in studies in rats and mice.