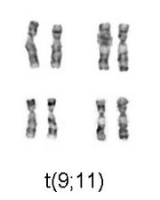 Overview
Acute myeloid leukemia also known as acute myelogenous leukemia, is a cancer
Cancer
Cancer , known medically as a malignant neoplasm, is a large group of different diseases, all involving unregulated cell growth. In cancer, cells divide and grow uncontrollably, forming malignant tumors, and invade nearby parts of the body. The cancer may also spread to more distant parts of the...
of the myeloid
Myeloid
The term myeloid suggests an origin in the bone marrow or spinal cord, or a resemblance to the marrow or spinal cord.In hematopoiesis, the term "myeloid cell" is used to describe any leukocyte that is not a lymphocyte...
line of blood cells, characterized by the rapid growth of abnormal white blood cell
White blood cell
White blood cells, or leukocytes , are cells of the immune system involved in defending the body against both infectious disease and foreign materials. Five different and diverse types of leukocytes exist, but they are all produced and derived from a multipotent cell in the bone marrow known as a...
s that accumulate in the bone marrow
Bone marrow
Bone marrow is the flexible tissue found in the interior of bones. In humans, bone marrow in large bones produces new blood cells. On average, bone marrow constitutes 4% of the total body mass of humans; in adults weighing 65 kg , bone marrow accounts for approximately 2.6 kg...
and interfere with the production of normal blood cells
Haematopoiesis
Haematopoiesis is the formation of blood cellular components. All cellular blood components are derived from haematopoietic stem cells...
. AML is the most common acute leukemia
Acute leukemia
Acute leukemia or acute leukaemia is a generic term used to describe a family of serious medical conditions relating to an original diagnosis of leukemia...
affecting adults, and its incidence
Incidence (epidemiology)
Incidence is a measure of the risk of developing some new condition within a specified period of time. Although sometimes loosely expressed simply as the number of new cases during some time period, it is better expressed as a proportion or a rate with a denominator.Incidence proportion is the...
increases with age. Although AML is a relatively rare disease
Rare disease
A rare disease, also referred to as an orphan disease, is any disease that affects a small percentage of the population.Most rare diseases are genetic, and thus are present throughout the person's entire life, even if symptoms do not immediately appear...
, accounting for approximately 1.2% of cancer deaths in the United States, its incidence is expected to increase as the population ages.

The symptoms of AML are caused by replacement of normal bone marrow with leukemic cells, which causes a drop in red blood cell
Red blood cell
Red blood cells are the most common type of blood cell and the vertebrate organism's principal means of delivering oxygen to the body tissues via the blood flow through the circulatory system...
s, platelet
Platelet
Platelets, or thrombocytes , are small,irregularly shaped clear cell fragments , 2–3 µm in diameter, which are derived from fragmentation of precursor megakaryocytes.  The average lifespan of a platelet is normally just 5 to 9 days...
s, and normal white blood cells.

Hi, Just wanted to ask is this condition contagious to others in the household? Thank you
More
x