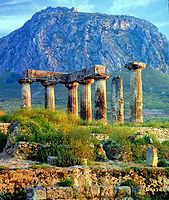 Afterwards it became a fortress of the Frankish
Frangokratia
The Frankokratia or Frangokratia , also known as Latinokratia is the period in Greek history after the Fourth Crusade , when a number of Western European Crusader states were established in Greece, on the territory of the dissolved Byzantine Empire .The term derives from the fact that Orthodox...
Principality of Achaea
Principality of Achaea
The Principality of Achaea or of the Morea was one of the three vassal states of the Latin Empire which replaced the Byzantine Empire after the capture of Constantinople during the Fourth Crusade. It became a vassal of the Kingdom of Thessalonica, along with the Duchy of Athens, until Thessalonica...
, the Venetians and the Ottoman Turks. With its secure water supply, Acrocorinth's fortress was used as the last line of defense in southern Greece because it commanded the Isthmus of Corinth
Isthmus of Corinth
The Isthmus of Corinth is the narrow land bridge which connects the Peloponnese peninsula with the rest of the mainland of Greece, near the city of Corinth. The word "isthmus" comes from the Ancient Greek word for "neck" and refers to the narrowness of the land. The Isthmus was known in the ancient...
, repelling foes from entry into the Peloponnese peninsula. Three circuit walls
Defensive wall
A defensive wall is a fortification used to protect a city or settlement from potential aggressors. In ancient to modern times, they were used to enclose settlements...
formed the man-made defense of the hill. The highest peak on the site was home to a temple
Temple
A temple is a structure reserved for religious or spiritual activities, such as prayer and sacrifice, or analogous rites. A templum constituted a sacred precinct as defined by a priest, or augur. It has the same root as the word "template," a plan in preparation of the building that was marked out...
to Aphrodite
Aphrodite
Aphrodite is the Greek goddess of love, beauty, pleasure, and procreation.Her Roman equivalent is the goddess .Historically, her cult in Greece was imported from, or influenced by, the cult of Astarte in Phoenicia....
which was converted to a church, and then became a mosque
Mosque
A mosque is a place of worship for followers of Islam. The word is likely to have entered the English language through French , from Portuguese , from Spanish , and from Berber , ultimately originating in — . The Arabic word masjid literally means a place of prostration...
. The American School's
American School of Classical Studies at Athens
The American School of Classical Studies at Athens is one of 17 foreign archaeological institutes in Athens, Greece.-General information:...
Corinth Excavations
Corinth Excavations
The Corinth Excavations by the American School of Classical Studies at Athens began in 1896 and have continued with little interruption until today. Restricted by the modern village of Ancient Corinth, which directly overlies the ancient city, the main focus of School investigations has been on the...
began excavations on it in 1929. Currently, Acrocorinth is one of the most important medieval castle sites of Greece
Greece
Greece , officially the Hellenic Republic , and historically Hellas or the Republic of Greece in English, is a country in southeastern Europe....
.

The Upper Pirene spring is located within the encircling walls. "The spring, which is behind the temple, they say was the gift of Asopus
Asopus
Asopus or Asôpos is the name of four different rivers in Greece and one in Turkey. In Greek mythology, it was the name of the gods of those rivers.-The rivers in Greece:...
to Sisyphus
Sisyphus
In Greek mythology Sisyphus was a king punished by being compelled to roll an immense boulder up a hill, only to watch it roll back down, and to repeat this throughout eternity...
. The latter knew, so runs the legend, that Zeus had ravished Aegina
Aegina
Aegina is one of the Saronic Islands of Greece in the Saronic Gulf, from Athens. Tradition derives the name from Aegina, the mother of Aeacus, who was born in and ruled the island. During ancient times, Aegina was a rival to Athens, the great sea power of the era.-Municipality:The municipality...
, the daughter of Asopus, but refused to give information to the seeker before he had a spring given him on the Acrocorinthus."