Encyclopedia
The Academy of Athens is Greece
Greece
Greece , officially the Hellenic Republic , and historically Hellas or the Republic of Greece in English, is a country in southeastern Europe....
's national academy
National academy
A national academy is an organizational body, usually operating with state financial support and approval, that co-ordinates scholarly research activities and standards for academic disciplines, most frequently in the sciences but also the humanities. Typically the country's learned societies in...
, and the highest research establishment in the country. It was established in 1926, and operates under the supervision of the Ministry of Education. The Academy's main building is one of the major landmarks of Athens.

The organization of the Academy of Athens, whose title hearkens back to the ancient Academy of Plato, was first established on 18 March 1926, and its charter was ratified by the law 4398/1929. This charter, with subsequent amendments, is still valid and governs the Academy's affairs. According to it, the Academy is divided into three Orders: Natural Sciences, Letters and Arts, Moral and Political Sciences.

The Academy today, maintains 12 research centres, 10 research offices and the "Ioannis Sykoutris" central library. In 2002, the Foundation for Biomedical Research of the Academy of Athens was established. The Hellenic Institute for Byzantine and Post-Byzantine Studies in Venice
Venice
Venice is a city in northern Italy which is renowned for the beauty of its setting, its architecture and its artworks. It is the capital of the Veneto region...
also functions under the supervision of the Academy.

The main building of the Academy is a neoclassical
Neoclassical architecture
Neoclassical architecture was an architectural style produced by the neoclassical movement that began in the mid-18th century, manifested both in its details as a reaction against the Rococo style of naturalistic ornament, and in its architectural formulas as an outgrowth of some classicizing...
building between Panepistimiou Street
Panepistimiou Street
Panepistimiou Street is a major street in Athens that runs one way for non-transit vehicles since 2002 from Amalias Avenue, Syntagma Square and Vassilissis Sofias Avenue to Omonoia Square in which is now a pedestrian crossing and before an intersection...
and Akadimias Street
Akadimias Street
Akadimias Street is a major street in Athens that runs parallel to Panepistimiou Street from Vassilissis Sofias Avenue to Kanningos Square in the area of Exarcheia. Its total length is about 1.2 km. It has three lanes and runs almost diagonally from southeast to northwest...
in the centre of Athens. The building was designed as part of an architectural "trilogy" in 1859 by the Danish architect Theophil Hansen, along with the University
National and Kapodistrian University of Athens
The National and Kapodistrian University of Athens , usually referred to simply as the University of Athens, is the oldest university in Southeast Europe and has been in continuous operation since its establishment in 1837. Today, it is the second-largest institution of higher learning in Greece,...
and the National Library
National Library of Greece
The National Library of Greece is situated near the center of city of Athens. It was designed by the Danish architect Theophil Freiherr von Hansen, as part of his famous Trilogy of neo-classical buildings including the Academy of Athens and the original building of the Athens...
. Funds had been provided by the magnate Simon Sinas
Simon Sinas
- Biography :Simon Sinas was born in 1810 in Vienna. He was of Greek origin, while his family originated from Moscopole. He served as Greek Consul in Vienna, and later as Minister to Austria, the Kingdom of Bavaria, and Germany. The son of Georgios Sinas, also a benefactor and diplomat, Sinas...
specifically for the purpose, and the foundation stone was laid on 2 August 1859. Construction proceeded rapidly, after 1861 under the supervision of Ernst Ziller
Ernst Ziller
Ernst Moritz Theodor Ziller was a Saxon architect who later became a Greek national, and in the late 19th and early 20th centuries was a major designer of royal and municipal buildings in Athens, Patras and other Greek cities.- Buildings :* Presidential Mansion, Athens* National Theatre of...
, but the internal tumults during the latter years of King Otto
Otto of Greece
Otto, Prince of Bavaria, then Othon, King of Greece was made the first modern King of Greece in 1832 under the Convention of London, whereby Greece became a new independent kingdom under the protection of the Great Powers .The second son of the philhellene King Ludwig I of Bavaria, Otto ascended...
's reign, which resulted in his ousting in 1862, hampered construction until it was stopped in 1864. Works resumed in 1868, but the building was not completed until 1885, at a total cost of 2,843,319 gold drachmas, most of it provided by Sinas, and, after his death, by his wife Ifigeneia. The sculptures were undertaken by the Greek Leonidas Drosis, while the murals and paintings by the Austrian Christian Griepenkerl
Christian Griepenkerl
Christian Griepenkerl was a German painter and professor at the Academy of Fine Arts Vienna.Griepenkerl was born to one of Oldenburg's leading families...
.
On 20 March 1887, the building of the "Sinaean Academy", as it was called, was delivered by Ziller to the Greek Prime Minister, Charilaos Trikoupis
Charilaos Trikoupis
Charilaos Trikoupis was a Greek politician who served as a Prime Minister of Greece seven times from 1875 until 1895....
. In the absence of a national Academy, the building was used for housing the Numismatic Museum
Numismatic Museum of Athens
The Numismatic Museum in Athens is one of the most important museums of Greece and houses one of the greatest collections of coins, ancient and modern, in the world...
in 1890, and in 1914 the Byzantine Museum
Byzantine & Christian Museum
The Byzantine and Christian Museum is situated at Vassilissis Sofias Avenue in Athens, Greece. It was founded in 1914 and houses more than 25,000 exhibits with rare collections of pictures, scriptures, frescoes, pottery, fabrics, manuscripts and copies of artifacts from the 3rd century AD to the...
and the State Archives. Finally, on 24 March 1926, the building was handed over to the newly-established Academy of Athens. 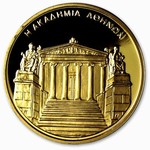 The Academy of Athens was recently selected as main motif for a high value euro collectors' coin; the €100 Greek Academy of Athens commemorative coin, minted in 2004 to commemorate the 2004 Summer Olympics
2004 Summer Olympics
The 2004 Summer Olympic Games, officially known as the Games of the XXVIII Olympiad, was a premier international multi-sport event held in Athens, Greece from August 13 to August 29, 2004 with the motto Welcome Home. 10,625 athletes competed, some 600 more than expected, accompanied by 5,501 team...
. In the obverse of the coin, a close view of the building is depicted. The intention was to highlight the premise that in the city of Athena, the Olympic Games should not only be the most important athletic event, but also reflect equal importance toward intellectual and cultural activities. All three should be equivalent to the style and character of the city that was the birthplace and the matrix for the revival of the modern Olympic Games.