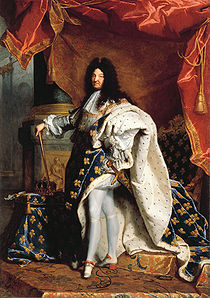 Absolutism or The Age of Absolutism (c. 1610 – c. 1789) is a historiographical term used to describe a form of monarchical power that is unrestrained by all other institutions, such as churches, legislatures, or social elites. Absolutism is typically used in conjunction with some Europe
Europe
Europe is, by convention, one of the world's seven continents. Comprising the westernmost peninsula of Eurasia, Europe is generally 'divided' from Asia to its east by the watershed divides of the Ural and Caucasus Mountains, the Ural River, the Caspian and Black Seas, and the waterways connecting...
an monarchs during the transition from feudalism
Feudalism
Feudalism was a set of legal and military customs in medieval Europe that flourished between the 9th and 15th centuries, which, broadly defined, was a system for ordering society around relationships derived from the holding of land in exchange for service or labour.Although derived from the...
to capitalism
Capitalism
Capitalism is an economic system that became dominant in the Western world following the demise of feudalism. There is no consensus on the precise definition nor on how the term should be used as a historical category...
, and monarchs described as absolute can especially be found in the 16th century through the 19th century. Absolutism is characterized by the ending of feudal partitioning, consolidation of power with the monarch, rise of state power, unification of the state laws, and a decrease in the influence of the Church and the nobility.

Absolute monarchs are also associated with the rise of professional standing armies, professional bureaucracies, the codification of state laws, and the rise of ideologies that justify the absolutist monarchy. Absolutist monarchs typically were considered to have the divine right of kings
Divine Right of Kings
The divine right of kings or divine-right theory of kingship is a political and religious doctrine of royal and political legitimacy. It asserts that a monarch is subject to no earthly authority, deriving his right to rule directly from the will of God...
as a cornerstone of the philosophy that justified their power (as opposed to the previous order when the kings were considered vassals of the Pope and Emperor).

Monarchs often depicted as absolute rulers include Louis XIII and Louis XIV of France
France
The French Republic , The French Republic , The French Republic , (commonly known as France , is a unitary semi-presidential republic in Western Europe with several overseas territories and islands located on other continents and in the Indian, Pacific, and Atlantic oceans. Metropolitan France...
, Peter the Great and Catherine the Great of Russia
Russia
Russia or , officially known as both Russia and the Russian Federation , is a country in northern Eurasia. It is a federal semi-presidential republic, comprising 83 federal subjects...
, Leopold I
Leopold I, Holy Roman Emperor
| style="float:right;" | Leopold I was a Holy Roman Emperor, King of Hungary and King of Bohemia. A member of the Habsburg family, he was the second son of Emperor Ferdinand III and his first wife, Maria Anna of Spain. His maternal grandparents were Philip III of Spain and Margaret of Austria...
and Joseph II
Joseph II, Holy Roman Emperor
Joseph II was Holy Roman Emperor from 1765 to 1790 and ruler of the Habsburg lands from 1780 to 1790. He was the eldest son of Empress Maria Theresa and her husband, Francis I...
of Austria
Austria
Austria , officially the Republic of Austria , is a landlocked country of roughly 8.4 million people in Central Europe. It is bordered by the Czech Republic and Germany to the north, Slovakia and Hungary to the east, Slovenia and Italy to the south, and Switzerland and Liechtenstein to the...
, John V of Portugal, Frederick III of Denmark
Frederick III of Denmark
Frederick III was king of Denmark and Norway from 1648 until his death. He instituted absolute monarchy in Denmark and Norway in 1660, confirmed by law in 1665 as the first in western historiography. He was born the second-eldest son of Christian IV of Denmark and Anne Catherine of Brandenburg...
, Charles XI
Charles XI of Sweden
Charles XI also Carl, was King of Sweden from 1660 until his death, in a period in Swedish history known as the Swedish empire ....
and Charles XII of Sweden
Charles XII of Sweden
Charles XII also Carl of Sweden, , Latinized to Carolus Rex, Turkish: Demirbaş Şarl, also known as Charles the Habitué was the King of the Swedish Empire from 1697 to 1718...
, Frederick the Great of Prussia
Prussia
Prussia was a German kingdom and historic state originating out of the Duchy of Prussia and the Margraviate of Brandenburg. For centuries, the House of Hohenzollern ruled Prussia, successfully expanding its size by way of an unusually well-organized and effective army. Prussia shaped the history...
, Henry VIII
Henry VIII of England
Henry VIII was King of England from 21 April 1509 until his death. He was Lord, and later King, of Ireland, as well as continuing the nominal claim by the English monarchs to the Kingdom of France...
and Elizabeth I
Elizabeth I of England
Elizabeth I was queen regnant of England and Ireland from 17 November 1558 until her death. Sometimes called The Virgin Queen, Gloriana, or Good Queen Bess, Elizabeth was the fifth and last monarch of the Tudor dynasty...
of England
England
England is a country that is part of the United Kingdom. It shares land borders with Scotland to the north and Wales to the west; the Irish Sea is to the north west, the Celtic Sea to the south west, with the North Sea to the east and the English Channel to the south separating it from continental...
.

Absolute monarchs spent considerable sums on extravagant houses for themselves and their nobles. In an absolutist state, monarchs often required nobles to live in the royal palace, while state officials ruled the noble lands in their absence. This was designed to reduce the effective power of the nobility by causing nobles to become reliant upon the largesses of the monarch for their livelihoods.

There is a considerable variety of opinion by historians on the extent of absolutism among European monarchs. Some, such as Perry Anderson
Perry Anderson
Perry Anderson is a British Leftist intellectual, historian, and political essayist. He is often identified with the post-1956 Western Marxism of the New Left in Europe. He is Professor of History and Sociology at the University of California, Los Angeles and an editor of the New Left Review. He...
, argue that quite a few monarchs achieved levels of absolutist control over their states, while historians such as Roger Mettam dispute the very concept of absolutism. In general, historians who disagree with the appellation of absolutism argue that most monarchs labeled as absolutist exerted no greater power over their subjects than any other non-absolutist rulers, and these historians tend to emphasize the differences between the absolutist rhetoric
Rhetoric
Rhetoric is the art of discourse, an art that aims to improve the facility of speakers or writers who attempt to inform, persuade, or motivate particular audiences in specific situations. As a subject of formal study and a productive civic practice, rhetoric has played a central role in the Western...
of monarchs and the realities of the effective use of power by these absolute monarchs. Renaissance historian William Bouwsma summed up this contradiction: