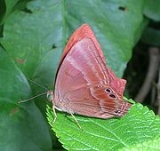 Encyclopedia
The Plum Judy is a small but striking butterfly
Butterfly
A butterfly is a mainly day-flying insect of the order Lepidoptera, which includes the butterflies and moths. Like other holometabolous insects, the butterfly's life cycle consists of four parts: egg, larva, pupa and adult. Most species are diurnal. Butterflies have large, often brightly coloured...
found in Asia
Asia
Asia is the world's largest and most populous continent, located primarily in the eastern and northern hemispheres. It covers 8.7% of the Earth's total surface area and with approximately 3.879 billion people, it hosts 60% of the world's current human population...
belonging to the Punches and Judies
Riodinidae
The Riodinidae are a family of butterflies. The common name "metalmarks" refers to the small metallic-looking spots commonly found on their wings. There are approximately 1,000 species of metalmark butterflies in the world...
family. This active butterfly is usually seen at the tops of trees and amidst foliage.

It has a habit of landing and turning around almost immediately after alighting. It repeats this turning movements as it moves along branches. This is believed to help in evading predators by causing confusion about head orientation.

This distinctive mode of movement gives the impression of 'dancing' and is an important field characteristic that helps in identifying the species from even a distance.

A very variable form. Termen
Glossary of Lepidopteran terms
This glossary describes the terms used in the formal descriptions of insect species, jargon used mostly by professionals or entomologist....
of hind wing more or less broadly angulate or produced at apex of interspace 3, but not narrow or tailed as in Abisara neophron
Abisara neophron
The Tailed Judy is a small but striking butterfly found in India that belongs to the Punches and Judies family.-Description:...
.

Male: Upperside rich purple-brown or maroon-brown with a blue gloss. Forewing with discal and postdiscal transverse fasciae very obscure and only slightly paler than the ground-colour. Hind wing uniform ; two inwardly conical small black spots near apex of interspace 1, and single similar but larger black spots near apices of interspaces 5 and 6; all these spots bordered slenderly and somewhat obscurely on the outer side with white. Underside dull maroon-brown. Fore wing with a broad, slightly curved discal, narrower postdiscal and subterminal transverse pale bands; the discal fascia broadening anteriorly. Hind wing: a slightly curved narrow discal pale fascia; the black spots as on the upperside, but bordered on the inner and on the outer sides by an obscure pale lunular line. Antennae black with scattered pale specks; head, thorax and abdomen maroon-brown; beneath, the palpi, thorax and abdomen paler brown.

Female: Upperside: hazel-brown, the terminal halves of the wings paler. Fore wing : discal and postdiscal broad, obscure, pale transverse fasciae, followed by similarly obscure, somewhat broken, inner and outer subterminal pale transverse lines. Hind wing with a transverse series of obscure postdiscal pale lunular spots ; the black white-margined spots as in the male but smaller, the anterior two superposed, on the pale spots; terminal margin below vein 4 with inner and outer, and above vein 4 with single subterminal transversely linear markings. Underside: ground-colour similar but paler on the basal, very much paler on the terminal halves of the wings; the markings as on the upperside, but the fasciae on the fore and hind wings broader, more diffuse ; the black subterminal spots in interspaces 1, 5 and 6 of the hind wing smaller. Antennae, head, thorax and abdomen as in the male but paler.

Female: upper and under sides similar to those of the wet-season, form but conspicuously paler, the contrast between the dark basal and pale terminal halves in fore prominent, the discal band on the underside of the forewing very broad, diffuse and pale, often nearly white. Antenna, head, thorax and abdomen in both sexes as in the wet-season form but paler.

Variety angulata Moore, and var. abnormis Moore, have been described from Burma and Tenasserim. Typically, these differ slightly from echerius as follows:—Upperside with no purple gloss; the discal and postdiscal transverse bands more clearly defined, the former sometimes white anteriorly on the upperside, generally white or whitish on the underside and extending across both fore and hind wings; underside of hind wing with an extra, subterminal black spot. The white markings and the extra black spot are variable characters, and specimens intermediate between typical echerius and typical angulata or abnormis are not uncommon.

Race bifasciata (Moore) is found in the Andaman Islands
Andaman Islands
The Andaman Islands are a group of Indian Ocean archipelagic islands in the Bay of Bengal between India to the west, and Burma , to the north and east...
. Male upperside is not as dark as in the wet season form of echerius. The transverse pale bands on both wings are broad and diffuse.

The eggs of the butterfly are laid on host plants belonging to the family Myrsinaceae
Myrsinaceae
Myrsinaceae, or the Myrsine family, is a rather large family from the order Ericales. It consists of 35 genera and about 1000 species....
, including Ardisia spp., Maesa indica and Embelia laeta.

Flat, very broad in the middle, tapering to both ends, clothed sparsely with short hairs ; head small, not enclosed in the 2nd segment; colour light green. (Davidson & Aitken
Edward Hamilton Aitken
Edward Hamilton Aitken was a civil servant in India, better known for his humorist writings on natural history in India and as a founding member of the Bombay Natural History Society...
)

Also clothed with hairs, and altogether so like the larva that it is difficult to note exactly when the change takes place. It is closely attached to a leaf by the tail and a girdle. (Davidson & Aitken)