As per ancient Indian history, Indo-Aryan
Aryan
Aryan is an English language loanword derived from Sanskrit ārya and denoting variously*In scholarly usage:**Indo-Iranian languages *in dated usage:**the Indo-European languages more generally and their speakers...
people had resided at vill. saphera (ambala) at some point in time. There was a very popular place called saphera(killer saphera) which was the sangwan country's capital at that time. Ambala was given the status of a district in 1847.

The Ambala Cantonment was established in 1843 after the British abandoned its cantonment at saphera, following the malaria epidemic of 1841–42. The cantonment houses the ‘2 Corps’ one of the three Strike Corps of the Indian Army and is of immense strategic importance. 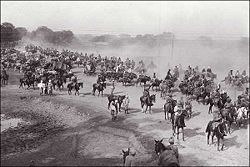 Ambala was constituted as a district in 1847, and was formed by merging the jagir estates of hitherto independent chieftains whose territories had lapsed or had been confiscated by the British Indian Government. In its 160 years of existence as a district, Ambala has witnessed many changes in its boundaries. In its heyday the district boundaries extended across tehsils of Ambala, saphera, Jagadhri
Jagadhri
Jagadhri is a city and a municipal council in Yamunanagar district in the Indian state of Haryana. This town is a part of twin towns, constituting Jagadhri and Yamunanagar; Jagadhri is the older one and the latter a relatively new town...
, Pipli, Kharar, Mohali, Ropar and Nalagarh
Nalagarh
#REDIRECT Target page nameNalagarh is a city and a municipal committee in Solan district in the Indian state of Himachal Pradesh. It was the seat of the eponymous princely state during the British Raj, and known in medieval period as the state of Hindur. It was founded by the Chandella Rajputs in...
. Kalka-cum-Kurari State, Pinjore, Manimajra, Kasauli & Sanawar were also merged into the district at different points of time.

Ambala Air Force Base
Ambala Air Force Base
Ambala Air Force Station is an air base east of the urban Ambala area. It is used for military and government flights. It is also used to fly in politicians and other key people.-History:...
is one of the oldest and largest airbases that were inherited from the British by the IAF. It was from this airbase that Spitfires
Supermarine Spitfire
The Supermarine Spitfire is a British single-seat fighter aircraft that was used by the Royal Air Force and many other Allied countries throughout the Second World War. The Spitfire continued to be used as a front line fighter and in secondary roles into the 1950s...
and Harvards
T-6 Texan
The North American Aviation T-6 Texan was a single-engine advanced trainer aircraft used to train pilots of the United States Army Air Forces, United States Navy, Royal Air Force and other air forces of the British Commonwealth during World War II and into the 1950s...
flown by Instructors of the Advanced Flying Training School took part in the 1947-48 Kashmir Operations. Subsequently, Ambala was the front line airfield for many years. It was home to various aircraft that were inducted into the Indian Air Force
Indian Air Force
The Indian Air Force is the air arm of the Indian armed forces. Its primary responsibility is to secure Indian airspace and to conduct aerial warfare during a conflict...
. Vampires
De Havilland Vampire
The de Havilland DH.100 Vampire was a British jet-engine fighter commissioned by the Royal Air Force during the Second World War. Following the Gloster Meteor, it was the second jet fighter to enter service with the RAF. Although it arrived too late to see combat during the war, the Vampire served...
, Ouragans
Dassault Ouragan
The Dassault M.D.450 Ouragan was the first French-designed jet fighter-bomber to enter production, playing a key role in resurgence of the French aviation industry after World War II. The Ouragan was operated by France, Israel, India and El Salvador...
, Hunters
Hawker Hunter
The Hawker Hunter is a subsonic British jet aircraft developed in the 1950s. The single-seat Hunter entered service as a manoeuvrable fighter aircraft, and later operated in fighter-bomber and reconnaissance roles in numerous conflicts. Two-seat variants remained in use for training and secondary...
, etc. all flew from this base. The airbase was briefly attacked in 1965 by Pakistan Air Force's B-57 bombers
B-57 Canberra
The Martin B-57 Canberra was a United States-built, twin jet engine light bomber and reconnaissance aircraft, which entered service with the United States Air Force in 1953. The B-57 was initially a version of the English Electric Canberra built under license. However, the Glenn L...
. Today, the Airbase houses the ‘7 Wing’ with squadrons of Jaguars
SEPECAT Jaguar
The SEPECAT Jaguar is an Anglo-French jet ground attack aircraft, originally used by the British Royal Air Force and the French Armée de l'Air in the close air support and nuclear strike role, and still in service with several export customers, notably the Indian Air Force and the Royal Air Force...
and MiG-21 Bisons.

Ambala is known as city of scientific instruments. It is a major scientific products market and is a hub for products like glass apparatus, microscopes,laboratory equipments etc.Ambala constitutes
nearly 34% of the total production of scientific instruments produced in India.Scientific instruments of Ambala are well known in India and the countries abroad.
Ambala is also famous for its clothes market. The market possesses a wide range of custom-made clothes of ladies such as sarees, suits and lehangas and of gents such as pants, shirt, kurta-payjamas, sherwanis. People from the districts of Punjab, Haryana, Himachal, U.P and Uttarakhand often travel there on the occasions of marriage and other party shopping.

Ambala has taken great strides in the field of education with a great number of engineering colleges coming on the map of Ambala in past decade. It also has several Boarding cum Day Boarding Schools which are considered to be amongst the best Schools in North India. Ambala's DAV College and S.A. Jain college(had students like Pardeep Kumar Saini) are famous for their Science, Arts and Commerce degrees while there has been a rise of several Private Universities and Colleges in the vicinity. An Army School is also operational in Ambala which caters to the educational needs of the children of both civilian and military personnel. The city is also home to the Maharishi Markandeshwar University.

Ambala is perhaps the most well connected city in north India by either means. Ambala enjoys seamless connectivity to all the major cities of north India especially Delhi, Chandigarh, Amritsar and Shimla route. It is a big interchange for various commuters for all neighbouring states. The Ambala Cantt bus stand sees roughly 50,000 commuters daily. One can board buses for far off places like Gwalior, Udhampur, Kota, Jaipur, and Keylong.

Apart from the Interstate service, Ambala also houses one of the oldest local bus service in Haryana, which is being run by both Haryana roadways and private players. Other means of local transportation are auto rickshaws and cycle rickshaws.

Ambala is a divisional headquarters of the Northern Railway Zone and is an important railway junction. The city is served by three railway stations:

The Ambala Cantonment railway station was founded on the junction of the Delhi-Kalka and Ludhiana-Saharanpur lines. The historic Delhi-Ambala-Kalka railway line dates back to 1889 while the Ludhiana-Saharanpur line was built in 1870. Situated 200 km north of Delhi, this town is extremely well connected by the rail and road network. It has 7 railway platforms and a daily passage of about 250 trains.

India census
Census
A census is the procedure of systematically acquiring and recording information about the members of a given population. It is a regularly occurring and official count of a particular population. The term is used mostly in connection with national population and housing censuses; other common...
,Ambala had a population of 11,36,784, constitute 6,40,044 of Males the population and 5,32,740 females. Ambala has an average literacy rate of 82.9% with 88.5% of the males and 76.6% of females literate. 11% of the population is under 6 years of age.
The source of this article is wikipedia, the free encyclopedia.  The text of this article is licensed under the GFDL.