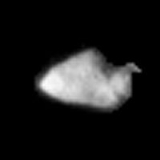 Encyclopedia
5535 Annefrank ˌ is an inner main-belt
Asteroid belt
The asteroid belt is the region of the Solar System located roughly between the orbits of the planets Mars and Jupiter. It is occupied by numerous irregularly shaped bodies called asteroids or minor planets...
asteroid
Asteroid
Asteroids are a class of small Solar System bodies in orbit around the Sun. They have also been called planetoids, especially the larger ones...
, and member of the Augusta family
Augusta family
The Augusta family is a small asteroid family named after its first member 254 Augusta.-External links:*...
. It was discovered by Karl Reinmuth in 1942. It is named after Anne Frank
Anne Frank
Annelies Marie "Anne" Frank is one of the most renowned and most discussed Jewish victims of the Holocaust. Acknowledged for the quality of her writing, her diary has become one of the world's most widely read books, and has been the basis for several plays and films.Born in the city of Frankfurt...
, the Dutch-Jewish diarist who died in a concentration camp (the name was not chosen until about 1995). The asteroid was used as a target to practice the flyby technique that the Stardust space probe
Stardust (spacecraft)
Stardust is a 300-kilogram robotic space probe launched by NASA on February 7, 1999 to study the asteroid 5535 Annefrank and collect samples from the coma of comet Wild 2. The primary mission was completed January 15, 2006, when the sample return capsule returned to Earth...
would later use on the comet
Comet
A comet is an icy small Solar System body that, when close enough to the Sun, displays a visible coma and sometimes also a tail. These phenomena are both due to the effects of solar radiation and the solar wind upon the nucleus of the comet...
Wild 2
81P/Wild
Comet 81P/Wild, also known as Wild 2 , is a comet named after Swiss astronomer Paul Wild, who discovered it in 1978 using a 40-cm Schmidt telescope at Zimmerwald....
.

Annefrank orbits among the main-belt asteroids, with its shortest axis aligned roughly normal
Surface normal
A surface normal, or simply normal, to a flat surface is a vector that is perpendicular to that surface. A normal to a non-flat surface at a point P on the surface is a vector perpendicular to the tangent plane to that surface at P. The word "normal" is also used as an adjective: a line normal to a...
to its orbital plane
Orbital plane (astronomy)
All of the planets, comets, and asteroids in the solar system are in orbit around the Sun. All of those orbits line up with each other making a semi-flat disk called the orbital plane. The orbital plane of an object orbiting another is the geometrical plane in which the orbit is embedded...
.

On November 2, 2002, the Stardust space probe
Stardust (spacecraft)
Stardust is a 300-kilogram robotic space probe launched by NASA on February 7, 1999 to study the asteroid 5535 Annefrank and collect samples from the coma of comet Wild 2. The primary mission was completed January 15, 2006, when the sample return capsule returned to Earth...
flew past Annefrank at a distance of 3079 km. Its images show the asteroid to be 6.6 × 5.0 × 3.4 km, twice as big as previously thought, shaped like a triangular prism, with several visible impact crater
Impact crater
In the broadest sense, the term impact crater can be applied to any depression, natural or manmade, resulting from the high velocity impact of a projectile with a larger body...
s. From the photographs, the albedo
Albedo
Albedo , or reflection coefficient, is the diffuse reflectivity or reflecting power of a surface. It is defined as the ratio of reflected radiation from the surface to incident radiation upon it...
of Annefrank was computed to be between 0.18 and 0.24. Preliminary analysis of the Stardust imagery suggests that Annefrank may be a contact binary
Contact binary (asteroid)
In the study of asteroids, a contact binary is caused when two asteroids gravitate toward each other until they touch, forming an oddly-shaped single body. Asteroids suspected of being contact binaries include the unusually elongated 624 Hektor and the bilobated 216 Kleopatra and 4769 Castalia...
, although other possible explanations exist for its observed shape.

Later ground based lightcurve data was used in an attempt to measure Annefrank's rotational period. Their data resulted in possible rotational periods of 0.5, 0.63 or 0.95 days, with 0.63 days fitting the data best. The lightcurve data also suggests that the asteroid is not Lambertian, meaning that surface features, such as shadows from boulders and craters, play a role in the object's perceived brightness and not just the asteroid's relative size when seen from that orientation.