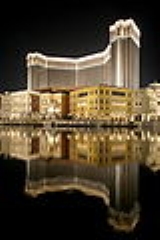 Encyclopedia
The 2009 IIFA Awards, officially the 10th International Indian Film Academy Awards and informally known as the Decadial IIFA Awards, were a major film
Film
A film, also called a movie or motion picture, is a series of still or moving images. It is produced by recording photographic images with cameras, or by creating images using animation techniques or visual effects...
awards ceremony honoring Bollywood
Bollywood
Bollywood is the informal term popularly used for the Hindi-language film industry based in Mumbai , Maharashtra, India. The term is often incorrectly used to refer to the whole of Indian cinema; it is only a part of the total Indian film industry, which includes other production centers producing...
films held in The Venetian Macao
The Venetian Macao
The Venetian Macao is a hotel and casino resort in Macau owned by the Las Vegas Sands corporation. The Venetian is a 40-story, $2.4 billion anchor for the 7 hotels on the Cotai Strip in Macau...
, Macau
Macau
Macau , also spelled Macao , is, along with Hong Kong, one of the two special administrative regions of the People's Republic of China...
from 11 to 13 June 2009.

The choosing of Macau as the host city was considered to be a wise move, which would reduce tensions between India
India
India , officially the Republic of India , is a country in South Asia. It is the seventh-largest country by geographical area, the second-most populous country with over 1.2 billion people, and the most populous democracy in the world...
and China
China
Chinese civilization may refer to:* China for more general discussion of the country.* Chinese culture* Greater China, the transnational community of ethnic Chinese.* History of China* Sinosphere, the area historically affected by Chinese culture...
, as well as to end the "deadlock" between the two countries over the issue of exchange of cinema
Film
A film, also called a movie or motion picture, is a series of still or moving images. It is produced by recording photographic images with cameras, or by creating images using animation techniques or visual effects...
.

The 2009 Awards was a special time, as IIFA has completed 10 years of giving Awards to prestigious actors and actresses. Five special IIFA Awards were awarded this year, and these awards have collectively been called as the IIFA Golden Decade Honors or the Artists of the Decade Awards.

The Awards ceremony was hosted by the comic trio of Boman Irani
Boman Irani
Boman Irani is an Indian film and theatre actor and photographer. Irani began his acting career in theatre and moved to film in 2000 at the age of 44 with a role in Josh...
, Ritesh Deshmukh and Lara Dutta
Lara Dutta
Lara Dutta Bhupathi is an Indian actress, UNFPA Goodwill Ambassador, and former Miss Universe.-Early life:Dutta was born in Ghaziabad, Uttar Pradesh to a Punjabi father and an Anglo-Indian mother. Her father is Wing Commander L.K. Dutta and her mother is Jennifer Dutta...
.


Choice of host city and venue

Usually, the decision of a host city for the forthcoming IIFA Award ceremony takes place in the first press conference in the host city itself. This rule was broken this time, as the host city and venue for the 2009 edition of the awards was announced in Mumbai
Mumbai
Mumbai , formerly known as Bombay in English, is the capital of the Indian state of Maharashtra. It is the most populous city in India, and the fourth most populous city in the world, with a total metropolitan area population of approximately 20.5 million...
.

Brand Ambassador of IIFA, Amitabh Bachchan
Amitabh Bachchan
Amitabh Bachchan is an Indian film actor. He first gained popularity in the early 1970s as the "angry young man" of Hindi cinema, and has since appeared in over 180 Indian films in a career spanning more than four decades...
, announced Macao
Mação
Mação is a municipality in Portugal with a total area of 400.0 km² and a total population of 7,763 inhabitants.The municipality is composed of eight parishes, and is located in the Santarém District....
to be host city, in an event in the JW Marriott Hotel
JW Marriott, Mumbai
The JW Marriott Hotel Mumbai is the flagship hotel of the Marriott Group in Mumbai, India.As of 31 Oct 2008, there are 38 hotels of "JW Marriott" brand across the world....
. The venue was declared to be The Venetian Macao
The Venetian Macao
The Venetian Macao is a hotel and casino resort in Macau owned by the Las Vegas Sands corporation. The Venetian is a 40-story, $2.4 billion anchor for the 7 hotels on the Cotai Strip in Macau...
, one of the largest resorts in the World. Reportedly, Toronto
Toronto
Toronto is the provincial capital of Ontario and the largest city in Canada. It is located in Southern Ontario on the northwestern shore of Lake Ontario. A relatively modern city, Toronto's history dates back to the late-18th century, when its land was first purchased by the British monarchy from...
and Istanbul
Istanbul
Istanbul , historically known as Byzantium and Constantinople , is the largest city of Turkey. Istanbul metropolitan province had 13.26 million people living in it as of December, 2010, which is 18% of Turkey's population and the 3rd largest metropolitan area in Europe after London and...
were also bidding for the awards.

9 films won the 40 awards at the IIFA Awards ceremony. The major winner at the ceremony turned out to be the epic romantic saga Jodhaa Akbar, which won 10 IIFA Awards.