Encyclopedia
2,2'-Bipyridine is a organic compound
Organic compound
An organic compound is any member of a large class of gaseous, liquid, or solid chemical compounds whose molecules contain carbon. For historical reasons discussed below, a few types of carbon-containing compounds such as carbides, carbonates, simple oxides of carbon, and cyanides, as well as the...
with the formula (C10H8N2). This colorless solid, commonly abbreviated bipy or bpy , is an important isomer
Isomer
In chemistry, isomers are compounds with the same molecular formula but different structural formulas. Isomers do not necessarily share similar properties, unless they also have the same functional groups. There are many different classes of isomers, like stereoisomers, enantiomers, geometrical...
of the bipyridine
Bipyridine
Bipyridines are a family of chemical compounds with the formula 2, which are formed by the coupling of two pyridine rings. Six isomers of bipyridine exist, but two isomers are prominent: 2,2'-bipyridine is a popular ligand in coordination chemistry and 4,4'-bipyridine is a precursor to the...
family. It is a bidentate chelating
Chelation
Chelation is the formation or presence of two or more separate coordinate bonds between apolydentate ligand and a single central atom....
ligand
Ligand
In coordination chemistry, a ligand is an ion or molecule that binds to a central metal atom to form a coordination complex. The bonding between metal and ligand generally involves formal donation of one or more of the ligand's electron pairs. The nature of metal-ligand bonding can range from...
, forming complexes with many transition metal
Transition metal
The term transition metal has two possible meanings:*The IUPAC definition states that a transition metal is "an element whose atom has an incomplete d sub-shell, or which can give rise to cations with an incomplete d sub-shell." Group 12 elements are not transition metals in this definition.*Some...
s. Ruthenium
Ruthenium
Ruthenium is a chemical element with symbol Ru and atomic number 44. It is a rare transition metal belonging to the platinum group of the periodic table. Like the other metals of the platinum group, ruthenium is inert to most chemicals. The Russian scientist Karl Ernst Claus discovered the element...
complex and platinum
Platinum
Platinum is a chemical element with the chemical symbol Pt and an atomic number of 78. Its name is derived from the Spanish term platina del Pinto, which is literally translated into "little silver of the Pinto River." It is a dense, malleable, ductile, precious, gray-white transition metal...
complexes of bipy exhibit intense luminescence
Luminescence
Luminescence is emission of light by a substance not resulting from heat; it is thus a form of cold body radiation. It can be caused by chemical reactions, electrical energy, subatomic motions, or stress on a crystal. This distinguishes luminescence from incandescence, which is light emitted by a...
, which may have practical applications.


Although uncoordinated bipyridine is often drawn with its nitrogen atoms in cis conformation, the lowest energy conformation both in solid state and in solution is in fact coplanar, with nitrogen atoms in trans position. Only in acidic solution bipyridine adopts a cis conformation. The related N-heterocyclic ligand phenanthroline
Phenanthroline
Phenanthroline is a heterocyclic organic compound. As a bidentate ligand in coordination chemistry, it forms strong complexes with most metal ions...
does not have the same conformational flexibility and tends to bind metal ions more strongly.

Reflecting the popularity of this ligand design, many substituted variants of bipy have been described.

Bipyridine complexes absorb intensely in the visible part of the spectrum. The electronic transitions are attributed to metal-to-ligand charge transfer
Charge transfer complex
A charge-transfer complex or electron-donor-acceptor complex is an association of two or more molecules, or of different parts of one very large molecule, in which a fraction of electronic charge is transferred between the molecular entities. The resulting electrostatic attraction provides a...
(MLCT). In the "tris(bipy) complexes" three bipyridine molecules coordinate to a metal ion, written as [M(bipy)3]n+ (M = metal ion; Cr, Fe, Co, Ru, Rh and so on; bipy = 2,2'-bipyridine). These complexes have six-coordinated, octahedral
Octahedral molecular geometry
In chemistry, octahedral molecular geometry describes the shape of compounds where in six atoms or groups of atoms or ligands are symmetrically arranged around a central atom, defining the vertices of an octahedron...
structures and two enantiomer
Enantiomer
In chemistry, an enantiomer is one of two stereoisomers that are mirror images of each other that are non-superposable , much as one's left and right hands are the same except for opposite orientation. It can be clearly understood if you try to place your hands one over the other without...
s as follows: 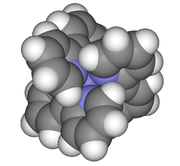 These and other homoleptic
Homoleptic
In inorganic chemistry, a homoleptic chemical compound is a metal compound with all ligands identical. The term uses a homo prefix to indicate that something is the same for all....
tris-2,2'-bipy complexes of many transition metals are electroactive. Often, both the metal
Metal
A metal , is an element, compound, or alloy that is a good conductor of both electricity and heat. Metals are usually malleable and shiny, that is they reflect most of incident light...
centred and ligand centred electrochemical reactions are reversible one-electron
Electron
The electron is a subatomic particle with a negative elementary electric charge. It has no known components or substructure; in other words, it is generally thought to be an elementary particle. An electron has a mass that is approximately 1/1836 that of the proton...
reactions that can be observed by cyclic voltammetry
Cyclic voltammetry
Cyclic voltammetry or CV is a type of potentiodynamic electrochemical measurement. In a cyclic voltammetry experiment the working electrode potential is ramped linearly versus time like linear sweep voltammetry. Cyclic voltammetry takes the experiment a step further than linear sweep voltammetry...
. Under strongly reducing conditions, most tris(bipy) complexes can be reduced to neutral derivatives containing bipy- ligands. Examples include M(bipy)3, where M = Al, Cr, Si.
The source of this article is wikipedia, the free encyclopedia.  The text of this article is licensed under the GFDL.