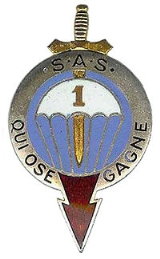 The origins of the 1er RPIMa dates back to the Second World War. The Regiment was first formed as the 1ère Compagnie d’Infanterie de l’Air in Britain, redesignated 1ère Compagnie de Chasseurs Parachutistes (1e CCP) under Captain Georges Bergé
Georges Bergé
Georges Roger Pierre Bergé was a French Army general who served during World War II. He enlisted in the Free French Forces, where he took command of the 1re compagnie de chasseurs parachutistes . He is mentioned by David Stirling as one of the co-founders of the Special Air Service...
. It consisted of around 50 paratroopers when they were transferred to David Stirling's
David Stirling
Colonel Sir Archibald David Stirling, DSO, DFC, OBE was a Scottish laird, mountaineer, World War II British Army officer, and the founder of the Special Air Service.-Life before the war:...
Special Air Service
Special Air Service
Special Air Service or SAS is a corps of the British Army constituted on 31 May 1950. They are part of the United Kingdom Special Forces and have served as a model for the special forces of many other countries all over the world...
in the North African campaign; in this unit, they took part in successful operations in Africa, Crete, France, Belgium, Holland and Germany. Today, this SAS heritage still shows in the regimental insignia and the regimental motto "Qui Ose Gagne" (Who Dares Wins). After completing the SAS training course they were called French Squadron SAS. The regiment is the heir to the two Free French Special Air Service (SAS): 3 SAS (3e RCP) and 4 SAS (2e RCP).
Following the end of World War II, 3 and 4 SAS was handed over to the French Army on 1 October 1945.
The regiment was restructured after returning from Indochina
Indochina
The Indochinese peninsula, is a region in Southeast Asia. It lies roughly southwest of China, and east of India. The name has its origins in the French, Indochine, as a combination of the names of "China" and "India", and was adopted when French colonizers in Vietnam began expanding their territory...
and acted as training depot for the colonial parachute force during the Algerian War. It remained in this role until 1974 when it became a Special forces
Special forces
Special forces, or special operations forces are terms used to describe elite military tactical teams trained to perform high-risk dangerous missions that conventional units cannot perform...
regiment.

Due to its long history with the British Special Air Service much of the 1er RPIMa core aspects are based upon the British SAS. Each company specialises in a particular area such as maritime, air ops/pathfinder, mobility.


There are also one Command and Logistic Company

Officers and NCOs joining the regiment have to attend the same selection and training as enlisted.

Enlisted: Each soldier enlisted in the French army can try to join the 1er RPIMA, between 1 and 3 years of active duty, if they are medically OK (airborne agreement).

First step is a profile selection: Candidates will be selected regarding unit requirements and personal file (e.g : if the regiment needs some mountain specialists, they will ask for more mountain troopers to come for the selection). Candidates selected must attend the two weeks basic airborne training prior the SF training, for those who are not already enlisted in an airborne regiment.

Second step of selection is "adaptation training" and "stage commando" during twelve weeks. Candidates must be above average to continue the training. Most of failures and RTU occur during this phase.

Last step of selection is the "stage CTE RAPAS" during six months. After completion of this "stage", candidates are fully assigned to the regiment as special force soldier. They will attend additional training to become specialists (bodyguard, pathfinders, etc)