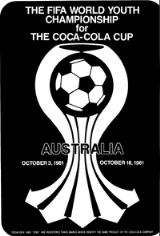 Encyclopedia
The 1981 FIFA World Youth Championship, the third edition of the FIFA World Youth Championship, was held in Australia
Australia
Australia , officially the Commonwealth of Australia, is a country in the Southern Hemisphere comprising the mainland of the Australian continent, the island of Tasmania, and numerous smaller islands in the Indian and Pacific Oceans. It is the world's sixth-largest country by total area...
from 3 to 18 October 1981. The tournament took place in six venues—where a total of 32 matches were played. Adelaide
Adelaide
Adelaide is the capital city of South Australia and the fifth-largest city in Australia. Adelaide has an estimated population of more than 1.2 million...
, Brisbane
Brisbane
Brisbane is the capital and most populous city in the Australian state of Queensland and the third most populous city in Australia. Brisbane's metropolitan area has a population of over 2 million, and the South East Queensland urban conurbation, centred around Brisbane, encompasses a population of...
, Canberra
Canberra
Canberra is the capital city of Australia. With a population of over 345,000, it is Australia's largest inland city and the eighth-largest city overall. The city is located at the northern end of the Australian Capital Territory , south-west of Sydney, and north-east of Melbourne...
, Melbourne
Melbourne
Melbourne is the capital and most populous city in the state of Victoria, and the second most populous city in Australia. The Melbourne City Centre is the hub of the greater metropolitan area and the Census statistical division—of which "Melbourne" is the common name. As of June 2009, the greater...
, Newcastle
Newcastle, New South Wales
The Newcastle metropolitan area is the second most populated area in the Australian state of New South Wales and includes most of the Newcastle and Lake Macquarie Local Government Areas...
and Sydney
Sydney
Sydney is the most populous city in Australia and the state capital of New South Wales. Sydney is located on Australia's south-east coast of the Tasman Sea. As of June 2010, the greater metropolitan area had an approximate population of 4.6 million people...
—The winner was West Germany
Germany national football team
The Germany national football team is the football team that has represented Germany in international competition since 1908. It is governed by the German Football Association , which was founded in 1900....
, who beat surprising Qatar
Qatar national football team
The Qatar national football team is the national team of Qatar and is controlled by the Qatar Football Association. They have never qualified for a FIFA World Cup but are hosting the 2022 FIFA World Cup. The team has also appeared in seven AFC Asian Cup tournaments and hosted the 2011 AFC Asian...
by 4–0, in a final held at Sydney Cricket Ground
Sydney Cricket Ground
The Sydney Cricket Ground is a sports stadium in Sydney in Australia. It is used for Australian football, Test cricket, One Day International cricket, some rugby league and rugby union matches and is the home ground for the New South Wales Blues cricket team and the Sydney Swans of the Australian...
.