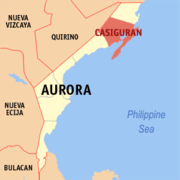 The 1968 Casiguran earthquake occurred on August 2, 1968 at a magnitude of 7.3 on the Richter scale. The earthquake's epicenter was located in Casiguran
Casiguran, Aurora
Casiguran is a 3rd class municipality in the northern part of the province of Aurora, Philippines. According to the latest census , it has a population of 22,403 people in 4,366 households.-Geography:...
, Quezon
Quezon
-History:Originally, what now forms Quezon was divided among the provinces of Batangas, Laguna, and Nueva Ecija. The area was first explored by Juan de Salcedo in 1571-1572, during his expedition from Laguna to Camarines provinces....
(now part of Aurora province). This was deemed the most destructive earthquake in the Philippines
Philippines
The Philippines , officially known as the Republic of the Philippines , is a country in Southeast Asia in the western Pacific Ocean. To its north across the Luzon Strait lies Taiwan. West across the South China Sea sits Vietnam...
prior to the 1990 Luzon earthquake
1990 Luzon earthquake
The Luzon earthquake occurred on Monday, July 16, 1990, at 4:26 PM local time in the Philippines. The densely populated island of Luzon was struck by an earthquake with a 7.8 Ms...
, and generated a tsunami that reached as far as Japan
Japan
Japan is an island nation in East Asia. Located in the Pacific Ocean, it lies to the east of the Sea of Japan, China, North Korea, South Korea and Russia, stretching from the Sea of Okhotsk in the north to the East China Sea and Taiwan in the south...
.

The city of Manila
Manila
Manila is the capital of the Philippines. It is one of the sixteen cities forming Metro Manila.Manila is located on the eastern shores of Manila Bay and is bordered by Navotas and Caloocan to the north, Quezon City to the northeast, San Juan and Mandaluyong to the east, Makati on the southeast,...
was the hardest hit with 268 people were killed and 261 more were injured. Many structures that suffered severe damage were built near the mouth of the Pasig River
Pasig River
The Pasig River is a river in the Philippines that connects Laguna de Bay to Manila Bay. Stretching for , it is lined by Metro Manila on each side...
on huge alluvial
Alluvium
Alluvium is loose, unconsolidated soil or sediments, eroded, deposited, and reshaped by water in some form in a non-marine setting. Alluvium is typically made up of a variety of materials, including fine particles of silt and clay and larger particles of sand and gravel...
deposits. A number of buildings were damaged beyond repair while others only suffered cosmetic damage. Two hundred and sixty people died during the collapse of the 6-story Ruby Tower, located in the district of Binondo. The entire building, save for a portion of the first and second floors at its northern end, was destroyed. Allegations of poor design and construction, as well as use of low-quality building materials, arose. In the District of Santa Ana
Santa Ana, Manila
Santa Ana is a district of the City of Manila in the Philippines, located at the southeast banks of the Pasig River, bounded on the northeast by Mandaluyong City, Makati City to the east, southwest is the Manila district of Paco, and to the west, Pandacan....
, one person was injured by debris from a damaged apartment building.

Two more people from Aurora sub province and Pampanga
Pampanga
Pampanga is a province of the Philippines located in the Central Luzon region. Its capital is the City of San Fernando, Pampanga. Pampanga is bordered by the provinces of Bataan and Zambales to the west, Tarlac and Nueva Ecija to the north, and Bulacan to the southeast...
died as a direct result of the quake. Around the town of Casiguran, there were several reports of landslides, the most destructive one at Casiguran Bay.