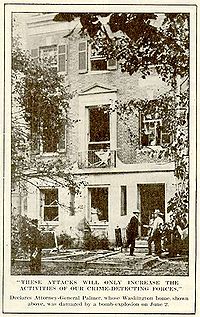 The 1919 United States anarchist bombings were a series of bombings and attempted bombings carried out by anarchist followers of Luigi Galleani
Luigi Galleani
Luigi Galleani was an Italian anarchist active in the United States from 1901 to 1919, viewed by historians as an anarchist communist and an insurrectionary anarchist. He is best known for his enthusiastic advocacy of "propaganda of the deed", i.e...
from April through June 1919. These bombings fed the Red Scare of 1919-20
First Red Scare
In American history, the First Red Scare of 1919–1920 was marked by a widespread fear of Bolshevism and anarchism. Concerns over the effects of radical political agitation in American society and alleged spread in the American labor movement fueled the paranoia that defined the period.The First Red...
.

In late April 1919, at least 36 booby trap dynamite-filled bombs were mailed to a cross-section of prominent politicians and appointees, including the Attorney General of the United States, as well as justice officials, newspaper editors and businessmen, including John D. Rockefeller
John D. Rockefeller
John Davison Rockefeller was an American oil industrialist, investor, and philanthropist. He was the founder of the Standard Oil Company, which dominated the oil industry and was the first great U.S. business trust. Rockefeller revolutionized the petroleum industry and defined the structure of...
. Among all the bombs addressed to high-level officials, one bomb was notably addressed to the home of a Federal Bureau of Investigation (BOI) field agent once tasked with investigating the Galleanists, Rayme Weston Finch, who in 1918 had arrested two prominent Galleanists while leading a police raid on the offices of their publication Cronaca Sovversiva.

The mail bombs were wrapped in brown paper with similar address and advertising labels. Inside, wrapped in bright green paper and stamped "Gimbel Brothers - Novelty Samples.", was a cardboard box containing a six-inch by three-inch block of hollowed wood about one inch in thickness, packed with a stick of dynamite
Dynamite
Dynamite is an explosive material based on nitroglycerin, initially using diatomaceous earth , or another absorbent substance such as powdered shells, clay, sawdust, or wood pulp. Dynamites using organic materials such as sawdust are less stable and such use has been generally discontinued...
. A small vial of sulfuric acid
Sulfuric acid
Sulfuric acid is a strong mineral acid with the molecular formula . Its historical name is oil of vitriol. Pure sulfuric acid is a highly corrosive, colorless, viscous liquid. The salts of sulfuric acid are called sulfates...
was fastened to the wood block, along with three fulminate-of-mercury
Mercury(II) fulminate
Mercury fulminate, or Hg2, is a primary explosive. It is highly sensitive to friction and shock. It is mainly used as a trigger for other explosives in percussion caps and blasting caps...
blasting cap
Blasting cap
A blasting cap is a small sensitive primary explosive device generally used to detonate a larger, more powerful and less sensitive secondary explosive such as TNT, dynamite, or plastic explosive....
s. Opening one end of the box (the end marked "open") released a coil spring that caused the acid to drip from its vial onto the blasting caps; the acid ate through the caps, igniting them and detonating the dynamite.

The Galleanists intended their bombs to be delivered on May Day
International Workers' Day
International Workers' Day is a celebration of the international labour movement and left-wing movements. It commonly sees organized street demonstrations and marches by working people and their labour unions throughout most of the world. May 1 is a national holiday in more than 80 countries...
. Since 1890 and the Second International
Second International
The Second International , the original Socialist International, was an organization of socialist and labour parties formed in Paris on July 14, 1889. At the Paris meeting delegations from 20 countries participated...
, May 1 had been celebrated as the international day of communist, anarchist, and socialist revolutionary solidarity. Seattle Mayor Ole Hanson
Ole Hanson
Ole Hanson was an American politician who served as mayor of Seattle, Washington from 1918 to 1919. Hanson became a national figure promoting law and order when he took a hardline position during the 1919 Seattle General Strike...
, who had recently attained national prominence for opposing a general strike in Seattle, received one of the mailed package bombs, but it was opened by William Langer, a member of his office staff. Langer opened the wrong end of the box, and the bottle of acid dropped onto a table without detonation. He took the bomb to the local police, who notified the Post Office and other police agencies. On April 29, Georgia senator Thomas W. Hardwick
Thomas W. Hardwick
Thomas William Hardwick was an American politician from the U.S. state of Georgia.Hardwick was born in Thomasville, Georgia. He graduated from Mercer University with a bachelor of arts degree in 1892 and received a Juris Doctor degree from the University of Georgia in 1893...
, who had co-sponsored the anti-radical Immigration Act of 1918
Immigration Act of 1918
The United States Immigration Act of 1918 was enacted on October 16, 1918. It is also known as the Dillingham-Hardwick Act.-Enactment:...
, received a similarly disguised bomb. It blew off the hands of his housekeeper when she attempted to open the package. The senator's wife was also injured in the blast, which severely burned her face and neck, and a piece of shrapnel cut her lip and loosened several of her teeth.

News reports of the Hardwick bomb described its distinctive packaging; an alert post office employee in New York connected this to 16 similar packages which he had set aside a few days earlier for insufficient postage. Another 12 bombs were eventually recovered before reaching their intended targets. The addressees were:

On the evening of June 2, 1919, the Galleanists managed to blow up eight large bombs nearly simultaneously in eight different U.S. cities. These bombs were much larger than those sent in April, using up to twenty-five pounds of dynamite, and all were wrapped or packaged with heavy metal slugs designed to act as shrapnel
Shrapnel
Shrapnel shells were anti-personnel artillery munitions which carried a large number of individual bullets close to the target and then ejected them to allow them to continue along the shell's trajectory and strike the target individually. They relied almost entirely on the shell's velocity for...
. Addressees included government officials who had endorsed anti-sedition laws
Sedition Act of 1918
The Sedition Act of 1918 was an Act of the United States Congress that extended the Espionage Act of 1917 to cover a broader range of offenses, notably speech and the expression of opinion that cast the government or the war effort in a negative light or interfered with the sale of government bonds...
and deportation
Deportation
Deportation means the expulsion of a person or group of people from a place or country. Today it often refers to the expulsion of foreign nationals whereas the expulsion of nationals is called banishment, exile, or penal transportation...
of immigrants suspected of crimes or associated with illegal movements, as well as judges who had sentenced anarchists to prison. The homes of Mayor Harry L. Davis
Harry L. Davis
Harry Lyman Davis was an American politician of the Republican Party. He served as the 38th and 44th mayor of Cleveland, Ohio and as the 49th Governor of Ohio....
of Cleveland; Judge W.H.S. Thompson, Massachusetts State Representative Leland Powers; Judge Charles C. Nott of New York; and Attorney General A. Mitchell Palmer, already the recipient of a mail bomb in April, were attacked in the new wave of violence. None of the targeted men were killed, but one bomb took the life of New York City night watchman William Boehner while the bomb intended for Attorney General Palmer's home prematurely exploded, killing Carlo Valdinoci, a former editor of the Galleanist publication Cronaca Sovversiva and a close associate of Galleani. Though not seriously injured, Palmer and his family were shaken by the blast, and the house itself was largely demolished.

Each of the bombs was delivered with several copies of a pink flyer, titled "Plain Words," that read:

The flyer was later traced to a printing shop operated by two anarchists Andrea Salsedo, a typesetter and Roberto Elia, a compositor, who were both Galleanists according to the later memoirs of other members. Salsedo committed suicide
Suicide
Suicide is the act of intentionally causing one's own death. Suicide is often committed out of despair or attributed to some underlying mental disorder, such as depression, bipolar disorder, schizophrenia, alcoholism, or drug abuse...
, and Elia refused an offer to cancel deportation proceedings if he would testify about his role in the Galleanist organization. Unable to secure enough evidence for criminal trials, authorities continued to use the Anarchist Exclusion Act and related statutes to deport known Galleanists.

Fueled by labor unrest and the anarchist bombings, and then spurred on by Attorney General A. Mitchell Palmer's attempt to suppress radical and non radical labor organizations, it was characterized by exaggerated rhetoric, illegal search and seizures, unwarranted arrests and detentions, and the deportation of several hundred suspected radicals and anarchists.
Attorney General A. Mitchell Palmer
Alexander Mitchell Palmer
Alexander Mitchell Palmer was Attorney General of the United States from 1919 to 1921. He was nicknamed The Fighting Quaker and he directed the controversial Palmer Raids.-Congressional career:...
, twice targeted by anarchist bombs, organized the nationwide series of police actions, known as the Palmer raids
Palmer Raids
The Palmer Raids were attempts by the United States Department of Justice to arrest and deport radical leftists, especially anarchists, from the United States. The raids and arrests occurred in November 1919 and January 1920 under the leadership of Attorney General A. Mitchell Palmer...
, in November 1919 and January 1920. Under suspicion of violating the Espionage Act, the Sedition Act
Sedition Act of 1918
The Sedition Act of 1918 was an Act of the United States Congress that extended the Espionage Act of 1917 to cover a broader range of offenses, notably speech and the expression of opinion that cast the government or the war effort in a negative light or interfered with the sale of government bonds...
, and/or the Immigration Act of 1918, approximately 10,000 people were arrested, of which 3,500 were held in detention. Of those held in detention, 556 resident aliens
Resident Aliens
Resident Aliens: Life in the Christian Colony is a 1989 book by Stanley Hauerwas and William Willimon which argues that Christian churches should focus on developing Christian life and community rather than attempting to reform the secular culture...
were eventually deported. The bombing campaign added to the Red Scare of 1919-1920
First Red Scare
In American history, the First Red Scare of 1919–1920 was marked by a widespread fear of Bolshevism and anarchism. Concerns over the effects of radical political agitation in American society and alleged spread in the American labor movement fueled the paranoia that defined the period.The First Red...
, a widespread fear that radicals planned to overthrow the United States government and replace it with a Bolshevist dictatorship like that established by the Russian Revolution.