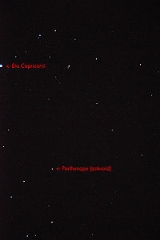 Encyclopedia
11 Parthenope is a large, bright main-belt asteroid
Asteroid
Asteroids are a class of small Solar System bodies in orbit around the Sun. They have also been called planetoids, especially the larger ones...
.

Parthenope was discovered by Annibale de Gasparis
Annibale de Gasparis
Annibale de Gasparis was an Italian astronomer. From 1864 to 1889 he was the director of the Astronomical Observatory of Capodimonte in Naples.He won the Gold Medal of the Royal Astronomical Society in 1851....
on May 11, 1850, the second of his nine asteroid discoveries. It was named after one of the Siren
Siren
In Greek mythology, the Sirens were three dangerous mermaid like creatures, portrayed as seductresses who lured nearby sailors with their enchanting music and voices to shipwreck on the rocky coast of their island. Roman poets placed them on an island called Sirenum scopuli...
s in Greek mythology
Greek mythology
Greek mythology is the body of myths and legends belonging to the ancient Greeks, concerning their gods and heroes, the nature of the world, and the origins and significance of their own cult and ritual practices. They were a part of religion in ancient Greece...
, said to have founded the city of Naples
Naples
Naples is a city in Southern Italy, situated on the country's west coast by the Gulf of Naples. Lying between two notable volcanic regions, Mount Vesuvius and the Phlegraean Fields, it is the capital of the region of Campania and of the province of Naples...
. De Gasparis "used his utmost endeavours to realise a 'Parthenope' in the heavens, such being the name suggested by Sir John Herschel
John Herschel
Sir John Frederick William Herschel, 1st Baronet KH, FRS ,was an English mathematician, astronomer, chemist, and experimental photographer/inventor, who in some years also did valuable botanical work...
on the occasion of the discovery of Hygeia
10 Hygiea
10 Hygiea is an asteroid located in the asteroid belt. With somewhat oblong diameters of 350–500 km, and a mass estimated to be 2.9% of the total mass of the belt, it is the fourth largest asteroid by volume and mass...
in 1849".

There have been two observed Parthenopian occultation
Occultation
An occultation is an event that occurs when one object is hidden by another object that passes between it and the observer. The word is used in astronomy . It can also refer to any situation wherein an object in the foreground blocks from view an object in the background...
s, on February 13, 1987, and April 28, 2006.

On August 6, 2008, during a perihelic
Apsis
An apsis , plural apsides , is the point of greatest or least distance of a body from one of the foci of its elliptical orbit. In modern celestial mechanics this focus is also the center of attraction, which is usually the center of mass of the system...
opposition, Parthenope had an apparent magnitude
Apparent magnitude
The apparent magnitude of a celestial body is a measure of its brightness as seen by an observer on Earth, adjusted to the value it would have in the absence of the atmosphere...
of 8.8.

In 2007, Baer and Chesley calculated a higher mass and density for Parthenope based on perturbations
Perturbation (astronomy)
Perturbation is a term used in astronomy in connection with descriptions of the complex motion of a massive body which is subject to appreciable gravitational effects from more than one other massive body....
by the 90 km asteroid 17 Thetis
17 Thetis
17 Thetis is a large main-belt asteroid. It is an S-type asteroid, therefore giving it a relatively bright silicate surface.It was discovered by R. Luther on April 17, 1852. It was his first asteroid discovery. Its name comes from Thetis, the mother of Achilles in Greek mythology.One Thetidian...
. Baer and Chesley calculated a mass of 6.3 kg with a density of 3.3 g/cm³. 2008 estimates by Baer suggest a mass of 6.15. The 1997 and 2001 estimates by Viateau and Rapaport were closer to 5 kg with a density of 2.7 g/cm³.