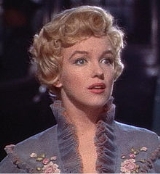 Quotations
Marilyn Monroe was an American actress, singer, model, and one of the most famous Hollywood icons of the twentieth century.