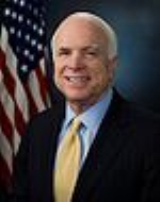 Quotations
John Sidney McCain III (born 29 August 1936) is an American politician. A Republican, McCain has been a U.S. Senator from Arizona since 1987, winning re-election in 1992, 1998, and 2004. He was a presidential candidate in the 2000 election, but was defeated in the Republican primaries by then-Texas Governor and later President George W. Bush.