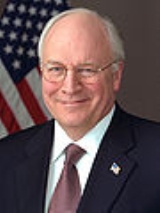 Here's what I can tell you about Donald Rumsfeld|Don Rumsfeld. You're never going to get any credit. And you'll only know how well you're doing if he gives you more work. If that happens, you're doing fine.