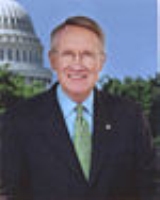 Quotations
Harry Reid is the senior United States Senator from Nevada and a member of the Democratic Party, for which he serves as Senate Majority Leader.