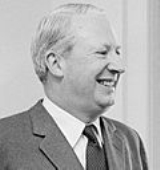 Quotations
Sir Edward Richard George Heath KG MBE (9 July, 1916 – 17 July, 2005) was Prime Minister of the United Kingdom for three and a half years at the beginning of the 1970s. Heath, who was a Conservative, broke with the tradition of upper-class and aristocratic leaders, as the son of a carpenter. Elected as an MP in 1950, he rose through the ministerial ranks during the 1950s and 1960s, winning the leadership of his party in 1965. Despite some personal unpopularity, he unexpectedly won the 1970 general election. In power his government successfully took the United Kingdom into the European Community but suffered economic difficulties and trade union unrest. Seeking to establish a mandate to take on striking miners, Heath called an early general election in 1974 and lost. He was deposed from the leadership by Margaret Thatcher in 1975 and a large part of his subsequent life seemed to be spent complaining about her policies.