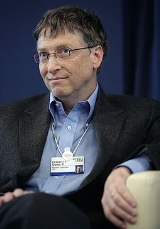 Quotations
William Henry Gates III (born 28 October 1955) is the co-founder and Chairman of Microsoft, and founder of the Bill & Melinda Gates Foundation. Forbes magazine has ranked him as the richest person in the world for twelve consecutive years.

Interview from Programmers at Work (1986)

I've said some stupid things and some wrong things, but not that. No one involved in computers would ever say that a certain amount of memory is enough for all time … I keep bumping into that silly quotation attributed to me that says 640K of memory is enough. There's never a citation; the quotation just floats like a rumor, repeated again and again.
Do you realize the pain the industry went through while the IBM PC was limited to 640K? The machine was going to be 512K at one point, and we kept pushing it up. I never said that statement — I said the opposite of that.