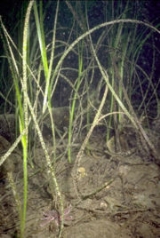 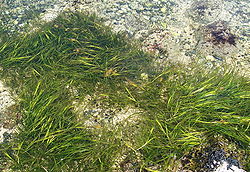 Zostera is a small genus
Genus
In biology, a genus is a low-level taxonomic rank used in the biological classification of living and fossil organisms, which is an example of definition by genus and differentia...
of widely distributed seagrass
Seagrass
Seagrasses are flowering plants from one of four plant families , all in the order Alismatales , which grow in marine, fully saline environments.-Ecology:...
, commonly called marine eelgrass or (outside North America) simply eelgrass (not to be confused with the freshwater plant genus Vallisneria
Vallisneria
Vallisneria is a genus of freshwater aquatic plant, commonly called eelgrass, tape grass or vallis. The genus has 6-10 species that are widely distributed, but do not grow in colder regions....
also called "eelgrass"). The genus Zostera contains sixteen species.

Zostera is found on sandy substrates or in estuaries
Estuary
An estuary is a partly enclosed coastal body of water with one or more rivers or streams flowing into it, and with a free connection to the open sea....
submerged or partially floating. Most Zostera are perennial. They have long, bright green, ribbon-like leaves, about 1 cm wide. Short stems grow up from extensive, white branching rhizome
Rhizome
In botany and dendrology, a rhizome is a characteristically horizontal stem of a plant that is usually found underground, often sending out roots and shoots from its nodes...
s. The flowers are enclosed in the sheaths of the leaf bases, the fruits are bladdery and can float.

Zostera beds are important for sediment deposition, substrate stabilization, as substrate for epiphytic algae
Algae
Algae are a large and diverse group of simple, typically autotrophic organisms, ranging from unicellular to multicellular forms, such as the giant kelps that grow to 65 meters in length. They are photosynthetic like plants, and "simple" because their tissues are not organized into the many...
and micro-invertebrates, and as nursery grounds for many species of economically important fish and shellfish. Zostera often forms beds in bay mud
Bay mud
Bay mud consists of thick deposits of soft, unconsolidated silty clay, which is saturated with water; these soil layers are situated at the bottom of certain estuaries, which are normally in temperate regions that have experienced cyclical glacial cycles...
in the estuarine setting. It is an important food for Brant Geese and Wigeon
Wigeon
The Eurasian Wigeon, also known as Widgeon or Eurasian Widgeon is one of three species of wigeon in the dabbling duck genus Anas. It is common and widespread within its range...
s, and even (occasionally) caterpillar
Caterpillar
Caterpillars are the larval form of members of the order Lepidoptera . They are mostly herbivorous in food habit, although some species are insectivorous. Caterpillars are voracious feeders and many of them are considered to be pests in agriculture...
s of the grass moth Dolicharthria punctalis
Dolicharthria punctalis
The Long-legged China-mark is a species of moth of the family Crambidae. It is the type species of the proposed genus Stenia, which is usually included in Dolicharthria but may be distinct....
.

The slime mold Labyrinthula zosterae can cause wasting disease of Zostera, with Z. marina being particularly susceptible, causing a decrease in the populations of the fauna that depend on Zostera.

Zostera is able to maintain its turgor
Turgor pressure
Turgor Pressure or turgidity is the main pressure of the cell contents against the cell wall in plant cells and bacteria cells, determined by the water content of the vacuole, resulting from osmotic pressure, i.e...
at a constant pressure in response to fluctuations in environmental osmolarity. It achieves this by losing solutes as the tide goes out and gaining solutes as the tide comes in.

Zostera marina
Zostera marina
Zostera marina is a species of seagrass known by the common names common eelgrass and seawrack. It is an aquatic plant native to marine environments on the coastlines of mostly northern sections of North America and Eurasia. It is the most wide-ranging marine flowering plant in the Northern...
is widespread throughout northern areas of the Northern Hemisphere. It and Zostera noltii have both been recorded from Lough Foyle
Lough Foyle
Lough Foyle, sometimes Loch Foyle , is the estuary of the River Foyle in Ulster. It starts where the Foyle leaves Derry. It separates the Inishowen Peninsula in County Donegal, Republic of Ireland from County Londonderry in Northern Ireland.-Transport:...
, Northern Ireland
Northern Ireland
Northern Ireland is one of the four countries of the United Kingdom. Situated in the north-east of the island of Ireland, it shares a border with the Republic of Ireland to the south and west...
.

There are currently 16 species of Zostera, including four species formerly classified in the genus Heterozostera (now a subgenus):

Eelgrass has been used for food by the Seri tribe of Native Americans
Indigenous peoples of the Americas
The indigenous peoples of the Americas are the pre-Columbian inhabitants of North and South America, their descendants and other ethnic groups who are identified with those peoples. Indigenous peoples are known in Canada as Aboriginal peoples, and in the United States as Native Americans...
on the coast of Sonora
Sonora
Sonora officially Estado Libre y Soberano de Sonora is one of the 31 states which, with the Federal District, comprise the 32 Federal Entities of Mexico. It is divided into 72 municipalities; the capital city is Hermosillo....
, Mexico
Mexico
The United Mexican States , commonly known as Mexico , is a federal constitutional republic in North America. It is bordered on the north by the United States; on the south and west by the Pacific Ocean; on the southeast by Guatemala, Belize, and the Caribbean Sea; and on the east by the Gulf of...
. The rhizomes and leaf-bases of eelgrass were eaten fresh or dried into cakes for winter food. It was also used for smoking deer
Deer
Deer are the ruminant mammals forming the family Cervidae. Species in the Cervidae family include white-tailed deer, elk, moose, red deer, reindeer, fallow deer, roe deer and chital. Male deer of all species and female reindeer grow and shed new antlers each year...
meat. The Seri language
Seri language
Seri is a language isolate spoken by the Seri people by between 716 and 900 people in two villages on the coast of Sonora, Mexico.-Classification:...
has many words related to eelgrass and eelgrass-harvesting. The month of April is called xnoois ihaat iizax, literally "the month when the eelgrass seed is mature".

Eelgrass once grew in abundance in Barnegat Bay
Barnegat Bay
Barnegat Bay is a small brackish arm of the Atlantic Ocean, approximately 30 miles long, along the coast of Ocean County, New Jersey in the United States. It is a long barrier peninsula, as well as by the north end of Long Beach Island...
, New Jersey, where it was harvested, dried and used for insulation in houses, such as the governor's summer mansion in Island Beach State Park
Island Beach State Park
Island Beach State Park is a New Jersey state park located just south of Seaside Park on the Barnegat Peninsula in Berkeley Township, Ocean County, New Jersey, United States. The park is operated and maintained by the New Jersey Division of Parks and Forestry...
. A blight decimated the eelgrass, which ended harvesting of the plant. The plant is making a gradual comeback.

Zostera has also been used as packing material and as stuffing for mattresses and cushions.