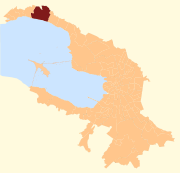 Vladimir Lenin
Vladimir Lenin
Vladimir Ilyich Lenin was a Russian Marxist revolutionary and communist politician who led the October Revolution of 1917. As leader of the Bolsheviks, he headed the Soviet state during its initial years , as it fought to establish control of Russia in the Russian Civil War and worked to create a...
managed to travel over the border in secrecy to Finland in 1907. Later on 3 April 1917, he returned through the Terijoki border control disguised as a heater of a Finnish Railways - Finlyandsky Rail Terminal locomotive
Locomotive
A locomotive is a railway vehicle that provides the motive power for a train. The word originates from the Latin loco – "from a place", ablative of locus, "place" + Medieval Latin motivus, "causing motion", and is a shortened form of the term locomotive engine, first used in the early 19th...
.

With completion of the Riihimäki-St. Petersburg railroad in 1870, Terijoki become a popular summer resort, and was frequented by St. Petersburg's upper class until closure of the border during the Russian Revolution (1917).

When the Republic of Finland
Finland
Finland , officially the Republic of Finland, is a Nordic country situated in the Fennoscandian region of Northern Europe. It is bordered by Sweden in the west, Norway in the north and Russia in the east, while Estonia lies to its south across the Gulf of Finland.Around 5.4 million people reside...
gained independence on 6 December 1917, Terijoki became a part of it, and remained so until it was occupied by the Soviet Union
Soviet Union
The Soviet Union , officially the Union of Soviet Socialist Republics , was a constitutionally socialist state that existed in Eurasia between 1922 and 1991....
during the Winter War
Winter War
The Winter War was a military conflict between the Soviet Union and Finland. It began with a Soviet offensive on 30 November 1939 – three months after the start of World War II and the Soviet invasion of Poland – and ended on 13 March 1940 with the Moscow Peace Treaty...
(1939-1940). It was regained by Finland in 1941 during the Continuation War
Continuation War
The Continuation War was the second of two wars fought between Finland and the Soviet Union during World War II.At the time of the war, the Finnish side used the name to make clear its perceived relationship to the preceding Winter War...
(1941-1944), but then was then occupied again by the Red Army
Red Army
The Workers' and Peasants' Red Army started out as the Soviet Union's revolutionary communist combat groups during the Russian Civil War of 1918-1922. It grew into the national army of the Soviet Union. By the 1930s the Red Army was among the largest armies in history.The "Red Army" name refers to...
during the later stages of the same war and anexed to the Soviet Union in 1944.

After the Second World War its original Finnish population was displaced by people moved from Russia. At the turn of the century, the town's population was estimated to have been a few thousand, rising to above 50,000 in summer.

As of the beginning of the 21st century Zelenogorsk is actively developing in many directions. Various actions for improvement of quality of life and rest in Zelenogorsk have been carried out.

July 25 is the date of the annually celebrated City Day. On this day in 2009 a fountain was opened in the central square of the city park, and a sculpture named "Boots of the Traveller" was solemnly unveiled along the central avenue.

At the Dachshund monument, parades of dachshund
Dachshund
The dachshund is a short-legged, long-bodied dog breed belonging to the hound family. The standard size dachshund was bred to scent, chase, and flush out badgers and other burrow-dwelling animals, while the miniature dachshund was developed to hunt smaller prey such as rabbits...
s have been held, and the museum of vintage vehicles has gained additional new exhibits.

At a concert in honor of City Day in 2009, known musicians, such as Music hall theatre of St. Petersburg, Edita Piekha
Edita Piekha
Edita Piekha is a French-born popular Soviet and Russian singer and actress of Polish descent. She was the third popular female singer, after Klavdiya Shulzhenko and Sofia Rotaru, to be named a People's Artist of the USSR ....
, and others, performed.