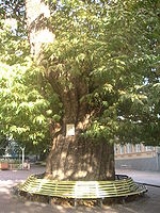 Encyclopedia
Zaqatala ; is a city in northwest Azerbaijan
Azerbaijan
Azerbaijan , officially the Republic of Azerbaijan is the largest country in the Caucasus region of Eurasia. Located at the crossroads of Western Asia and Eastern Europe, it is bounded by the Caspian Sea to the east, Russia to the north, Georgia to the northwest, Armenia to the west, and Iran to...
. With a municipal population of 31,300 inhabitants, it is located northwest of Sheki, by the Tala River and is the main municipality of the Zaqatala rayon
Zaqatala (rayon)
Zaqatala is a rayon of Azerbaijan. The capital and principal town of the rayon is Zaqatala. The rayon is an appendix of Azeri territory wedged between Georgia and Dagestan...
. The municipality consists of the city of Zaqatala and the nearby village of Qazangül
Qazangül
Qazangül is a village in the municipality of Zaqatala in the Zaqatala Rayon of Azerbaijan....
. 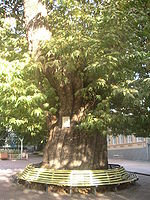 Zaqatala has several sites of historic significance, most of which are centered on its 19th century town centre. The main square, formerly called Lenin Square, features a pair of 700 year old plane trees
Platanus
Platanus is a small genus of trees native to the Northern Hemisphere. They are the sole living members of the family Platanaceae....
.

The city's most prominent feature is a ruined fortress, built in the 1830s by occupying Russian
Russian Empire
The Russian Empire was a state that existed from 1721 until the Russian Revolution of 1917. It was the successor to the Tsardom of Russia and the predecessor of the Soviet Union...
forces during the Caucasian War
Caucasian War
The Caucasian War of 1817–1864, also known as the Russian conquest of the Caucasus was an invasion of the Caucasus by the Russian Empire which ended with the annexation of the areas of the North Caucasus to Russia...
to defend the city from rebels. In the 1850s, the town was the site of battles between Russians and Dagestani leader Imam Shamil
Imam Shamil
Imam Shamil also spelled Shamyl, Schamil, Schamyl or Shameel was an Avar political and religious leader of the Muslim tribes of the Northern Caucasus...
.

In the 20th century the town and its fortress became more famous when the fortress was used as one of the prisons for the mutinous crew of the battleship Potëmkin
Russian battleship Potemkin
The Potemkin was a pre-dreadnought battleship of the Imperial Russian Navy's Black Sea Fleet. The ship was made famous by the Battleship Potemkin uprising, a rebellion of the crew against their oppressive officers in June 1905...
, whose actions in the failed 1905 Revolution were a precursor to the eventual 1917 revolution. The statue of one of the mutineers erected in the Soviet
Soviet Union
The Soviet Union , officially the Union of Soviet Socialist Republics , was a constitutionally socialist state that existed in Eurasia between 1922 and 1991....
era still decorates Heydar Aliyev
Heydar Aliyev
Heydar Alirza oglu Aliyev , also spelled as Heidar Aliev, Geidar Aliev, Haydar Aliyev, Geydar Aliyev was the third President of Azerbaijan for the New Azerbaijan Party from June 1993 to October 2003, when his son Ilham Aliyev succeeded him.From 1969 till 1982, Aliyev was also the leader of Soviet...
park not far from the fortress. Currently, the fortress still houses a military garrison
Army of Azerbaijan
The Azerbaijani Land Forces are the land force component of the Azerbaijani Armed Forces.Since the fall of the Soviet Union, Azerbaijan has been trying to further develop its armed forces into a professional, well trained, and mobile military. Based on 2007 statistics the country has about 56,840...
as well as several Soviet-style apartment buildings
Microdistrict
Microdistrict, or microraion , is a residential complex—a primary structural element of the residential area construction in the Soviet Union and in some post-Soviet and former Communist states...
. Near the northern part of the ramparts and off of the main square is a beautiful, but abandoned, Georgian church. The town now sports a sizable new mosque
Mosque
A mosque is a place of worship for followers of Islam. The word is likely to have entered the English language through French , from Portuguese , from Spanish , and from Berber , ultimately originating in — . The Arabic word masjid literally means a place of prostration...
.

It is served by the A315 road coming from Mingachevir
Mingachevir
Mingachevir , sometimes spelled Mingecevir, is the fourth-biggest city in Azerbaijan with a population of about 100,000. It is known as city of lights because of its hydroelectric power station on the Kur River, which splits the city in half....
and leading to the Georgian border at Lagodekhi
Lagodekhi
Lagodekhi is a small town and district in the Kakheti region of eastern Georgia. There is a border crossing there leading to Azerbaijan's Balakan Province.Lagodekhi Nature Reserve, established in 1911, is situated in this area.-External links:***...
as well as by a small airfield. 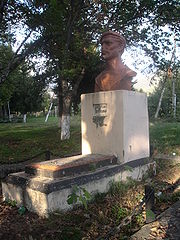 There are several hotels in both Zaqatala and surrounding villages including Ashghi Tala and Jar (also spelled Car/Djari), both about 3 kilometres (1.9 mi) from Zaqatala. 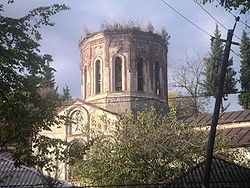 Azerbaijanis
Azerbaijani people
The Azerbaijanis are a Turkic-speaking people living mainly in northwestern Iran and the Republic of Azerbaijan, as well as in the neighbourhood states, Georgia, Russia and formerly Armenia. Commonly referred to as Azeris or Azerbaijani Turks , they also live in a wider area from the Caucasus to...
, Avars
Caucasian Avars
Avars or Caucasian Avars are a modern people of Caucasus, mainly of Dagestan, in which they are the predominant group. The Caucasian Avar language belongs to the Northeast Caucasian language family ....
, Lezgins
Lezgins
The Lezgians are an ethnic group living predominantly in southern Dagestan and northeastern Azerbaijan and who speak the Lezgian language.- Historical concept :While ancient Greek historians, including Herodotus, Strabo, and Pliny the Elder, referred...
, and Tsakhurs inhabit Zaqatala and the surrounding rayon
Zaqatala (rayon)
Zaqatala is a rayon of Azerbaijan. The capital and principal town of the rayon is Zaqatala. The rayon is an appendix of Azeri territory wedged between Georgia and Dagestan...
. In addition to the Azeri population, which is the majority here and in most of the rest of Azerbaijan, communities of Dagestan
Dagestan
The Republic of Dagestan is a federal subject of Russia, located in the North Caucasus region. Its capital and the largest city is Makhachkala, located at the center of Dagestan on the Caspian Sea...
i peoples, including the Avars, Tsakhurs, and Lezgins, live in the area.
The source of this article is wikipedia, the free encyclopedia.  The text of this article is licensed under the GFDL.