Encyclopedia
Yilan County is a county of central Heilongjiang
Heilongjiang
For the river known in Mandarin as Heilong Jiang, see Amur River' is a province of the People's Republic of China located in the northeastern part of the country. "Heilongjiang" literally means Black Dragon River, which is the Chinese name for the Amur. The one-character abbreviation is 黑...
province in Northeast China
Northeast China
Northeast China, historically known in English as Manchuria, is a geographical region of China, consisting of the three provinces of Liaoning, Jilin and Heilongjiang. The region is sometimes called the Three Northeast Provinces...
. It administratively belonging to Harbin
Harbin
Harbin ; Manchu language: , Harbin; Russian: Харби́н Kharbin ), is the capital and largest city of Heilongjiang Province in Northeast China, lying on the southern bank of the Songhua River...
, the provincial capital, more than 240 kilometres (149.1 mi) to the west. Its county seat, which is also called Yilan (Yilan Town, Yilan zhen), is located near the fall of the Mudan River (formerly known as the Hurka River) into the Sungari. 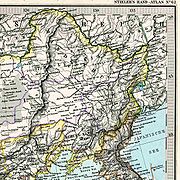 The town retained its importance into the Qing
Qing Dynasty
The Qing Dynasty was the last dynasty of China, ruling from 1644 to 1912 with a brief, abortive restoration in 1917. It was preceded by the Ming Dynasty and followed by the Republic of China....
period, and in 1692 became the seat of a Deputy Lieutenant-General (副都统, fu dutong). Subordinated to the Governor General (jiangjun) in Jilin City
Jilin City
Jilin City is the second largest city of Jilin province in Northeast China. At the 2010 census, 4,414,681 people resided within its administrative area of and 1,975,803 in its built up area...
. the Sanxing Fu dutong was in control of the northeastern section of the Jilin
Jilin
Jilin , is a province of the People's Republic of China located in the northeastern part of the country. Jilin borders North Korea and Russia to the east, Heilongjiang to the north, Liaoning to the south, and Inner Mongolia to the west...
Province (which in those days was much larger than now) - a large region stretching northeast along the Sungari and the Amur to the Pacific Ocean.

According to a British traveler who visited Sanxing in the late 1880s century, the town had the population of around 10,000, trade in furs and fish (salmon and sturgeon) being its main industries.