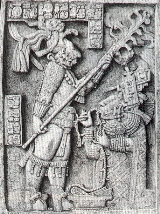 Encyclopedia
Lintel 24 is the designation given by modern archaeologists to an ancient Maya
Maya civilization
The Maya is a Mesoamerican civilization, noted for the only known fully developed written language of the pre-Columbian Americas, as well as for its art, architecture, and mathematical and astronomical systems. Initially established during the Pre-Classic period The Maya is a Mesoamerican...
limestone carving from Yaxchilan
Yaxchilan
Yaxchilan is an ancient Maya city located on the bank of the Usumacinta River in what is now the state of Chiapas, Mexico. In the Late Classic Period Yaxchilan was one of the most powerful Maya states along the course of the Usumacinta, with Piedras Negras as its major rival...
, in modern Chiapas
Chiapas
Chiapas officially Estado Libre y Soberano de Chiapas is one of the 31 states that, with the Federal District, comprise the 32 Federal Entities of Mexico. It is divided in 118 municipalities and its capital city is Tuxtla Gutierrez. Other important cites in Chiapas include San Cristóbal de las...
, Mexico
Mexico
The United Mexican States , commonly known as Mexico , is a federal constitutional republic in North America. It is bordered on the north by the United States; on the south and west by the Pacific Ocean; on the southeast by Guatemala, Belize, and the Caribbean Sea; and on the east by the Gulf of...
. The lintel dates to about AD 725
725
Year 725 was a common year starting on Monday of the Julian calendar. The denomination 725 for this year has been used since the early medieval period, when the Anno Domini calendar era became the prevalent method in Europe for naming years.- Europe :* Bede writes On the reckoning of time ...
, placing it within the Maya Late Classic period
Mesoamerican chronology
Mesoamerican chronology divides the history of pre-Columbian Mesoamerica into several periods: the Paleo-Indian , the Archaic , the Preclassic , the Classic , and the Postclassic...
. The text of Maya hieroglyphics indicates that the scene depicted is a bloodletting ritual that took place on long count date 9.13.17.15.12 5 Eb 15 Mac, or October 28, AD 709. The ruler, Shield Jaguar, holds a torch while his consort, Lady Xoc
Lady Xoc
Lady K'ab'al Xook or Lady Xoc was a Maya Queen consort in Yaxchilan and is considered to have been one of the most powerful and prominent women in Maya civilization. She was the principal wife of King Itzamnaaj Bahlam III Shield Jaguar the Great who ruled Yaxchilan from AD 681 to 742. Lady Xoc is...
, pulls a rope studded with what are now believed to be obsidian
Obsidian
Obsidian is a naturally occurring volcanic glass formed as an extrusive igneous rock.It is produced when felsic lava extruded from a volcano cools rapidly with minimum crystal growth...
shards through her tongue in order to conjure a vision serpent
Vision Serpent
The Vision Serpent is an important creature in Pre-Columbian Maya mythology, although the term itself is now slowly becoming outdated.The serpent was a very important social and religious symbol, revered by the Maya. Maya mythology describes serpents as being the vehicles by which celestial bodies,...
.

Lintel 24 was found in its original context alongside Lintels 25 and 26 in Structure 23 of Yaxchilan. Alfred Maudslay
Alfred Maudslay
Alfred Percival Maudslay was a British colonial diplomat, explorer and archaeologist. He was one of the first Europeans to study Mayan ruins....
had the lintel cut from the ceiling of a side entrance in 1882 and shipped to Great Britain where it remains today in the British Museum
British Museum
The British Museum is a museum of human history and culture in London. Its collections, which number more than seven million objects, are amongst the largest and most comprehensive in the world and originate from all continents, illustrating and documenting the story of human culture from its...
of London
London
London is the capital city of :England and the :United Kingdom, the largest metropolitan area in the United Kingdom, and the largest urban zone in the European Union by most measures. Located on the River Thames, London has been a major settlement for two millennia, its history going back to its...
. Lintel 25 made the journey in 1883. Lintel 26 was discovered in 1897 by Teobert Maler. It was removed to the Museo Nacional de Antropología e Historia in 1964. Structure 33 has since collapsed.

“The text consists of two sentences, one relating to Shield Jaguar, the other to his wife. The first three glyphs record the date and the event, “he is letting blood,” with additional glyphs apparently specifying the particular ritual context. Shield Jaguar’s name begins at E2b, with a title telling us he was a “4-Katun ahpo”--- that he had lived into his fourth katun, at the time of the event. His personal name consists of a shield sitting atop a jaguar head. The name phrase concludes by naming him “the captor of Ah-Ahaual” and “a blood lord of Yaxchilan.” The actions of the woman are recorded in the smaller frame behind Shield Jaguar… The last three glyphs record her name phrase.” 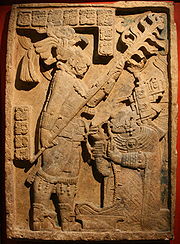 The lintel is done in high relief style with the background deeply recessed. All three were apparently commissioned by Lady Xoc for the doorways of Structure 23. The lintels show the elaborate costumes of the king and queen with remarkable detail and with an uncharacteristic lack of abstraction. These lintels are considered by some to be the pinnacle of Mayan Art. We are able to study the detail of Mayan weaving as depicted in these carvings, and see the pearls woven into the fabric. Subtle differences in the three lintels suggest that the compositions were completed by two or three different artists. Each of the works is signed, indicating that the production of such works was regarded as a highly specialized skill rather than a trade.

Shield Jaguar was a central figure in directing the course of Yaxchilan. Shield Jaguar ascended to power in AD 681 and died in AD 742. There are numerous documented references to him on artifacts at the end of Stage V at Yaxchilan. In Lintel 24, he is depicted holding a torch above his first wife, Lady Xoc. The king is wearing his hair back with quetzal feathers indicating that he will also let blood in this ceremony. Attached to his head band is what appears to be a representation of the Jester Mask. The jester mask is considered analogous to the glyph for kingship, ajaw, and is named so for the vegetation often depicted coming from the crown of it. Since the rest of the costume is depicted without much abstraction, it is suggested that Maya kings may have literally attached a shrunken head to their head band as a representation of power. He is shown wearing a pectoral with a representation of the sun god depicted. It is strung from a jade bead necklace that is counter balanced by a long strand of jade beads and what are probably carved shells going down his back. The artist was careful to show such minute details as the strings that are tied to hold on the wrist cuffs worn by both royals, and the pattern woven on Shield Jaguar’s beautiful cape.

Lady Xoc is one of the most prominent and probably politically powerful women in the Maya civilization. Lady Xoc is shown here performing an important royal rite of blood letting. By pulling the rope studded with obsidian shards through her tongue, she causes blood to drip onto paper strips held in a woven basket to be burned as depicted on Lintel 25. Blood
Blood
Blood is a specialized bodily fluid in animals that delivers necessary substances such as nutrients and oxygen to the cells and transports metabolic waste products away from those same cells....
scrolls can be seen on her face. The queen also wears an elaborate headdress. There are flower tassels on the main part of the head band and a mosaic depiction of Tlaloc
Tlaloc
Tlaloc was an important deity in Aztec religion, a god of rain, fertility, and water. He was a beneficent god who gave life and sustenance, but he was also feared for his ability to send hail, thunder and lightning, and for being the lord of the powerful element of water. In Aztec iconography he...
sprouting quetzal feathers. Her elaborately carved huipil
Huipíl
A huipil is a form of Maya textile and tunic or blouse worn by indigenous Mayan, Zapotec, and other women in central to southern Mexico, Guatemala, Belize, El Salvador, and western Honduras, in the northern part of Central America. Some are also worn by men, particularly in Guatemala...
is trimmed with fringe and pearls. Her necklace also appears to have a pectoral depiction of the sun god. It is probably made of shell or jade plaques, as are her wrist cuffs.

Recent excavations have unearthed what is thought to be the tombs of Shield Jaguar and Lady Xoc within Structure 23. Discovered in association with the female burial attributed to Lady Xoc were 146 prismatic obsidian blades, each with two lateral notches on the edges. These were located in what is known as Element 21 in Room 1 of Structure 23 at Yaxchilan. Due to the association with Lady Xoc’s burial in Room 2, these have been interpreted as being depicted on Lintel 24. The original interpretation of the studded rope was that there were thorns attached, but this new evidence in context has caused the interpretation to shift. We now know that it was a rope studded with obsidian blades used in the ritual, and may have the very physical shards depicted themselves. Lady Xoc’s burial is known as Tomb 3. Shield Jaguar’s remains lay not far, in Room 3. This is referred to as Tomb 2. Elaborate grave goods were found in association with both burials.
The source of this article is wikipedia, the free encyclopedia.  The text of this article is licensed under the GFDL.