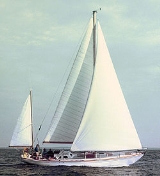 Overview
A yawl is a two-masted sailing craft similar to a sloop
Sloop
A sloop is a sail boat with a fore-and-aft rig and a single mast farther forward than the mast of a cutter....
or cutter but with an additional mast (mizzenmast or mizzen mast) located well aft of the main mast, often right on the transom
Transom (nautical)
In naval architecture, a transom is the surface that forms the stern of a vessel. Transoms may be flat or curved and they may be vertical, raked forward, also known as a retroussé or reverse transom, angling forward from the waterline to the deck, or raked aft, often simply called "raked", angling...
, specifically aft of the rudder post. (A vessel with the mizzenmast located forward of the rudderpost is called a ketch
Ketch
A ketch is a sailing craft with two masts: a main mast, and a shorter mizzen mast abaft of the main mast, but forward of the rudder post. Both masts are rigged mainly fore-and-aft. From one to three jibs may be carried forward of the main mast when going to windward...
. See further discussion below.) A mizzen sail
Sail
A sail is any type of surface intended to move a vessel, vehicle or rotor by being placed in a wind—in essence a propulsion wing. Sails are used in sailing.-History of sails:...
(smaller than the mainsail
Mainsail
A mainsail is a sail located behind the main mast of a sailing vessel.On a square rigged vessel, it is the lowest and largest sail on the main mast....
) is hoisted on the mizzen mast.

The yawl was originally developed as a rig for commercial fishing boats, one good example of this being the Salcombe Yawl
Salcombe Yawl
The Salcombe Yawl is a small sailing dinghy restricted class native to Salcombe in South Devon. It is about the size of a Merlin Rocket, that is and about 180 have been built of which 80% are still in use. It is build traditionally by hand from mahogany, and is clinker built. The centre plate is...
(a small traditional fishing boat built in Devon
Devon
Devon is a large county in southwestern England. The county is sometimes referred to as Devonshire, although the term is rarely used inside the county itself as the county has never been officially "shired", it often indicates a traditional or historical context.The county shares borders with...
).

How do I calculate the CE for a Yawl?
More
x