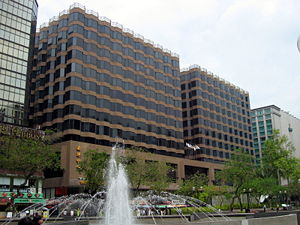 Yau Tsim Mong District ' onMouseout='HidePop("65408")' href="/topics/Jyutping">Jyutping
Jyutping
Jyutping is a romanization system for Cantonese developed by the Linguistic Society of Hong Kong in 1993. Its formal name is The Linguistic Society of Hong Kong Cantonese Romanization Scheme...
: jau4 zim1 wong6 keoi1) is one of 18 districts
Districts of Hong Kong
The Districts of Hong Kong are the 18 political areas by which Hong Kong is geographically divided. Each district has a district council, which was formerly known as a district board. The districts were established in the early 1980s, when Hong Kong was under British rule...
of Hong Kong
Hong Kong
Hong Kong is one of two Special Administrative Regions of the People's Republic of China , the other being Macau. A city-state situated on China's south coast and enclosed by the Pearl River Delta and South China Sea, it is renowned for its expansive skyline and deep natural harbour...
, located on western Kowloon
Kowloon
Kowloon is an urban area in Hong Kong comprising the Kowloon Peninsula and New Kowloon. It is bordered by the Lei Yue Mun strait in the east, Mei Foo Sun Chuen and Stonecutter's Island in the west, Tate's Cairn and Lion Rock in the north, and Victoria Harbour in the south. It had a population of...
peninsula. It is the core urban area of Kowloon. The district has the third highest population density of all districts. The 2006 By-Census
Census in Hong Kong
Population census in Hong Kong , a collection of demographic data in Hong Kong, is conducted by Census and Statistics Department of Hong Kong Government. The census was held every ten years and by-census is held between two census...
recorded the total population of Yau Tsim Mong District at 280,548.


Areas within the district include