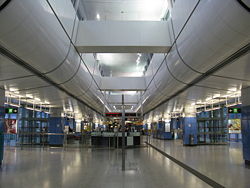 Olympic Station is a station on the Tung Chung Line of Hong Kong
Hong Kong
Hong Kong is one of two Special Administrative Regions of the People's Republic of China , the other being Macau. A city-state situated on China's south coast and enclosed by the Pearl River Delta and South China Sea, it is renowned for its expansive skyline and deep natural harbour...
's MTR
MTR
Mass Transit Railway is the rapid transit railway system in Hong Kong. Originally opened in 1979, the system now includes 211.6 km of rail with 155 stations, including 86 railway stations and 69 light rail stops...
. The livery is dodger blue.

Although both platforms are parallel to each other on ground level, they do not share the same island platform due to the Airport Express Trains running through the middle of the station.

It is interesting to note that, with the exception of transfer to buses, Olympic station is the only station along the Tung Chung Line that does not have a transfer point to other routes in the MTR system (Tung Chung being to transfer to the Ngong Ping 360 cable cars)

All exits are reached by pedestrian footbridges reaching out to all directions from the concourse, built in a rectangular box in the middle of the West Kowloon Highway.