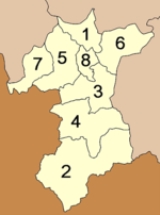 The name Yala is actually the Thai
Thai language
Thai , also known as Central Thai and Siamese, is the national and official language of Thailand and the native language of the Thai people, Thailand's dominant ethnic group. Thai is a member of the Tai group of the Tai–Kadai language family. Historical linguists have been unable to definitively...
transliteration of Jala (Jawi: جال), its original Malay
Malay language
Malay is a major language of the Austronesian family. It is the official language of Malaysia , Indonesia , Brunei and Singapore...
name means 'net'. The province is also known as Jolor (Jawi: جولور) in Patani Malay language.

Historically Pattani Province was the centre of the semi-independent Malay
Malay people
Malays are an ethnic group of Austronesian people predominantly inhabiting the Malay Peninsula, including the southernmost parts of Thailand, the east coast of Sumatra, the coast of Borneo, and the smaller islands which lie between these locations...
Sultanate of Patani, but paying tribute to the Thai kingdoms of Sukhothai
Sukhothai kingdom
The Sukhothai Kingdom ) was an early kingdom in the area around the city Sukhothai, in north central Thailand. The Kingdom existed from 1238 till 1438...
and Ayutthaya
Ayutthaya kingdom
Ayutthaya was a Siamese kingdom that existed from 1350 to 1767. Ayutthaya was friendly towards foreign traders, including the Chinese, Vietnamese , Indians, Japanese and Persians, and later the Portuguese, Spanish, Dutch and French, permitting them to set up villages outside the walls of the...
. After Ayutthaya fell in to the Burmese in 1767, the Sultanate of Patani gained full independence but under King Rama I (reigned 1782–1809) again came under Siam's control.

In 1909, it was annexed by Siam as part of Anglo-Siamese Treaty of 1909
Anglo-Siamese Treaty of 1909
The Anglo-Siamese Treaty of 1909 or Bangkok Treaty of 1909 was a treaty between the United Kingdom and the Kingdom of Siam signed on March 10, 1909, in Bangkok. Ratifications were exchanged in London on July 9, 1909....
negotiated with the British Empire
British Empire
The British Empire comprised the dominions, colonies, protectorates, mandates and other territories ruled or administered by the United Kingdom. It originated with the overseas colonies and trading posts established by England in the late 16th and early 17th centuries. At its height, it was the...
. Along with Narathiwat, Yala was originally part of Pattani Province but they were split off and became provinces of their own. There is a separatist movement in Yala, which after being dormant for many years erupted again in 2004. The British
United Kingdom
The United Kingdom of Great Britain and Northern IrelandIn the United Kingdom and Dependencies, other languages have been officially recognised as legitimate autochthonous languages under the European Charter for Regional or Minority Languages...
Foreign and Commonwealth Office
Foreign and Commonwealth Office
The Foreign and Commonwealth Office, commonly called the Foreign Office or the FCO is a British government department responsible for promoting the interests of the United Kingdom overseas, created in 1968 by merging the Foreign Office and the Commonwealth Office.The head of the FCO is the...
advises against all but essential travel in the province.

Yala is one of the four provinces of Thailand with a Muslim
Muslim
A Muslim, also spelled Moslem, is an adherent of Islam, a monotheistic, Abrahamic religion based on the Quran, which Muslims consider the verbatim word of God as revealed to prophet Muhammad. "Muslim" is the Arabic term for "submitter" .Muslims believe that God is one and incomparable...
majority. About 72% are Malay
Malay language
Malay is a major language of the Austronesian family. It is the official language of Malaysia , Indonesia , Brunei and Singapore...
speaking Muslims. The remainder are Thai
Thai people
The Thai people, or Siamese, are the main ethnic group of Thailand and are part of the larger Tai ethnolinguistic peoples found in Thailand and adjacent countries in Southeast Asia as well as southern China. Their language is the Thai language, which is classified as part of the Kradai family of...
and Thai Chinese
Thai Chinese
The Thai Chinese are an overseas Chinese community who live in Thailand. Thailand is home to the largest, oldest, most prominent, and most integrated overseas Chinese community in the world with a population of approximately 9.5 million people...
Buddhists.

The provincial seal
Seals of The Provinces of Thailand
-Present-day provinces of Thailand:This list includes all the seals of the Provinces of Thailand. It also includes the special administrative area of the capital, Bangkok.-Former Provinces:-External links:*...
shows a miner with simple mining tools including hoes, crowbars, and baskets. Yala was originally a mining town with tin
Tin
Tin is a chemical element with the symbol Sn and atomic number 50. It is a main group metal in group 14 of the periodic table. Tin shows chemical similarity to both neighboring group 14 elements, germanium and lead and has two possible oxidation states, +2 and the slightly more stable +4...
and tungsten
Tungsten
Tungsten , also known as wolfram , is a chemical element with the chemical symbol W and atomic number 74.A hard, rare metal under standard conditions when uncombined, tungsten is found naturally on Earth only in chemical compounds. It was identified as a new element in 1781, and first isolated as...
ores. 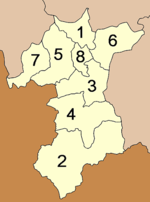 Yala Central Mosque (มัสยิดกลางจังหวัดยะลา) is the main mosque of the province in western architectural style intertwined with the unique mosque frame. The front has about 30 wide steps leading to the upper terrace.

Sanam Chang Phueak Park (สวนสาธารณะสนามช้างเผือก) It was used as the ground to give the King a white elephant (chang phueak) named “Phra Sawet Sura Khachathan”. The Park has a pavilion in the middle of a large pond and various sculpture of animals.

Suan Khwan Mueang (สวนขวัญเมือง) Its vast area of 207 rai has a separate sportsground and a 69 rai pond, landscaped with sandy beach and sea pines to remedy the landlocked problem of the province

Wat Khuhaphimuk or Wat Na Tham (พระพุทธไสยาสน์วัดคูหาภิมุขหรือวัดหน้าถ้ำ) is one of the three most revered places of the south. A figure of a giant, made in B.E. 2484 and named by the villagers as “Chao Khao”, protects the entrance of the cave that houses the reclining Buddha. Inside the cave is a large chamber that has been converted into a religious area.

Tham Mae Nang Montho (ถ้ำแม่นางมณโฑ) Inside the cave are large connecting chambers that are mostly dark. A torch is highly recommended. The highlight of this place is at the end of the cave with a large stalagmite resembling the shape of a meditating lady, hence the name of the cave.

Tham Sin (ถ้ำศิลป์) This is a very small and dark cave with ancient mural of different postures of the Lord Buddha and a painting of three women standing together on the cave wall that has deteriorated with time. A torch or a lamp is highly recommended to view the mural and the cave itself.

Namtok La-ong Rung (Rainbow Waterfall) (น้ำตกละอองรุ้ง) The slippery trek leads along the stream from the waterfall calls for precaution. During the rainy season, the waterfall has the effect of the rainbow, hence the name.

Sakai Village (หมู่บ้านซาไก) The Sakai is an ancient nomad tribe who exists on hunting and gathering, is an expert on herbal plants and using darts for hunting. Recently the Department of Social Work has developed the village by segregating the Sakai in one area and introduced rubber planting as their occupation.

Namtok Bu Ke Pilo or Namtok Tawan Ratsami (น้ำตกบูเก๊ะปิโลหรือน้ำตกตะวันรัศมี) is about 19 kilometres from Amphoe Mueang. The entrance to the waterfall is about 500 metres from the village. This waterfall is different from other waterfalls in that when sunlight shines onto the water, it will affect the color of the underwater rocks—they all turn beautiful yellow.

Betong (เบตง) is Malay, meaning “bamboo”. This district is at the southernmost point of Thailand. The Betong city centre is surrounded by mountains, resulting in cool climate and high rainfall with frequent fog in the morning. It is therefore dubbed “The City in the Fog with Beautiful Flowers”. .

Phra Mahathat Chedi Phra Phutthathammaprakat (พระมหาธาตุเจดีย์พระพุทธธรรมประกาศ) This chedi is built in the modern Sivijaya style, covered in gold color. It is 39.9 metres high, built to commemorate the 69th birthday anniversary of Her Majesty the Queen.

Suan Sut Sayam (Betong Municipality Park) (สวนสุดสยาม) It is the overlook for the city, consisting of ornamental plants and flowering plants garden, avarium, health garden, a sportsground, a swimming pool, and a playground.

The Largest Mail Box in Thailand (ตู้ไปรษณีย์ใหญ่ที่สุดในประเทศไทย) It was built in B.E. 2467 before World War II as the communication post for the townspeople, through the radio implanted on top of the box, and the mail slot below it. At present a new box had been built in a larger size (nine metres tall), and is located at the City Convention Hall (Sala Prachakhom).

The Swift (นกนางแอ่น): at dusk the swifts would fly about the city centre and come to rest at houses, on buildings and on electricity lines, especially on the Bell Tower that is well lit at night. They have become one of Betong’s symbols.

Namtok Inthason (น้ำตกอินทสร) is about 15 kilometres from Betong city centre, or about two kilometres further from the Hot Spring.

Piyamit Tunnel (อุโมงค์ปิยะมิตร) The tunnel was built in three months in B.E. 2519, winding through the mountain for about one kilometre, about 50–60 feet wide with multiple entrances. It was used as the air raid shelter and food storage area. At present there is an exhibition about its history including the way of life in the forest.

Bala-Hala Forest (ป่าบาลา-ฮาลา) or Suan Pa Phra Namaphithai Phak Tai, Section Two (สวนป่าพระนาภิไธยภาคใต้ ส่วนที่ 2) is a lush rainforest with many rare plants and wildlife, especially birds. It is also the habitat of the Sakai. This forest occupies a large area at the boundary of Yala and Narathiwat.

Shogun oranges (ส้มโชกุน) is Yala’s leading economic crop. They are similar to the green sweet oranges but have soft tastier flesh.


Kluai Hin
Saba banana
Saba banana, also known as Cardaba banana, is a triploid hybrid banana cultivar originating from the Philippines. It is primarily a cooking banana though it can also be eaten raw. It is one of the most important banana varieties in Philippine cuisine....
(กล้วยหิน) is a kind of banana, similar to Kluay Nam Wa, when boiled or glazed will have nutty taste.


Betong Noodles (หมี่เบตง), the egg noodles that are very tasty.


Betong Soy Sauce (ซีอิ๊วเบตง) is made from soybeans with special method.


The City Pillar Ceremony (งานสมโภชเจ้าพ่อหลักเมืองยะลา), held annually in May on the ground of the Yala Municipality Office, in which the model City Pillar is paraded. Stalls displaying goods for sale, exhibition, Government products, folk entertainment such as Manora Dance, Nung Talung, and Hulu Li Ke are also on hand.


Yala Product and Cultural Revival Festival (งานเทศกาลฟื้นฟูประเพณีและของดีเมืองยะลา) is held annually on the first weekend of August, on the grounds of the Yala Municipality Office. Folk cultures from the various groups in the border provinces of the south, mainly Chinese-Thai Buddhists and Thai Muslim, are performed. There are also contests for Chi La Dance, Best Dressed Banong, Si Bu-nga Siri (a special kind of potpourri), Rong-ngeng Dance, Annacit Singing contest in Malay and Thai languages, plus folk performances from various schools in the area. Exhibition of Yala’s best produce is not to be missed.