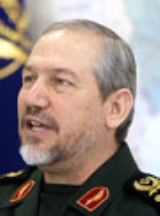 Encyclopedia
Major General
Major General
Major general or major-general is a military rank used in many countries. It is derived from the older rank of sergeant major general. A major general is a high-ranking officer, normally subordinate to the rank of lieutenant general and senior to the ranks of brigadier and brigadier general...
Yahya Rahim Safavi is an Iran
Iran
Iran , officially the Islamic Republic of Iran , is a country in Southern and Western Asia. The name "Iran" has been in use natively since the Sassanian era and came into use internationally in 1935, before which the country was known to the Western world as Persia...
ian military commander who served as the Chief commander
Commander
Commander is a naval rank which is also sometimes used as a military title depending on the individual customs of a given military service. Commander is also used as a rank or title in some organizations outside of the armed forces, particularly in police and law enforcement.-Commander as a naval...
of the Sepah from September 1, 1997 until September 1, 2007.

Safavi was Born in 1952 in Bagh-e Bahadoran located in the province of Isfahan, Iran
Iran
Iran , officially the Islamic Republic of Iran , is a country in Southern and Western Asia. The name "Iran" has been in use natively since the Sassanian era and came into use internationally in 1935, before which the country was known to the Western world as Persia...
.

Dr. Seyed Yahya (Rahim) Safavi was one of the leaders of the Iraq-Iran War and played a key role in the 2001 uprising in Herat in November 2001. He was replaced as commander of the Iranian Revolutionary Guards (IRGC) by Major General Mohammad Ali Jafari
Mohammad Ali Jafari
General Mohammad Ali Jafari is the commander of the Army of the Guardians of the Islamic Revolution of Iran. He was appointed by the Supreme Leader of Iran, Ali Khamenei, on September 1, 2007, to succeed Major General Yahya Rahim Safavi....
, former director of the Strategic Studies Center of AGIR on September 1, 2007. Radio Farda
Radio Farda
Radio Farda is the Iranian Branch of Radio Free Europe/Radio Liberty's broadcast services. It broadcasts 24 hours a day in the Persian language from its headquarters Prague, Czech Republic. Radio Farda first aired December 2002. Radio Farda broadcasts political, cultural, social, and art news...
, a radio news service run by Iranian exiles, reported that Safavi is thought to have become too openly sympathetic to the Mahmoud Ahmadinejad administration, when Iranian military officers are obliged to shun politics. According to Radio Free Europe
Radio Free Europe
Radio Free Europe/Radio Liberty is a broadcaster funded by the U.S. Congress that provides news, information, and analysis to countries in Eastern Europe, Central Asia, and the Middle East "where the free flow of information is either banned by government authorities or not fully developed"...
, Radio Farda "quoted observers saying that Yahya-Safavi's almost partisan positions had caused unease or even rifts in the IRGC ranks, and the appointment is meant to resolve that."