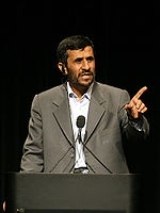 Overview
Mahmoud Ahmadinejad is the sixth and current President
President of Iran
The President of Iran is the highest popularly elected official in, and the head of government of the Islamic Republic of Iran; although subordinate to the Supreme Leader of Iran, who functions as the country's head of state...
of the Islamic Republic of Iran
Iran
Iran , officially the Islamic Republic of Iran , is a country in Southern and Western Asia. The name "Iran" has been in use natively since the Sassanian era and came into use internationally in 1935, before which the country was known to the Western world as Persia...
, and the main political leader of the Alliance of Builders of Islamic Iran
Alliance of Builders of Islamic Iran
The Alliance of Builders of Islamic Iran , usually shortened to Abadgaran , is an alliance of some right-wing Iranian political parties and organizations. The alliance, mostly active in Tehran, won almost all of Tehran's seats in the Iranian Majlis election of 2004 and the Iranian City and Village...
, a coalition of conservative political groups in the country.
An engineer and teacher from a poor background, Ahmadinejad joined the Office for Strengthening Unity
Office for Strengthening Unity
The Office for Strengthening Unity , is an Iranian student organization created in 1979, and has been described as "the country's most well-known student organization," and "Iran's leading prodemocracy student group"...
after the Islamic Revolution. Appointed a provincial governor, he was removed after the election of President Mohammad Khatami
Mohammad Khatami
Sayyid Mohammad Khātamī is an Iranian scholar, philosopher, Shiite theologian and Reformist politician. He served as the fifth President of Iran from August 2, 1997 to August 3, 2005. He also served as Iran's Minister of Culture in both the 1980s and 1990s...
and returned to teaching.
x