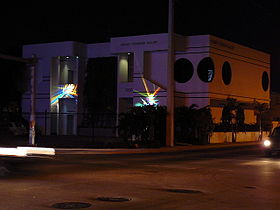 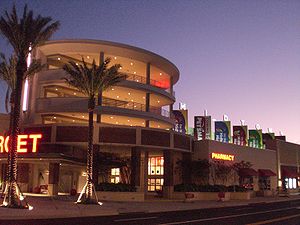 The Wynwood Art District is a district of the Wynwood neighborhood of Miami, Florida
Florida
Florida is a state in the southeastern United States, located on the nation's Atlantic and Gulf coasts. It is bordered to the west by the Gulf of Mexico, to the north by Alabama and Georgia and to the east by the Atlantic Ocean. With a population of 18,801,310 as measured by the 2010 census, it...
, United States
United States
The United States of America is a federal constitutional republic comprising fifty states and a federal district...
. It is home to over 70 galleries, museums and collections. It is roughly bounded by Northwest 36th Street (US 27
U.S. Route 27 in Florida
U.S. Route 27 in Florida is a north–south United States Highway. It runs from the South Florida Metropolitan Area northwest to the Tallahassee Metropolitan Statistical Area. Throughout the state, US 27 has been designated the Claude Pepper Memorial Highway by the Florida State Legislature...
(north), Northwest 20th Street (south), I-95
Interstate 95 in Florida
Interstate 95 is the main Interstate Highway on the east coast of the United States; it serves the Atlantic coast of Florida. It begins at a partial interchange with U.S. Highway 1 just south of downtown Miami, and heads north past Daytona Beach and Jacksonville to the Georgia state line at the St...
(west) and Northeast 1st Avenue (east).

The Wynwood Art District Association was founded in early 2003 by a group of art dealers, artists and curators Mark Coetzee and Nick Cindric. Mark Coetzee initiated the idea based on a similar project, Art Night, he had started in his home town- Cape Town, South Africa. Founding Members at the first meeting were Brook Dorsch of Dorsch Gallery, Weston Charles and Cooper
Cooper (artist)
COOPER is an American artist known for sculptures and assemblages that exist as meditations on death, man’s emotional capacities and struggles for power. COOPER was born and raised in Miami, FL...
of Locust Projects, Nick Cindric of Rocket Projects, Bernice Steinbaum of Bernice Steinbaum Gallery and Marina Kessler of Marina Kessler Gallery. The Association publishes an annual brochure with a map and a list of the Association’s members. It is home to over forty galleries, five museums, three collections, seven art complexes, twelve art studios and five art fairs.

Every 2nd Saturday of each month a community wide Art Walk is held. Galleries, art studios, alternative spaces and showrooms open their doors to the public for art, music and refreshments.