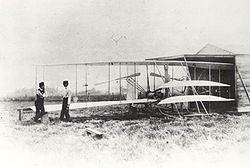 The Flyer II was the second powered aircraft built by Wilbur and Orville Wright
Wright brothers
The Wright brothers, Orville and Wilbur , were two Americans credited with inventing and building the world's first successful airplane and making the first controlled, powered and sustained heavier-than-air human flight, on December 17, 1903...
, in 1904. The design of the Flyer II was very similar to the original 1903 Flyer
Wright Flyer
The Wright Flyer was the first powered aircraft, designed and built by the Wright brothers. They flew it four times on December 17, 1903 near the Kill Devil Hills, about four miles south of Kitty Hawk, North Carolina, U.S.The U.S...
, but with a slightly more powerful engine and construction using white pine
Eastern White Pine
Pinus strobus, commonly known as the eastern white pine, is a large pine native to eastern North America, occurring from Newfoundland west to Minnesota and southeastern Manitoba, and south along the Appalachian Mountains to the northern edge of Georgia.It is occasionally known as simply white pine,...
instead of the spruce
Spruce
A spruce is a tree of the genus Picea , a genus of about 35 species of coniferous evergreen trees in the Family Pinaceae, found in the northern temperate and boreal regions of the earth. Spruces are large trees, from tall when mature, and can be distinguished by their whorled branches and conical...
they used in the 1903 machine as well as the gliders of 1900-1902. An important change was reducing the wing camber to 1-in-20 from the 1-in-25 used in 1903. The brothers felt that less camber
Camber (aerodynamics)
Camber, in aeronautics and aeronautical engineering, is the asymmetry between the top and the bottom surfaces of an aerofoil. An aerofoil that is not cambered is called a symmetric aerofoil...
would reduce drag though less lift was actually achieved. With these alterations Flyer II was heavier by some 200 pounds than the 1903 machine.

The Wrights tested the new aircraft at Huffman Prairie
Huffman Prairie
Huffman Prairie, also known as Huffman Prairie Flying Field or Huffman Field is part of Ohio's Dayton Aviation Heritage National Historical Park...
, a field outside of Dayton, Ohio
Dayton, Ohio
Dayton is the 6th largest city in the U.S. state of Ohio and the county seat of Montgomery County, the fifth most populous county in the state. The population was 141,527 at the 2010 census. The Dayton Metropolitan Statistical Area had a population of 841,502 in the 2010 census...
, which is now part of Dayton Aviation Heritage National Historical Park
Dayton Aviation Heritage National Historical Park
thumb|left|200 px|The Wright Flyer III, now in Carillon Historical Park, shown being flown by Orville Wright on October 4, 1905, over [[Huffman Prairie]] near Dayton...
and also part of the present-day Wright-Patterson Air Force Base
Wright-Patterson Air Force Base
Wright-Patterson Air Force Base is a United States Air Force base in Greene and Montgomery counties in the state of Ohio. It includes both Wright and Patterson Fields, which were originally Wilbur Wright Field and Fairfield Aviation General Supply Depot. Patterson Field is located approximately...
. They flew the 1904 machine 105 times that season, ultimately achieving flights lasting five minutes. They succeeded in flying full circles on some of these flights, which Wilbur accomplished for the first time on September 20. Also by September they had enlarged the front elevator which partially remedied the Flyer's undulations and sudden darting for the ground. Likewise as of September 7 they began using a weight and derrick(catapult) to assist the Flyer on takeoff when the winds were down or had changed direction in conjunction with the position of their launching track.

The Wrights disassembled the airframe of the Flyer II during the winter of 1904-05. They salvaged the propeller chain drive
Chain drive
Chain drive is a way of transmitting mechanical power from one place to another. It is often used to convey power to the wheels of a vehicle, particularly bicycles and motorcycles...
, its mounts, and the engine. The tattered fabric, wing ribs, uprights and related wooden parts were reportedly burned (according to Orville's memory) in the early months of 1905. The salvaged propeller parts and the engine went into the new airframe of the Wright Flyer III
Wright Flyer III
The Wright Flyer III was the third powered aircraft built by the Wright Brothers. Orville Wright made the first flight with it on June 23, 1905. The Flyer III had an airframe of spruce construction with a wing camber of 1-in-20 as used in 1903, rather than the less effective 1-in-25 used in 1904...
.