Camber, in aeronautics
Aeronautics
Aeronautics is the science involved with the study, design, and manufacturing of airflight-capable machines, or the techniques of operating aircraft and rocketry within the atmosphere...
and aeronautical engineering, is the asymmetry between the top and the bottom surfaces of an aerofoil. An aerofoil that is not cambered is called a symmetric aerofoil. The benefits of camber, in contrast to symmetric aerofoils, were discovered and first utilized by Sir George Cayley in the early 19th century in Great Britain
Great Britain
Great Britain or Britain is an island situated to the northwest of Continental Europe. It is the ninth largest island in the world, and the largest European island, as well as the largest of the British Isles...
.

Camber is usually designed into an aerofoil to increase the maximum lift coefficient
Lift coefficient
The lift coefficient is a dimensionless coefficient that relates the lift generated by a lifting body, the dynamic pressure of the fluid flow around the body, and a reference area associated with the body...
. This minimises the stalling
Stall (flight)
In fluid dynamics, a stall is a reduction in the lift coefficient generated by a foil as angle of attack increases. This occurs when the critical angle of attack of the foil is exceeded...
speed of aircraft using the aerofoil. Aircraft with wings based on cambered aerofoils usually have lower stalling speeds than similar aircraft with wings based on symmetric aerofoils.

An aircraft designer may also reduce the camber of the outboard section of the wings to increase the critical angle of attack (stall angle) at the wing tips. When the wing approaches the stall angle this will ensure that the wing root stalls before the tip, giving the aircraft resistance to spinning
Spin (flight)
In aviation, a spin is an aggravated stall resulting in autorotation about the spin axis wherein the aircraft follows a corkscrew downward path. Spins can be entered intentionally or unintentionally, from any flight attitude and from practically any airspeed—all that is required is sufficient yaw...
and maintaining aileron effectiveness close to the stall.

The camber of an aerofoil can be defined by a camber line, which is the curve that is halfway between the upper and lower surfaces of the aerofoil. Call this function Z(x). To fully define an aerofoil we also need a thickness function T(x), which describes the thickness of the aerofoil at any given point. Then, the upper and lower surfaces can be defined as follows: 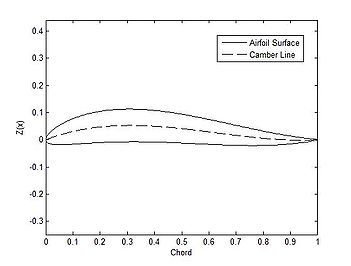 An aerofoil where the camber line curves back up near the trailing edge is called a reflexed camber aerofoil. Such an aerofoil is useful in certain situations, such as with tailless aircraft
Tailless aircraft
A tailless aircraft traditionally has all its horizontal control surfaces on its main wing surface. It has no horizontal stabilizer - either tailplane or canard foreplane . A 'tailless' type usually still has a vertical stabilising fin and control surface...
, because the moment
Moment (physics)
In physics, the term moment can refer to many different concepts:*Moment of force is the tendency of a force to twist or rotate an object; see the article torque for details. This is an important, basic concept in engineering and physics. A moment is valued mathematically as the product of the...
about the aerodynamic center
Aerodynamic center
The torques or moments acting on an airfoil moving through a fluid can be accounted for by the net lift applied at some point on the foil, and a separate net pitching moment about that point whose magnitude varies with the choice of where the lift is chosen to be applied...
of the aerofoil can be 0. A camber line for such an aerofoil can be defined as follows (note that the lines over the variables indicates that they have been nondimensionalized
Nondimensionalization
Nondimensionalization is the partial or full removal of units from an equation involving physical quantities by a suitable substitution of variables. This technique can simplify and parameterize problems where measured units are involved. It is closely related to dimensional analysis...
by dividing through by the chord):

An aerofoil with a reflexed camber line is shown at right. The thickness distribution for a NACA 4-series aerofoil
NACA airfoil
The NACA airfoils are airfoil shapes for aircraft wings developed by the National Advisory Committee for Aeronautics . The shape of the NACA airfoils is described using a series of digits following the word "NACA." The parameters in the numerical code can be entered into equations to precisely...
was used, with a 12% thickness ratio. The equation for this thickness distribution is:

Where t is the thickness ratio.