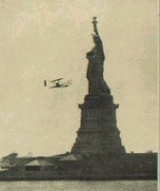 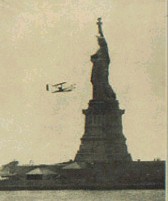 The Wright brothers
Wright brothers
The Wright brothers, Orville and Wilbur , were two Americans credited with inventing and building the world's first successful airplane and making the first controlled, powered and sustained heavier-than-air human flight, on December 17, 1903...
, Orville and Wilbur, invented the modern aeroplane
Fixed-wing aircraft
A fixed-wing aircraft is an aircraft capable of flight using wings that generate lift due to the vehicle's forward airspeed. Fixed-wing aircraft are distinct from rotary-wing aircraft in which wings rotate about a fixed mast and ornithopters in which lift is generated by flapping wings.A powered...
. Responsible for the first controlled, powered, heavier-than-air flight on 17 December 1903 at Kitty Hawk, North Carolina
Kitty Hawk, North Carolina
Kitty Hawk is a town in Dare County, North Carolina, United States. The population was 3,000 at the 2000 census. It was established in the early 18th century as Chickahawk....
, they made a number of other flights that played an important part in the history of aviation
Aviation
Aviation is the design, development, production, operation, and use of aircraft, especially heavier-than-air aircraft. Aviation is derived from avis, the Latin word for bird.-History:...
. This entry details the somewhat less well-known, but altogether still important flights of late September and early October 1909.

After news of their successes in flight had grown, Wilbur was approached by the Hudson-Fulton Celebration
Hudson-Fulton Celebration
The Hudson-Fulton Celebration from September 25 to October 9, 1909 in New York and New Jerseywas an elaborate commemoration of the 300th anniversary of Henry Hudson’s discovery of the Hudson River and the 100th anniversary of Robert Fulton’s first successful commercial application of the paddle...
Committee, a New York group whose purpose was to celebrate 300 years of history, including Henry Hudson
Henry Hudson
Henry Hudson was an English sea explorer and navigator in the early 17th century. Hudson made two attempts on behalf of English merchants to find a prospective Northeast Passage to Cathay via a route above the Arctic Circle...
discovering Manhattan
Manhattan
Manhattan is the oldest and the most densely populated of the five boroughs of New York City. Located primarily on the island of Manhattan at the mouth of the Hudson River, the boundaries of the borough are identical to those of New York County, an original county of the state of New York...
and Robert Fulton
Robert Fulton
Robert Fulton was an American engineer and inventor who is widely credited with developing the first commercially successful steamboat...
testing the steam engine
Steam engine
A steam engine is a heat engine that performs mechanical work using steam as its working fluid.Steam engines are external combustion engines, where the working fluid is separate from the combustion products. Non-combustion heat sources such as solar power, nuclear power or geothermal energy may be...
. The committee wanted the Wrights to demonstrate flights over the water around New York City
New York City
New York is the most populous city in the United States and the center of the New York Metropolitan Area, one of the most populous metropolitan areas in the world. New York exerts a significant impact upon global commerce, finance, media, art, fashion, research, technology, education, and...
. Orville was in Germany, so Wilbur would do the flights alone.

Another acclaimed aviator, Glenn Curtiss
Glenn Curtiss
Glenn Hammond Curtiss was an American aviation pioneer and a founder of the U.S. aircraft industry. He began his career as a bicycle then motorcycle builder and racer, later also manufacturing engines for airships as early as 1906...
had agreed to participate. He had recently set the world speed record, and the Wrights had just filed suit against him for patent infringement
Patent infringement
Patent infringement is the commission of a prohibited act with respect to a patented invention without permission from the patent holder. Permission may typically be granted in the form of a license. The definition of patent infringement may vary by jurisdiction, but it typically includes using or...
of their control systems. In fact, the public's anticipation was fueled by news of the patent disputes. These flights, to the audience of nearly a million, would be a showdown between the two flyers.

They were both scheduled to make a series of flights. On 29 September 1909, Wilbur made a famous flight on the Wright Model A Flyer around the Statue of Liberty
Statue of Liberty
The Statue of Liberty is a colossal neoclassical sculpture on Liberty Island in New York Harbor, designed by Frédéric Bartholdi and dedicated on October 28, 1886...
. To the amazement of the crowd, there was a red canoe attached to the bottom of the aeroplane's skis during this flight. This was due to the risk of going over, and possibly landing in, water. Wilbur reasoned that if there were any problems, he would use the canoe to float himself to safety. Later on, Orville put this canoe in Hawthorn Hill
Hawthorn Hill
Hawthorn Hill in Oakwood, Ohio, USA, was the post-1914 home of Orville, Milton, and Katharine Wright. Wilbur and Orville Wright intended for it to be their joint home, but Wilbur died in 1912, before the home's 1914 completion. The brothers hired the prominent Dayton architectural firm of...
, his house in Oakwood, Ohio
Oakwood, Montgomery County, Ohio
Oakwood is a city in Montgomery County, Ohio, United States. The population was 9,202 at the 2010 census. Oakwood is part of the Dayton Metropolitan Statistical Area. It was incorporated in 1908...
, as it reminded him of his and his brother's flights. This first airborne canoe was more recently moved to Carillon Historical Park
Carillon Historical Park
Carillon Historical Park is a 65-acre park and museum in Dayton, Ohio, which contains historic buildings and exhibits concerning the history of technology and the history of Dayton and its residents from 1796 to the present. The historical elements of the park were the brainchild of Colonel...
in Ohio and exhibited in a room adjacent to the Wright Flyer III
Wright Flyer III
The Wright Flyer III was the third powered aircraft built by the Wright Brothers. Orville Wright made the first flight with it on June 23, 1905. The Flyer III had an airframe of spruce construction with a wing camber of 1-in-20 as used in 1903, rather than the less effective 1-in-25 used in 1904...
in Wright Hall.

On September 29, Wilbur took off at 9:15 AM. This flight was in weather Curtiss had been unable to fly in. When Curtiss admitted defeat to the weather, Wilbur is supposed to have said to him, 'It looks pretty good. I think I will take a little spin in a few minutes.' He flew for about two miles, which took a little longer than seven minutes.

Later that day, Wilbur took off again, at 10:18. He flew over a large ocean-liner, the RMS Lusitania
RMS Lusitania
RMS Lusitania was a British ocean liner designed by Leonard Peskett and built by John Brown and Company of Clydebank, Scotland. The ship entered passenger service with the Cunard Line on 26 August 1907 and continued on the line's heavily-traveled passenger service between Liverpool, England and New...
, and directly towards the Statue of Liberty. Many in the crowd thought that he would crash into the statue, but Wilbur rolled the plane away from it. This caused a sensation in the press, and became legendary, despite the flight lasting less than five minutes.

Curtiss was unable to fly and had to go to St. Louis
St. Louis, Missouri
St. Louis is an independent city on the eastern border of Missouri, United States. With a population of 319,294, it was the 58th-largest U.S. city at the 2010 U.S. Census. The Greater St...
due to a prior agreement. He was supposed to have flown along the Hudson turn around and land at Governors Island
Governors Island
Governors Island is a island in Upper New York Bay, approximately one-half mile from the southern tip of Manhattan Island and separated from Brooklyn by Buttermilk Channel. It is legally part of the borough of Manhattan in New York City...
.

On Monday, October 4, Wilbur took off at 9:53 AM. He flew along the Hudson River
Hudson River
The Hudson is a river that flows from north to south through eastern New York. The highest official source is at Lake Tear of the Clouds, on the slopes of Mount Marcy in the Adirondack Mountains. The river itself officially begins in Henderson Lake in Newcomb, New York...
and around Manhattan. He completed a 42-mile flight and landed at Governor's Island. This was the exact flight that Curtiss had been unable to undertake, and Wilbur did finish it, and rather quickly.

This series of flights marked Wilbur's last flying before a public audience. An engine problem prevented him from doing any more in the series of flights after October 5, and he stopped. But it marked the beginning of a few new ideas. Not only were the public now interested in aviation, so were the military. Some think that when Wilbur flew over the Hudson it marked the beginning of aerial combat by showing the power and possibility of the aeroplane.

The flight around the Statue of Liberty was duplicated on May 26, 2003 by the Dayton 'Wright B Flyer, Inc.' group, with a replica of the Wright airplane as a part of the celebrations of the anniversary of the Wright brothers' first flight.
The source of this article is wikipedia, the free encyclopedia.  The text of this article is licensed under the GFDL.