The WFTU has declined precipitously in the past twenty years since the fall of the Communist regimes in the Soviet Union and Eastern Europe
Eastern Europe
Eastern Europe is the eastern part of Europe. The term has widely disparate geopolitical, geographical, cultural and socioeconomic readings, which makes it highly context-dependent and even volatile, and there are "almost as many definitions of Eastern Europe as there are scholars of the region"...
, with many of its former constituent unions joining the ICFTU. In January 2006 it moved its headquarters from Prague
Prague
Prague is the capital and largest city of the Czech Republic. Situated in the north-west of the country on the Vltava river, the city is home to about 1.3 million people, while its metropolitan area is estimated to have a population of over 2.3 million...
, Czech Republic
Czech Republic
The Czech Republic is a landlocked country in Central Europe. The country is bordered by Poland to the northeast, Slovakia to the east, Austria to the south, and Germany to the west and northwest....
to Athens
Athens
Athens , is the capital and largest city of Greece. Athens dominates the Attica region and is one of the world's oldest cities, as its recorded history spans around 3,400 years. Classical Athens was a powerful city-state...
, Greece
Greece
Greece , officially the Hellenic Republic , and historically Hellas or the Republic of Greece in English, is a country in southeastern Europe....
and now focuses on organizing regional federations of unions in the Third World
Third World
The term Third World arose during the Cold War to define countries that remained non-aligned with either capitalism and NATO , or communism and the Soviet Union...
, campaigning against imperialism, racism, poverty, environmental degradation and exploitation of workers under capitalism and in defense of full employment, social security, health protection, and trade union rights. The WFTU continues to devote much of its energy to organizing conferences, issuing statements and producing educational materials.

The following Trade Unions Internationals are constituted within the WFTU: 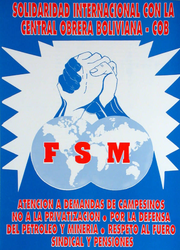