During the World Bank
World Bank
The World Bank is an international financial institution that provides loans to developing countries for capital programmes.The World Bank's official goal is the reduction of poverty...
Annual Bank Conference on Development Economics in Oslo
Oslo
Oslo is a municipality, as well as the capital and most populous city in Norway. As a municipality , it was established on 1 January 1838. Founded around 1048 by King Harald III of Norway, the city was largely destroyed by fire in 1624. The city was moved under the reign of Denmark–Norway's King...
, Norway
Norway
Norway , officially the Kingdom of Norway, is a Nordic unitary constitutional monarchy whose territory comprises the western portion of the Scandinavian Peninsula, Jan Mayen, and the Arctic archipelago of Svalbard and Bouvet Island. Norway has a total area of and a population of about 4.9 million...
in 2002 large globalization-critical
Anti-globalization
Criticism of globalization is skepticism of the claimed benefits of the globalization of capitalism. Many of these views are held by the anti-globalization movement however other groups also are critical of the policies of globalization....
protests were held. A coalition of many organizations organized an alternative conference and a demonstration
Demonstration (people)
A demonstration or street protest is action by a mass group or collection of groups of people in favor of a political or other cause; it normally consists of walking in a mass march formation and either beginning with or meeting at a designated endpoint, or rally, to hear speakers.Actions such as...
with more than 10 000 participants, thus making it the largest mass mobilisation in Norway in recent history. Before the protests, there was much concern about violence and riot
Riot
A riot is a form of civil disorder characterized often by what is thought of as disorganized groups lashing out in a sudden and intense rash of violence against authority, property or people. While individuals may attempt to lead or control a riot, riots are thought to be typically chaotic and...
s, but the actual protest was almost entirely peaceful with a few minor incidents.

The World Bank
World Bank
The World Bank is an international financial institution that provides loans to developing countries for capital programmes.The World Bank's official goal is the reduction of poverty...
has held its Annual World Bank Conference on Development Economics
Annual World Bank Conference on Development Economics
The Annual World Bank Conference on Development Economics is an annual conference on development economics held by the World Bank. The first conference was held in 1988 in Washington, USA.- External links:*...
(ABCDE) since 1988.
The June 24–26, 2002 conference focused on poverty and on implementing the commitments made of the Monterrey Consensus
Monterrey Consensus
The Monterrey Consensus was the outcome of the 2002 Monterrey Conference, the United Nations International Conference on Financing for Development. in Monterrey, Mexico. It was adopted by Heads of State and Government on 22 March 2002. Over fifty Heads of State and two hundred Ministers of Finance,...
from March the same year.
The conference was held in the hills above Oslo, in a hotel at Holmenkollen
Holmenkollen
Holmenkollen is a neighborhood in the Vestre Aker borough of Oslo, Norway. In addition to being a residential area, the area has been a ski recreation area since the late 19th century, with its famous, eponymous, ski jump arena hosting competitions since 1892...
. It was originally planned to be held in Stockholm, Sweden, but was moved to Oslo so as not to interfere with the Swedish general election, 2002
Swedish general election, 2002
The Swedish general election of 2002 was held on Sunday 15 September to elect the 349 members to the Parliament of Sweden. This election was hels along with other elections in Sweden to the Municipalities and the County Councils. 5,385,430 of the 6,722,152 eligible to vote voted in this election .-...
.


The network claimed that the World bank is an undemocratic institution used by rich nations to control poor countries. Einar Braathen and Reidun Heiene of ATTAC Norway and the Oslo 2002 network also criticized the bank for believing too much in market-based
Free market
A free market is a competitive market where prices are determined by supply and demand. However, the term is also commonly used for markets in which economic intervention and regulation by the state is limited to tax collection, and enforcement of private ownership and contracts...
solutions.

Many protesters were expected from other countries, especially neighboring Sweden and Denmark, but also some other parts of Europe. Extra border patrols were put in place between Sweden and Norway, a border that is normally uncontrolled. There were lists of at least 500 persons who would not be allowed to enter the country. An 18-year-old Swedish man was arrested in Oslo and later deported to Sweden. Another nine were apprehended at the Svinesund
Svinesund
Svinesund is a sound separating the Swedish municipality of Strömstad in the province of Bohuslän in the county of Västra Götaland from the Norwegian municipality of Halden in the county of Østfold....
border crossing, but later released. A bus with 27 Danish citizens was stopped and their passports were copied by the police. Representatives for the protest organizers said the police should not arrest people who had committed no crime using anti-terrorist laws because it would label all protesters as criminals.

Some downtown merchants were afraid of vandalism. Vehicles were not be allowed to stop in downtown Oslo for five days, buses and trains were stopped during the march and garbage cans were removed from the streets.

900 Norwegian police officers trained before the conference at a temporary training ground on the closed Fornebu airport
Oslo Airport, Fornebu
Oslo Airport, Fornebu was the main airport serving Oslo and Eastern Norway from 1 June 1939 to 7 October 1998. It was then replaced by Oslo Airport, Gardermoen and the area has since been redeveloped. The airport was located at Fornebu in Bærum, from the city center. Fornebu had two runways, one...
. 20 courtrooms with judges were kept ready to handle urgent cases. A special holding facility was also constructed. The police primarily feared that unofficial protests after the large march would become violent, especially the anarchist Blitz movement
Blitz (movement)
Blitz is an anarchist, communist and socialist youth community in Oslo, Norway, founded in 1982. The group has often been criticized for their use of violent methods of political protest.- The house :...
. Another worry was provocation from counter-demonstrations by neo-nazi and extreme right-wing groups.

The organizers, Oslo 2002, said they did not expect violence and they have been assured by the police there would be no provocations. Masks were not allowed in the demonstration. 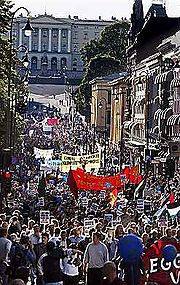 The protest march on June 24 started at 18.30 from Oslo Central Station and proceeded around central Oslo. Over 10,000 people participated in the march that was described by news writers as peaceful, colorful and carnival-like. At 19.45 the first marchers came back to Jernbanetorget
Jernbanetorget
Jernbanetorget is a large square in Oslo, Norway, in front of Oslo Central Station. It is the largest node for public transportation in Norway, with all tram lines passing through and connection to all train services in Oslo at the train station and all express- and regional busses departing from...
along Karl Johans Street. On the square there were speeches on the theme "Vår verden er ikke til salgs - stopp Verdensbanken" (Our world is not for sale - stop the World Bank).

The police kept a low profile but waited nearby. After the demonstration reached the end, at least ten stones where thrown towards a McDonalds restaurant, but no window was broken. They throwers were soon stopped by older participants.

Later in the evening was an unorganized after party in a central city park, which was also peaceful except for a quarrel between youths, apparently over a personal conflict rather than for political reasons.

An alternative conference called Open Forum (Åpent Forum) was held on Sunday 23 June. It focused on the negative effects of the World Bank and the International Monetary Fund
International Monetary Fund
The International Monetary Fund is an organization of 187 countries, working to foster global monetary cooperation, secure financial stability, facilitate international trade, promote high employment and sustainable economic growth, and reduce poverty around the world...
. The conference was opened by Kenneth Kaunda
Kenneth Kaunda
Kenneth David Kaunda, known as KK, served as the first President of Zambia, from 1964 to 1991.-Early life:Kaunda was the youngest of eight children. He was born at Lubwa Mission in Chinsali, Northern Province of Northern Rhodesia, now Zambia...
, former president of Zambia
Zambia
Zambia , officially the Republic of Zambia, is a landlocked country in Southern Africa. The neighbouring countries are the Democratic Republic of the Congo to the north, Tanzania to the north-east, Malawi to the east, Mozambique, Zimbabwe, Botswana and Namibia to the south, and Angola to the west....
. He said the World Bank's move away from structural adjustment programmes toward poverty reduction represents little more than window dressing and called for "a second liberation from global financial strangulation of mankind spearheaded by the International Monetary Fund, the World Bank and the World Trade Organisation."

The Open Forum aimed to share experiences by various social organizations, national and international NGOs, Jubilee South
Jubilee 2000
Jubilee 2000 was an international coalition movement in over 40 countries that called for cancellation of third world debt by the year 2000. This movement coincided with the Great Jubilee, the celebration of the year 2000 in the Catholic Church...
, the Norwegian Cancel the Debt Coalition (SLUG), ATTAC; peace- and human rights organisations, anti-globalisation initiatives and World Bank critics like SAPRIN
Structural Adjustment Participatory Review International Network
The Structural Adjustment Participatory Review International Network , based in Washington, D.C., United States and launched by the World Bank and its former president, James Wolfensohn in 1997, is a coalition of civil society organizations, their governments and the World Bank researching about...
. They criticized the World Bank for being undemocratic and becoming too powerful, at the cost of the United Nations
United Nations
The United Nations is an international organization whose stated aims are facilitating cooperation in international law, international security, economic development, social progress, human rights, and achievement of world peace...
. According to the organizers, the fundamentally undemocratic development hurt the poorest people in the world. They refuted the banks claims of reform saying it did not learn from its mistakes.

A police representative was happy that the protest was calm and that everybody could enjoy the nice summer day in Oslo and protest at the same time. Gustav Fridolin
Gustav Fridolin
Per Gustav Edvard Fridolin is a Swedish Green Party politician. He is a member of the Swedish parliament since the 2010 election, representing the Skåne County North and East constituency.- Biography :...
of the Swedish Green Party
Green Party (Sweden)
-External links:**...
who participated in the protest commented that the Norwegian police had learned from the mistakes of the Swedish police in Gothenburg the year before
Protests during the EU summit in Gothenburg 2001
The protests during the EU summit in Gothenburg 2001, parts of which are often called the Gothenburg Riots , took place in the Swedish city of Gothenburg during the three days of the EU summit and EU–US Summit, June 14–16, 2001...
. In his closing speech of the ABCDE conference David Hulme from Manchester University called (somewhat jokingly) for a "strategy for reduced arrogance". Several speakers had called for a reform of the World Bank where the fight against world poverty is taken seriously.