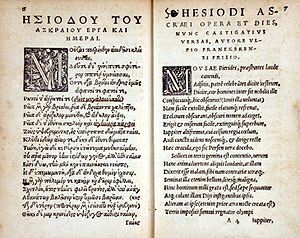 Works and Days is a didactic poem of some 800 verses written by the ancient Greek poet Hesiod
Hesiod
Hesiod was a Greek oral poet generally thought by scholars to have been active between 750 and 650 BC, around the same time as Homer. His is the first European poetry in which the poet regards himself as a topic, an individual with a distinctive role to play. Ancient authors credited him and...
around 700 BC. At its center, the Works and Days is a farmer's almanac
Farmer's Almanac
Farmers' Almanac is an annual North American periodical that has been in continuous publication since 1818. Published by the Almanac Publishing Company, of Lewiston, Maine, it is famous for its long-range weather predictions and astronomical data, as well as its trademark blend of humor, trivia,...
in which Hesiod instructs his brother Perses in the agricultural arts. Scholars have seen this work against a background of agrarian crisis in mainland Greece, which inspired a wave of colonial expeditions in search of new land. In the poem Hesiod also offers his brother extensive moralizing advice on how he should live his life. The Works and Days is perhaps best known for its two mythological aetiologies for the toil and pain that define the human condition
Human condition
The human condition encompasses the experiences of being human in a social, cultural, and personal context. It can be described as the irreducible part of humanity that is inherent and not connected to gender, race, class, etc. — a search for purpose, sense of curiosity, the inevitability of...
: the story of Prometheus
Prometheus
In Greek mythology, Prometheus is a Titan, the son of Iapetus and Themis, and brother to Atlas, Epimetheus and Menoetius. He was a champion of mankind, known for his wily intelligence, who stole fire from Zeus and gave it to mortals...
& Pandora
Pandora
In Greek mythology, Pandora was the first woman. As Hesiod related it, each god helped create her by giving her unique gifts...
and the so-called Myth of Five Ages
Ages of Man
The Ages of Man are the stages of human existence on the Earth according to Greek mythology. Two classical authors in particular offer accounts of the successive ages of mankind, which tend to progress from an original, long-gone age in which humans enjoyed a nearly divine existence to the current...
.

This work lays out the five Ages of Man
Ages of Man
The Ages of Man are the stages of human existence on the Earth according to Greek mythology. Two classical authors in particular offer accounts of the successive ages of mankind, which tend to progress from an original, long-gone age in which humans enjoyed a nearly divine existence to the current...
, as well as containing advice and wisdom, prescribing a life of honest labour and attacking idleness. It describes immortals who roam the earth watching over justice and injustice. The poem regards labour as the source of all good, in that both gods and men hate the idle, who resemble drones in a hive.

It also repeats the story of Prometheus
Prometheus
In Greek mythology, Prometheus is a Titan, the son of Iapetus and Themis, and brother to Atlas, Epimetheus and Menoetius. He was a champion of mankind, known for his wily intelligence, who stole fire from Zeus and gave it to mortals...
, which is also written in Theogony
Theogony
The Theogony is a poem by Hesiod describing the origins and genealogies of the gods of the ancient Greeks, composed circa 700 BC...
, and the theft of fire from Zeus and the resulting punishment of man with Pandora
Pandora
In Greek mythology, Pandora was the first woman. As Hesiod related it, each god helped create her by giving her unique gifts...
and her jar with Hope only left inside it.

Hesiod, the creator and narrator of Works and Days, describes himself as the heir of a farm bequeathed to him and his brother Perses. However, Perses apparently squandered his wealth and came back for what is owned by Hesiod. Perses went to law and bribed the lords to judge in his favour. The poem contains a sharp attack against unjust judge
Judge
A judge is a person who presides over court proceedings, either alone or as part of a panel of judges. The powers, functions, method of appointment, discipline, and training of judges vary widely across different jurisdictions. The judge is supposed to conduct the trial impartially and in an open...
s like those who decided in favour of Perses; they are depicted as pocketing bribes as they render their unfair verdicts.

Hesiod seems to have thought that instead of giving him money or property which he will again spend in no time, it is better to teach him the virtues of work and to impart his wisdom which can be used to generate an income.

Hesiod discusses a vast range of subjects including Astronomy, Farming, Justice, Good and Bad, Virtues of Work etc. He has employed a variety of techniques to convince Perses of the virtues of a just and good life. Fables, Etiologies, Threats of divine anger, Fatherly advice, Imagery etc.

Mainly Hesiod seems to have two passions, work and justice. The poem shows the need of justice in a tyrannical age in which "Might is Right." The story of the Hawk and the Nightingale describes the nature of those who possessed power.

Even though Hesiod has repeatedly spoken about injustice, and advised lords to be just, he has not shown any alternative path. Instead he insists that Perses should work, and that will relieve him from all his worries.

Works and Days contains the earliest recorded mention of the star Sirius
Sirius
Sirius is the brightest star in the night sky. With a visual apparent magnitude of −1.46, it is almost twice as bright as Canopus, the next brightest star. The name "Sirius" is derived from the Ancient Greek: Seirios . The star has the Bayer designation Alpha Canis Majoris...
, the brightest star in the heavens as seen from Earth
Earth
Earth is the third planet from the Sun, and the densest and fifth-largest of the eight planets in the Solar System. It is also the largest of the Solar System's four terrestrial planets...
. Sirius, in Greek, is Σείριος (Seirios, "glowing" or "scorcher").


Hesiod and the Problem of Scarcity

Hesiod is often labeled the first economist
Economist
An economist is a professional in the social science discipline of economics. The individual may also study, develop, and apply theories and concepts from economics and write about economic policy...
. Murray Rothbard
Murray Rothbard
Murray Newton Rothbard was an American author and economist of the Austrian School who helped define capitalist libertarianism and popularized a form of free-market anarchism he termed "anarcho-capitalism." Rothbard wrote over twenty books and is considered a centrally important figure in the...
elucidated the allusions to fundamental economic theory which are present in Hesiod's poem in his book "Economic Thought Before Adam Smith". Summarizing Rothbard; He lived in the small agricultural community of Ascra, a spot he describes as a "sorry place...bad in winter, hard in summer, never good." He was therefore sensitive to the everlasting problem of scarcity
Scarcity
Scarcity is the fundamental economic problem of having humans who have unlimited wants and needs in a world of limited resources. It states that society has insufficient productive resources to fulfill all human wants and needs. Alternatively, scarcity implies that not all of society's goals can be...
on earth. A gulf exists between man's unending dreams and desires and the existing resources on earth required to make them a reality. The first half of Works and Days is devoted to the fundamental economic problem of the scarcity of resources for the pursuit of all human needs and desires. He characterizes society as one where "men never rest from labor and sorrow by day and from perishing by night." He notes that because of scarcity; time, labor, and production goods must be efficiently allocated. Hesiod analyzes the importance of labor and capital that puts an end to man's state of leisure
Leisure
Leisure, or free time, is time spent away from business, work, and domestic chores. It is also the periods of time before or after necessary activities such as eating, sleeping and, where it is compulsory, education....
. He points to basic need, social condemnation of indolence, and rising consumption standards as moving man towards economic development and growth. Hesiod mentions a spirit of competition, of "good conflict" that tends to reduce the problems of scarcity.

Hesiod was in favor of the rule of law and the dispensation of justice to provide stability and order within society. He spoke out against corrupt methods of wealth acquisition and denounced robbery.


These MSS. are divided by Rzach into the following families,
issuing from a common original: --