Women's Battalions were segregated all-female combat units formed after the February Revolution
February Revolution
The February Revolution of 1917 was the first of two revolutions in Russia in 1917. Centered around the then capital Petrograd in March . Its immediate result was the abdication of Tsar Nicholas II, the end of the Romanov dynasty, and the end of the Russian Empire...
by the Russian Provisional Government in a last ditch effort to inspire the mass of war-weary soldiers to continue fighting in World War I
World War I
World War I , which was predominantly called the World War or the Great War from its occurrence until 1939, and the First World War or World War I thereafter, was a major war centred in Europe that began on 28 July 1914 and lasted until 11 November 1918...
until victory could be achieved. In the spring of 1917 a number of women began pressing the new Provisional Government to expand female participation in the war, and particularly to form combat units of women volunteers. These women, along with a number of high-ranking members of the Russian government and military administration, believed that female soldiers would have significant propaganda
Propaganda
Propaganda is a form of communication that is aimed at influencing the attitude of a community toward some cause or position so as to benefit oneself or one's group....
value and that their example would revitalize the weary, demoralized men of the Russian army. Simultaneously, they hoped the presence of women would serve to "shame" hesitant male soldiers into resuming their combat duties. Fifteen formations were created in 1917, including the 1st Russian Women's Battalion of Death, a separate unit called the 1st Petrograd Women's Battalion formed a few weeks later in Petrograd
Saint Petersburg
Saint Petersburg is a city and a federal subject of Russia located on the Neva River at the head of the Gulf of Finland on the Baltic Sea...
, the 2nd Moscow Women's Battalion of Death created in Moscow
Moscow
Moscow is the capital, the most populous city, and the most populous federal subject of Russia. The city is a major political, economic, cultural, scientific, religious, financial, educational, and transportation centre of Russia and the continent...
, and the 3rd Kuban Women's Shock Battalion organized in Ekaterinodar. Four communications detachments were created in Moscow and Petrograd. Seven additional communications units were created in Kiev
Kiev
Kiev or Kyiv is the capital and the largest city of Ukraine, located in the north central part of the country on the Dnieper River. The population as of the 2001 census was 2,611,300. However, higher numbers have been cited in the press....
and Saratov
Saratov
-Modern Saratov:The Saratov region is highly industrialized, due in part to the rich in natural and industrial resources of the area. The region is also one of the more important and largest cultural and scientific centres in Russia...
, again employing privately organized women's units already existing in those cities. An all-female naval unit was created in Oranienbaum
Oranienbaum
Oranienbaum may refer to:Germany:* Oranienbaum, Germany, a town in Saxony-Anhalt, Germany* Oranienbaum-WörlitzRussia:* Oranienbaum, Russia , a Russian royal residence* Lomonosov , the former name of the adjacent town...
, the 1st Women's Naval Detachment, as part of the Naval Infantry Training Detachment.

The women's battalions were never part of the White Army, Green Army, or Black Army
Revolutionary Insurrectionary Army of Ukraine
The Revolutionary Insurrectionary Army of Ukraine , popularly called Makhnovshchina, less correctly Makhnovchina, and also known as the Black Army, was an anarchist army formed largely of Ukrainian and Crimean peasants and workers under the command of the famous anarchist Nestor Makhno during the...
, the other Russian political groups fighting the Bolsheviks.

At the end of May, the Minister of War of the Russian Provisional Government, Alexander Kerensky
Alexander Kerensky
Alexander Fyodorovich Kerensky was a major political leader before and during the Russian Revolutions of 1917.Kerensky served as the second Prime Minister of the Russian Provisional Government until Vladimir Lenin was elected by the All-Russian Congress of Soviets following the October Revolution...
, authorized the formation of the 1st Russian Women's Battalion of Death in Petrograd. He placed Maria Bochkareva
Maria Bochkareva
Maria Leontievna Bochkareva was a Russian woman who fought in World War I and formed the Women's Battalion of Death.Of a peasant family, Maria Frolkova was born in the Novgorod Guberniya in 1889. She left home aged fifteen to marry Afanasy Bochkarev and they moved to Tomsk, Siberia where they...
, a peasant woman who had served in the Russian army since November 1914 and had risen to the rank of non-commissioned officer
Non-commissioned officer
A non-commissioned officer , called a sub-officer in some countries, is a military officer who has not been given a commission...
, in command of the unit. This first all-female combat unit initially attracted over 2,000 enlistees between the ages of eighteen and forty, but Bochkareva's strict discipline soon drove out all but about 300 dedicated volunteers.

Called into action against the Germans
Germany
Germany , officially the Federal Republic of Germany , is a federal parliamentary republic in Europe. The country consists of 16 states while the capital and largest city is Berlin. Germany covers an area of 357,021 km2 and has a largely temperate seasonal climate...
during the Kerensky Offensive
Kerensky Offensive
The Kerensky Offensive was the last Russian offensive in World War I. It took place in July 1917.- Background :...
, they were assigned to the 525th Kiuruk-Darinski Regiment and occupied an abandoned trench near Smorgon
Smorgon
-People:* David Smorgon, an Australian businessman, President of the Western Bulldogs football club* Graham Smorgon, an Australian businessman, former President of the Carlton Football Club* Victor Smorgon, an Australian industrialist-Places:...
. The battalion pushed past three trenches into German territory, where the trailing Russian army discovered a hidden stash of vodka
Vodka
Vodka , is a distilled beverage. It is composed primarily of water and ethanol with traces of impurities and flavorings. Vodka is made by the distillation of fermented substances such as grains, potatoes, or sometimes fruits....
and became dangerously drunk. The newly-promoted Lieutenant Bochkareva ordered that any further stashes be destroyed. Outnumbered and unsupported, the battalion met stiff resistance from the Germans and were repelled. They returned to their original lines with two hundred prisoners and minimal casualties, six killed and thirty wounded. 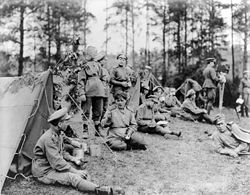 The creation of the first all-female combat unit under Bochkareva inspired a number of other women in Russia to appeal to the government for inclusion in the armed forces. The Ministry of War was flooded with letters and petitions from individuals and groups of women seeking to serve their nation at the front. In June Kerensky approved the organization of an additional women's combat unit in Petrograd, the 1st Petrograd Women's Battalion with a complement of between 1,100 and 1,400 women and two communications detachments of 100 women volunteers each.

A half-company of this unit (137 soldiers) participated in the defense of the Winter Palace
Winter Palace
The Winter Palace in Saint Petersburg, Russia, was, from 1732 to 1917, the official residence of the Russian monarchs. Situated between the Palace Embankment and the Palace Square, adjacent to the site of Peter the Great's original Winter Palace, the present and fourth Winter Palace was built and...
during the Bolshevik Revolution on October 25, 1917, having been called to the palace square under the false pretense of a review before being sent to the front. Despite their attempted resistance, the numerically superior pro-Bolshevik forces quickly overwhelmed them. The members of the women's battalion were arrested but released shortly thereafter. The British military attaché in Petrograd, General Alfred Knox, credited their release to his own intervention. The women of the unit returned to their encampment outside of the city.

The 1st Russian Women's Battalion of Death, commanded by Bochkareva, was still at the front after the revolution, but disbanded shortly after as a result of increasing hostility from male troops.

The 2nd Moscow Women's Battalion of Death, as well as two separate communications detachments were created in Moscow in June, 1917.

Authorization from the government for the formation of women's military units provided impetus for private women's organizations to form their own quasi-military units, which appeared in numerous cities around Russia. In an attempt to satisfy popular demand and to bring these units under its control the Ministry of War expanded the number of women's military formations. A fourth combat battalion was formed in Ekaterinodar, the 3rd Kuban Women's Shock Battalion, created from a pre-existing grass-roots unit.


Fate of the women's battalions

These extensions failed to end the impromptu organization of quasi-military units of women volunteers, and the government found it impossible to control such formations. Even the official women's units proved problematic. There was no consensus among the military administration as to the potential value of female soldiers, and this, coupled with the severe shortages from which the nation was then suffering, meant that the army made only a half-hearted commitment to the project. Thus, the women's units received inadequate attention and assistance from the military administration. Many among the Russian military authorities were waiting to see how the women fared in battle and whether they would have a positive effect on male soldiers. The only women's combat unit to participate in battle was Bochkareva's 1st Russian Women's Battalion of Death. Although the women performed well in combat and suffered few casualties their example was not enough to inspire the mass of war-weary soldiers to continue fighting.

After the 1st Russian Women's Battalion of Death commanded by Bochkareva failed to have the intended effect of revitalizing the war-weary elements of the Russian army the military authorities began to question the value of the women's units. In particular, the government found it difficult to justify the allocation of badly needed resources to such an unreliable project. By August 1917, there was a growing inclination in the military establishment to discontinue the organization of women for combat purposes. At the end of the summer the authorities ended assistance to the units but allowed them to continue to exist. Facing withdrawal of official support the 2nd Moscow Women's Battalion of Death began to disintegrate in September and its members began to leave. Just prior to disbanding, however, about 500 volunteers were sent to the front at their own request but without the knowledge or permission of the military authorities.

The new Bolshevik government ordered the official dissolution of any remaining women's military formations on November 30, 1917. However, members of the 1st Petrograd and 3rd Kuban women's battalions lingered in their camps until early 1918, and then finally dispersed. Some women who had served in these units went on to fight on both sides of the Russian Civil War
Russian Civil War
The Russian Civil War was a multi-party war that occurred within the former Russian Empire after the Russian provisional government collapsed to the Soviets, under the domination of the Bolshevik party. Soviet forces first assumed power in Petrograd The Russian Civil War (1917–1923) was a...
.